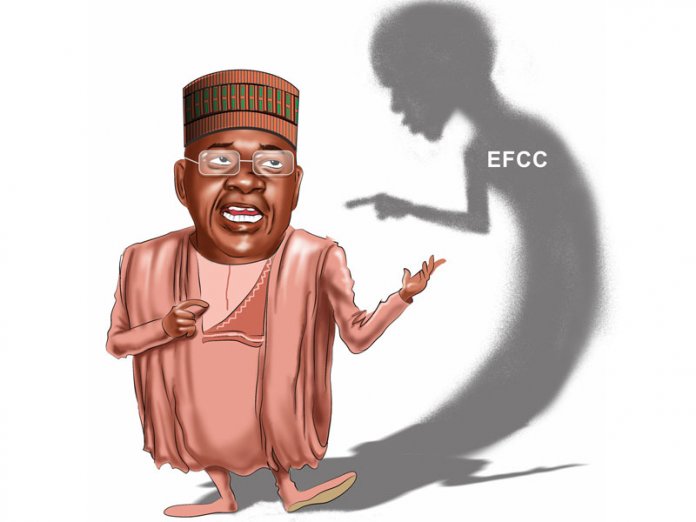 To win the anti-graft war, the Buhari administration must be firm and steadfast

For almost eight years, the Economic and Financial Crimes Commission (EFCC) had been prosecuting the former Governor of Gombe State, Senator Danjuma Goje for alleged N25 billion fraud. Last week, the anti-graft commission curiously withdrew from the case and handed it over to the office of the Attorney General of the Federation for continuation. “My Lord, this case was earlier adjourned for June 20 for the continuation of hearing, but then we are here today on the latest development on the matter,” said EFCC counsel, Wahab Shittu. “As you can see in court is a state counsel from the AGF’s office to formally take over this case from us”.

The EFCC withdrawal from the corruption trial came a day after the former governor met with President Muhammadu Buhari who urged him to step down for Ahmed Lawan in the race for Senate President in the ninth National Assembly. Goje would later claim he stepped down for Lawan “out of respect for the party and President Buhari.” Even though the EFCC has explained that the AGF office has constitutional power to take over any criminal case at any stage of investigation, the timing was very suspicious. With insinuations in the social media about some dirty deals to get Goje off the hook, the conclusion to draw is that the fight against corruption has been compromised on the altar of partisan politics.

What transpired last week in the court is a demonstration of all that is wrong with this administration’s fight against corruption. That the withdrawal came a day after Goje met with the president at the Villa confirms what the opposition has been saying: This government is at ease with corruption so long as it is “within the family”. For now, the fight seems designed to give only the appearance of dealing with a problem. Indeed, the scourge of corruption has grown in monstrosity because the administration has failed to speak with precision and clarity about the problem when politics is involved. It is a cynical dimension of the Buhari administration: If you are on their side, no matter how much you have undermined the system and abused public trust, you can walk the streets with arrogance and nothing will happen to you.

As with the embarrassing case of the fugitive former Chairman of Pension Reform Task Team, Mr Abdulrasheed Maina to that of the former Secretary to the Government of the Federation (SGF), Mr Babachir Lawal, who is reluctantly being tried after a sustained public uproar, and many others, it is clear that President Buhari cannot yet make a distinction between the rules of accountability in public office and patronage to those who supported or financed his political interests. But once the two realms are mixed and confused, it becomes difficult for the administration so afflicted to convince the public that it stands for probity or anti-corruption.

The case of Mr John Yakubu Yusuf is even more unnerving. More than a year after the former Assistant Director in the federal civil service was sentenced to jail by the Court of Appeal for embezzling the sum of N24 billion from the Police Pension Funds, he is still walking the streets a free man. With the EFCC and the Nigerian Prisons Service (NPS) trading blame for the disgrace, the lack of seriousness in the fight against corruption is evident.

Yet this government cannot go on drowning the country in the mess of its own internal contradictions while blackmailing Nigerians into seeing it as a vehicle for change simply by holding to account only members of the opposition. The outrage that greeted the suspension, and later retirement, of the former Chief Justice of Nigeria, Justice Walter Onnoghen was partly as a result of the current administration’s double standards and selective war on corruption.
But as we keep arguing in this space, mounting instances of tardiness in taking prompt decisions on matters of transparency and accountability have begun to taint the personal integrity which President Buhari brought to the job. All the raging issues of deficits of enlightened governance and lack of fidelity to rudimentary public morality run counter to his avowed commitment to right the wrongs of our past.