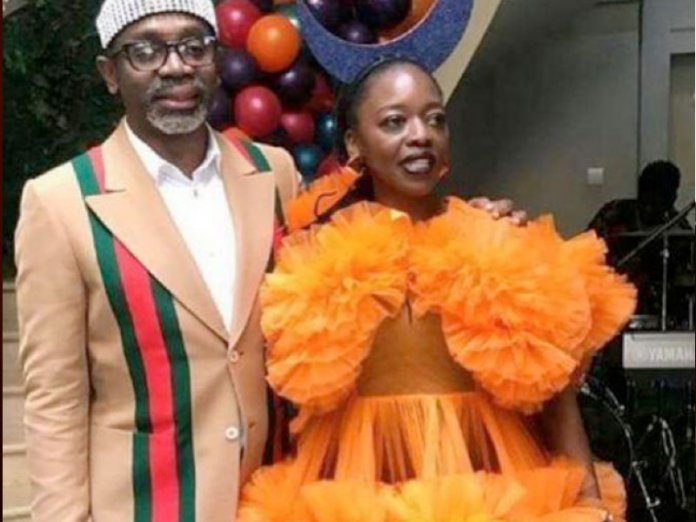 Salamatu Gbajabiamila, wife of the newly elected speaker of the House of Representatives, Femi Gbajabiamila, this week caused pandemonium with how she came dressed to the inauguration of the ninth assembly on Tuesday, June 11.

She had come out in full force to support her husband, Femi Gbajabiamila, who was being inaugurated as a member of the green chamber of the National Assembly for a fifth time, a remarkable record. The feat makes Femi one of the longest-serving members at the national assembly since inception of the fourth republic in 1999.

Later in the day, Femi soundly defeated his opponent Umar Bago with 283 votes to 78 as his colleagues overwhelmingly chose him as the speaker of the House of Representatives in an election that was most noteworthy for the lack of rancour that attended past instances of elected representatives choosing their leaders.

However, what caught the eye before and after the process was Salamatu, the wife of the new speaker. She was powerfully dressed to the occasion with a nod to her cultural heritage. She spotted a gold head tie and splendid black native dress sprinkled with gold flowers. However, what got people talking the most was her “larger than life” sunglasses. The big eyewear functioned like a mask, obscuring most of her face.

Expectedly, tongues have been wagging since the photos went viral. While some commended her for trying new things and differentiating herself from the crowd, others lambasted the new speaker’s wife for going too far all in the name of fashion.

Recall that, just over a year ago, Salamatu became the centre of controversy when her husband gifted her a brand new Benz G-Wagon on her 50th birthday. The Gbajabiamilas became fodder for a lot of public scorn due to the perceived wastefulness and ostentatious lifestyle during a time of austerity from someone supposed to be a role model in the country.