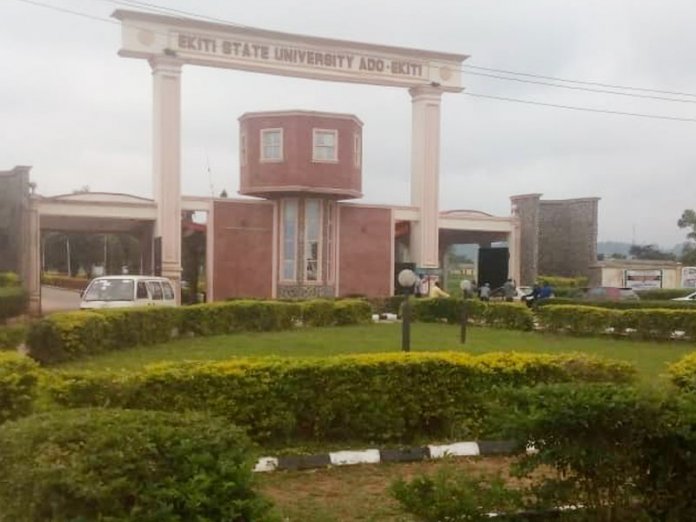 The Ekiti State University (EKSU), Ado-Ekiti, Saturday disclosed that it had started investigating one of its academic staff, Dr. O.O. Aduwo for alleged sexual harassment brought against him.

Also, the institution disclosed that it would constitute a panel of investigation to unravel a trending footage that showed the nudity of the lecturer with some female students, who accused him of sexual harassment.

This was contained in a statement the Head of EKSU Directorate of Information and Corporate Affairs, Mr. Bode Olofinmuagun issued yesterday with a promise to get to the roots of the allegation.

Aduwo, a senior lecturer in the Department of Accounting, had been in the news since Thursday after a trending video showed the nakedness of the lecturer alongside some students accusing him of sex for marks.

The footage, which played for about 29 seconds, showed some people dragged the lecturer out of a room with one of them chanting EKSU lecturer attempting to have sex with a female student.

In its statement yesterday, however, the institution revealed that it had started into the fo≠≠≠otage and that it had already queried the suspect to give him fair hearing and ensure justice and equity.

The statement assured that the management of the institution “will not condone any act of sexual harassment in the university and as such, issued a query to the concerned lecturer to defend himself from the allegation, as a first step in the spirit of due process.

“After the response of the lecturer to the query, a panel of investigation will be constituted to get to the root of the matter, while the findings of the panel will be made public,” the statement said.

Besides, the statement assured that the management would continue to be transparent and would not allow such a matter that could smear its good image to be swept under the carpet.

The statement read in part: “The attention of the management of Ekiti State University, Ado Ekiti has been drawn to a video that has gone viral on an alleged sex scandal involving one of its lecturers. The video allegedly fingered one Dr. O. O. Aduwo of the Department of Accounting.

“The management wishes to inform the general public that it will not condone any act of sexual harassment in the University and as such, issued a query to the concerned lecturer to defend himself from the allegation, as a first step in the spirit of due process.

“Thereafter, a panel of investigation will be constituted to get to the root of the matter, while the findings of the panel would be made public. The general public is hereby assured that management will continue to be transparent. It will not also allow such a matter that can smear its good image to be swept under the carpet,” the statement said.

It was gathered that Aduwo is a lecturer at the department of Accounting of the institution. Some female students of the varsity who were believed to have laid siege to the residence of the female student were seen dragging the embattled lecturer out of a room.

It was learnt that the lady’s boy friend and his friends were said to have informed the lady to play along with the lecturer when he made overtures to her in exchange for marks.

In the 29-second footage, an audible voice chatted: “This is a lecturer of EKSU. He wants to have sex with a student.” The voice said a lot of unprintable things laying bare the escapades of the lecturer.

While making mockery and torturing the lecturer, one of the boys was seen pressing a powered electronic device to on his body to shock. Aduwo was screaming and begging the students for mercy. But his pleas were rebuffed.

Some students of the institution, who spoke on the condition of anonymity, confirmed the identity of the lecturer in the video as a popular person. They berated the level at which lecturers in the institution demand for sex in exchange of mark.

When contacted for confirmation, Dr. Aduwo phone was switched as the time of filing the report.