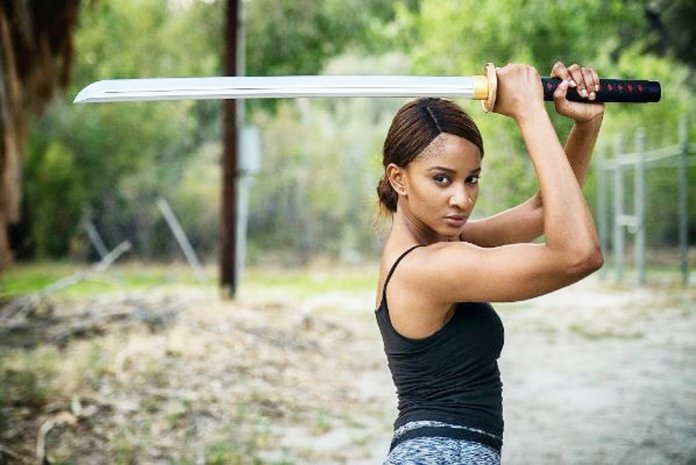 An upcoming feature film Muna might leave you asking whether it is a Nigerian production following images of the posters online. Now the two minutes, twenty five seconds official trailer released would further extend the question. Well, it features a number of Nigerian actors including Adesua Etomi-Wellington in the lead role with images of her in daring postures.

As revealed in the clip, she appears to be playing a martial art character. But, that might just not be enough to tell it is a Nigerian movie just as interesting as it shows Adesuwa playing the role, which is different from what she had played in the past. Muna has waited for two years to be released since the shooting which took place in Nigeria and Los Angeles was concluded in March 2017.

The official trailer further lends voice to the issue of human trafficking – which has been the theme of a number of Nollywood movies.

As a child, Muna (Adesuwa Etomi) is trafficked into a life of slavery and abuse. All grown up, she finds love but wants revenge and learned new skills to help confront the human trafficking ring that has various individuals from different races across the world. In one scene, she leaves a thinly bloody inscription of “Stop Human Trafficking” on the forearm of a man after killing him.

Nollywood’s inability to get the martial art and few other techniques right had evidently been broken with this film. The action-thriller appears great, capturing Adesuwa in full display of her seemingly acquired martial art skills. Instructively, Adesua’s training in “physical theatre, musical theatre and performing arts” in the United Kingdom, surely aided her performance in ‘Muna’.

Adesuwa Etomi’s rising profile has seen her in April 2019 ranked alongside Hollywood’s superstar, Scarlett Johansson as one of the world’s most famous actresses in a special article and interview by Vogue magazine with the title, “14 Countries, 14 Superstars: The Global Actors Who Know No Limits”.