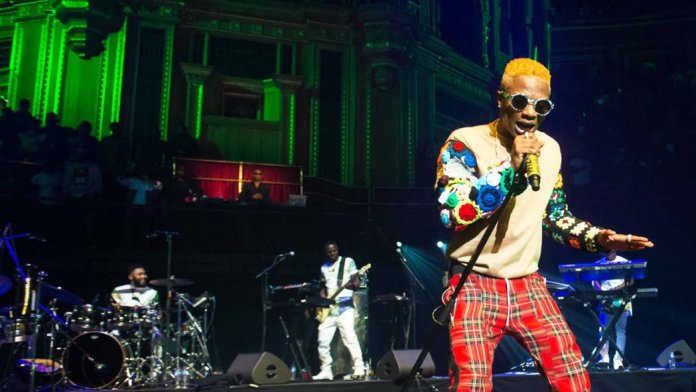 That Wizkid was on a career lull in the first few months of the year may not be newsy to those following activities in the show biz world. According to reports, the music icon embarked on short break on medical advice, which also forced him to close his eyes to social media frenzy for the period.

Back and stronger, he has since been on his feet and facing the 2019 challenges with all vim and vigour. This can be spotted in his first major and international outing of the year, involving himself and Canadian rapper, Drake, at O2 Arena in London. The collaboration was such a hot one still making a good reference till date.

In that same energy, the self-acclaimed King of Music stormed ‘The Ends Festival’ in Lloyd Park, London, last Saturday, where he got over 15,000 fans hooked to his eccentric delivery.

The Ends Festival is a new music and food festival in London, which in the words of the organisers, aimed to inspire and give a platform to local talents while showcasing them alongside some of music’s biggest stars. Some of the international artistes that graced the occasion, other than Wizkid, were Nas, Damian Marley, Saint Jhn and Wande coal, amongst others.

The three – day event might have come and gone, the festival is still enjoying rave reviews across globe, especially the gig brought in by Nigerian owned Wizkid which literally tore the stage apart, with the Nigerian flag glamorously swung in the air.

The Star boy who got to headline the show on its second day unbeatably captured moments by his amazing performance that got fans soaked in emotions and ecstasy. One could feel the infectious aura of the show around the electrified audience, who from all indications, would not mind the action to continue till eternity.

Strutting his stuff,  the Star Boy slayed as he rocked a catalogue of his hit tracks including Manya, Fever, Ojuelegba, Daddy Yo, and Don’t dull, amongst others, to the excitement of the cheering crowd who simply sang along with him. Many who witnessed the concert and those who caught a glimpse of it on the internet described the show as being unmissable. In addition to the entertainment factor, it was such that draws global attention to Nigerian creativity.

Wizkid’s career abroad is fast gathering strength. Most event organisers now bank on his appearance to sell their shows. As part of his notable strides is being the first African to not only perform, but also sell out London’s most iconic venue, Royal Albert Hall as Headliner, joining musicians like Beatles, Adele and Elton. He is also credited to be the first Nigerian musician to score a number one hit on the popular US Singles chart, following his collaborations with Drake on ‘ One Dance’ in. 2016.  The feat also earned him a spot in the Guinness Book of World Record.

It was not too long after his collaboration with Drake, that the State of Minnesota declared a proclamation dedicating October 6 of every year as ‘Wizkid Day’, to honour his musical influence.