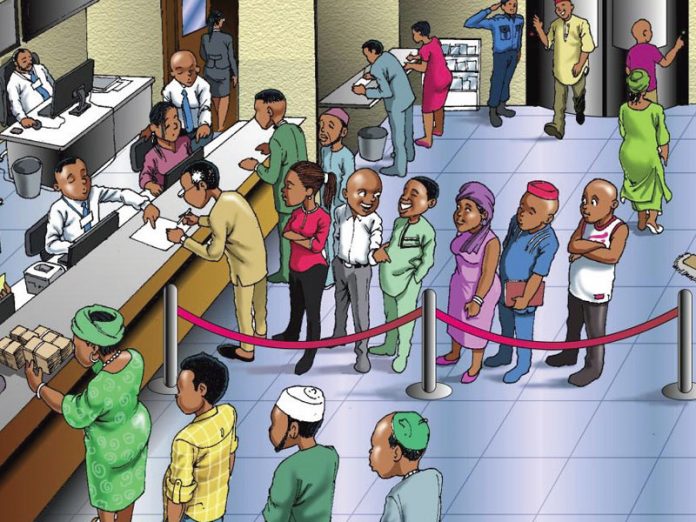 A London-based economic and political risk analyst that I have known for more than 10 years reached out to me a couple of weeks ago to ask this poignant question: “What’s going on in your country banking industry?” I wasn’t sure what he was after this time as he often calls me up to catch up on political and economic developments in Nigeria, whenever he was researching to do a report for clients.

“What are you on about this time around?” I asked him. “I’m doing a risk assessment for clients who are looking at making some money available to the banking industry and I have come across a lot of reports where the police are being used by debtors to prevent legitimate debt obligations being carried out by the banks. This is odd and is not good for your country.” He explained his observation.

In the last few months, there appears to have emerged, a new trend where the relationship between some banks and their debtor-customers goes awry over the latter’s failure to keep up with debt obligations. What is even stranger, and this was what the London economic and political risk analyst was alluding to, is that it would appear that the debtors, many of whom have been established to be chronic defaulters, take refuge in some law enforcement agencies, such as the police, the Economic and Financial Crimes Commission (EFCC), the courts, among others. I have seen and followed cases of these agencies appearing to completely ignore the issue of indebtedness of the chronic debtors and then go after banks, particularly their chief executives; in a manner often bothering on harassment and criminalization.

It was only 10 years ago that the world was hit by a global financial crisis, which reverberated in Nigeria and led to some drastic measures being taken, including the setting up of the Asset Management Corporation of Nigeria (AMCON) to take over delinquent debt-assets from the books of banks to keep some of them afloat. Some banks did not survive the crisis, and even now, the financial system and some parts of the economy are still reeling from its aftermath. The peculiarity of the Nigerian financial crisis, which hit the banking industry hard, was largely due to huge loans gone bad that were given to customers, many of whom simply refused to pay because they considered themselves the untouchable in society, who should get away with not observing the obligations that come with borrowing money from the banks.

Law enforcement agencies cannot, 10 years later, after all the noise that went down with the development, claim to have just forgotten or do not now understand that there are obligations tied to loans or bank advancements that are given to individuals and organisations. They cannot have forgotten the thousands of jobs that were lost in the banking industry because of the crisis that resulted from the many debt defaults on account of this behaviour. It would seem that the new tactics being applied is to create as much embarrassment as possible for banking executives, especially their chief executives, with a view to forcing the hands of these banks. The goal, it is now clear, is to force the banks to stand down from pushing forward with collecting what a chronic debtor owes. This cannot be what the various law enforcement agencies involved in this act want to see themselves being used for at this time of Nigeria’s development. It leads to asking the question, how much of the matter do these enforcement agencies really know in the cases between banks and debtor-customers before they step in to invite bank executives for the purpose of this orchestrated harassment?

It is obvious that there is a less than adequate understanding on the part of different law enforcement agencies about the issues involved in the matter between the two parties, especially the simple matter of customer obligation over loans taken from banks. Or they are deliberately choosing not to understand them with that strangeness of the Nigerian kind. Here is a simple scenario. A customer walks into a bank for a facility, which is availed to him with certain obligations to perform. A loan agreement is signed with all parties, including lawyers present and counter-signing, and clearly stated actions the lender can take to recover its money when the debtor fails to meet the obligation. What is now playing out is that at the point where the bank is exercising these actions, some law enforcement agencies are showing up with a chronic debtor to accuse, not just the bank, but its executives (obviously aimed at maximum embarrassment), of some indiscretion. In logic this would fall under some fallacies.

There is something particularly unwholesome that this development brings for the Nigerian economy, the banking industry and the executives who run banks. It is unhealthy for the economy because we are having law enforcement agencies appearing to provide a cushion and take sides with recalcitrant and chronic bank debtors, providing them a platform to avoid fulfilling their obligations on loans they obtained with their eyes wide open. For the economy, it is important that this situation should immediately attract the attention of its managers and the relevant authorities as it could easily lead to a gradual build up to the crisis of 10 years ago.

The international financial community feeds on information and information shapes perception. This new method of handling chronic debt matters, where the debtors appear to enlist the police, courts and others, sometimes including the EFCC, on their side so as not to meet their obligations is veritable ground for negative scores on the reputation table for Nigeria, its economy, its banking industry and its bank executives who are supposed to relate with their counterparts across the world on deal negotiation tables. While we are here hyping some banks, their CEOs and other executives as some of the best in the world for their performances, the stories the world is reading and seeing especially on social media are that they are routinely invited based on some rather strange charges raised by debtor-customers before law enforcement agencies.

In many cases they are accused of such a serious reputation damaging act as theft of their debtors’ goods. Some credit scores are damaged by this kind of information and they come into play in different global board rooms when determining whether an on-lending facility should come to Nigeria or go elsewhere. If a CEO who has been harassed in this manner, because he or she has been accused by a chronic debtor, whose collateral has been exercised for falling behind on his obligation, is sitting in a board room in London or New York or Hong Kong trying to negotiate an on-lending facility for his or her bank, how is he or she expected to look when asked to explain a report of theft contained in a risk analyst’s report? He will look small and embarrassed, of course! And that would rub off on Nigeria.

It is, therefore, being advocated here that this is a matter the relevant authorities must look at seriously. While the authorities are yet to wake up to this developing danger to Nigeria’s economy and its reputation, the group being directly targeted by this, the banking industry, has an onerous responsibility to act. Chronic, defaulting debtors who go from one bank to another throwing their political, economic connections and supposed business weights around to secure loans are well known.

But the lack of cooperation among banks, driven by the cut-throat competition among them, is allowing this to carry on. It, therefore, calls for cooperation and collaboration to identify and blacklist such well known loan offenders, who think they can use law enforcement agencies to avoid meeting their obligations. Cooperation and collaboration will allow for a list to be developed, a black book, more or less, with banks sharing information, and refusing to lend to these types of borrowers who are fund of hopping from one bank to another, once they are caught out by one financial institution or the other.

One of the strategies that have become clear is that once these agencies have been brought into the picture, the next thing is to go legal by charging bank executives to court, for sometimes frivolous reasons. Banks often appear to be caught unawares because they seem unprepared that the agencies and the law courts would be involved in the harassment and embarrassment of their executives, when they try to enforce loan agreements. It therefore calls for a deeper understanding of the legal framework that can be used to tackle this matter. There must be robust legal strategy and approach to tackling this matter. Banks in Nigeria, as a group, cannot allow it to just lie low. They must seek wise legal counsel of an industry-wide nature.

Aligned to the above will be engagement with the regulatory authorities who seem to have been silent so far on this harassment. It is highly important that regulators are brought into the picture so that this can become an economy-wide matter given its potential to injure the reputation of the country and thus damage the economy, if it is not already doing so; especially going by the question put to me by the London-based analyst. The involvement of regulators is important also because it provides a strengthening of position collectively on the matter. The regulators need to see this as damaging to the credit agency concept, which is currently in place in the country, because it would seem some chronic debtors are still getting away with deliberate infraction of the banking system borrowing rules with regard to their loan obligations.

This matter also throws up a lot of ethical issues which need serious attention, especially as they relate to loan defaults in the system. The action of the law enforcement agencies harassing bank executive on behalf of bank debtors leads to international observers raising corporate governance questions. In a world where the demand on the banking industry for their corporate governance credentials is high, the ethical issues that are emerging from all this must be concerning to the Central Bank of Nigeria (CBN) Bankers Committee. There are questions around the ethical behaviour that are coming up because of this development; and it needs deeper examination, exposition and understanding. The earlier this matter is tackled and nipped in the bud, the earlier that we can save the Nigerian economy, its banking industry and those who lead banking institutions and manage the banking industry from international embarrassment and damage to their reputations.