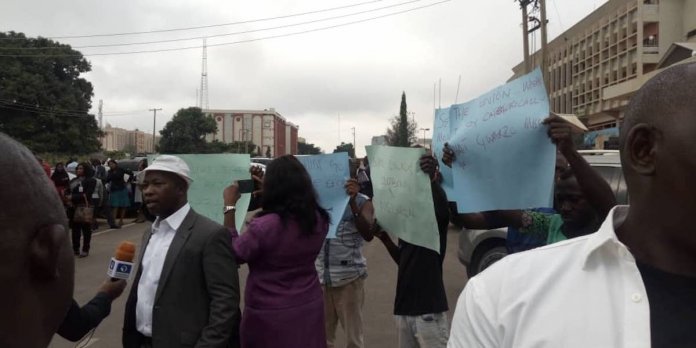 The headquarters of the Securities and Exchange Commission (SEC) was Monday shut down by the Commission’s workers’ union to avert the reinstatement of the suspended Director General (DG), Mounir Gwarzo.

As early as about 6 30 am, the SEC branch of the Association of Senior Civil Servants of Nigeria (ASCSN) had locked up the main gate and offices at the headquarters of the Commission located in the Central Business Area, Abuja.

For about 30 minutes, nobody was allowed access into the premises even as the protesting workers bore placards with various inscriptions.

The National Industrial Court had last Thursday ordered the reinstatement of Gwarzo, who was on November 29, 2017 suspended by a former Minister of Finance, Mrs. Kemi Adeosun over Alleged official misdemeanor An Administrative Panel of Inquiry set up by Adeosun had recommended Gwarzo’s dismissal, and also asked that the suspended SEC director-general be referred to the Independent Corrupt Practices and other related offences Commission (ICPC) for further investigation of the allegation of abusing his office, which among others, included using his position to influence the award of contracts to Outbound Investments Limited.

It also recommended that Gwarzo should refund N104,851,154.94, which was the severance package he approved and paid himself.

However, Gwarzo approached the National Industrial Court to quash his suspension.

In its ruling last Thursday, the National Industrial Court of Nigeria (NICN) ordered his immediate reinstatement.
In his judgment, Justice Sanusi Kado held that the former finance minister, joined as second defendant in the suit, lacked the power to suspend the claimant.

According to the judge, the issue in dispute was not about Gwarzo’s position as SEC’s DG, but that the issue was about the person with the power to suspend him.

He consequently declared Gwarzo’s suspension null, void and of no effect, and proceeded to order that he be reinstated as the DG of SEC to complete his five-year tenure.

The judge equally ordered that all salaries, allowances and entitlements accrued to Gwarzo should be paid to him in full.

The workers’ action, Monday was to forestall attempts to reinstate the suspended DG.

But the protest was later suspended by the union.

Gwarzo was not seen around the SEC headquarters.