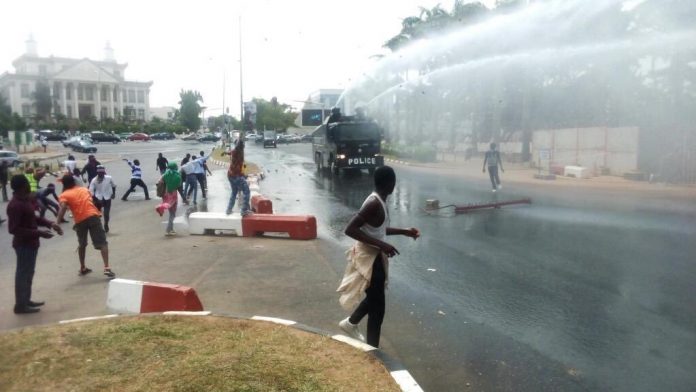 Members of Islamic Movement of Nigeria (IMN), known as Shiites, Friday burned a caricature of the US President Donald Trump, during a protest march in Wuse, Abuja.

They doused the effigy with petrol before setting it ablaze. They also burned the national flags of the United States and Israel during the protest march.

The incident which took place at the junction of the popular Wuse market caused a traffic gridlock in the area and forced many people to scamper for satety.

They labelled the Americans as enemies, accusing them of deliberately suppressing the rights of the Palestinians to self-determination. They also accused Israel of occupation of Arab territory and oppressive tendency.

Abdulahi Musa, who is the Secretary of Academic Forum of group, said the burning the flags was to show their solidarity for the Palestinian cause.

Musa said the Shiites decided to organise the march to pressure President Muhammadu Buhari to release their spiritual leader, Ibraheem El-Zakyzaky, and his wife, who have been detained since December 2015, following a fatal clash in Zaria between the group and the Nigerian Army.

He said that the decision of the President to keep El-Zakyzaky in custody was a violation of rule of law especially after several courts of competent jurisdiction had ordered his release.

The group vowed to continue with the protest irrespective of the intimidation by the security agents.

Also three coffins wrapped with Palestinian flags were on display which signified the three children of El-Zakyzaky who were killed by the security operatives during a protest in Zaria.

Palpable tension gripped Abuja on Friday morning as a roadblock by the military at the Nyanyan area on the Abuja-Keffi Road to deter the Shiites from grouping, created a traffic snarl along the route.

It will be recalled that clashes involving the adherents and security operatives in Abuja in October last year resulted in several casualties on the part of the Islamist group and disrupted public order.

Scores of Shiites were shot by the military in Nyanya and Kugbo and several areas of the metropolis during the convergence of the Shiites on the nation’s capital for the annual Arbaeen symbolic trek.