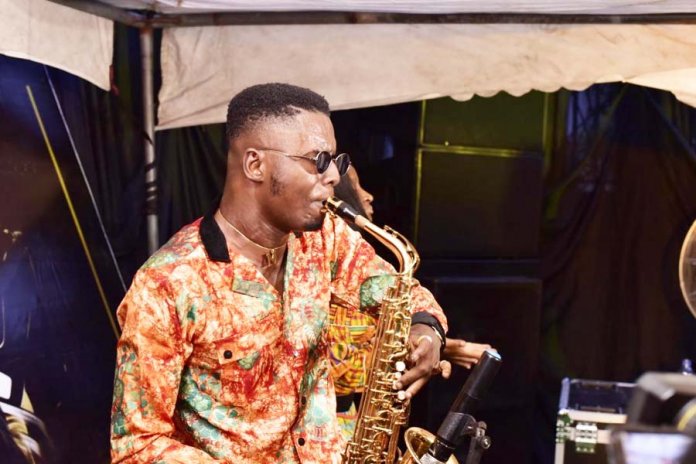 At the unveiling of his first music video, System, Temitope Ojudu aka Murello, didn’t leave anybody in doubt about his determination to carve a niche in the nation’s growing entertainment industry. Raheem Akingbolu reports

Though an upcoming artiste, Temitope Ojudu aka Morello, who recently hung his wig and gown for music, appears to be coming into the industry with a bang. With his debut music video –System, coupled with live performance, Morello didn’t only convince a cross section of Nigerians in business, politics, media and entertainment that have thronged the Lekki House Party in Lagos last Saturday evening; he was able to take care of all interests.

As observed by music critics in the house, the beauty of what Morello, son of Babafemi Ojudu, was bringing into the market is the democratisation of his music. Within few minutes of watching the video, one can feel its homely setting, mature language and quality production.

President and Executive Producer of the Prestigious All Africa Music Awards (AFRIMA), Mike Dada, aptly captured Morello’s style when he described his music as a musical basket that parade all that would make an upcoming artist rule the world.

“Perhaps because of his background, Morello has shown taste and class. The musical video though sophisticated, is culturally inclined as well. The setting is African and the message is not lewd. In short, it appeals to both old and young,” Dada said.

The gathering, which was a mix of youths and older generation in the creative industry, especially literature and music lovers, were thrilled to scintillating live performances of four tracks by Morello as well as screening of System, which drew applauses from the audience. Present at the premiere include his mother, Mrs.  Omotola Ojudu, Journalist and Author of Jail for Life, Kunle Ajibade, SIFAS Boss, Taiwo Afolabi and scores of Ojudu associates in politics, business and journalism.

Morello, who also won the hearts of the audience with his dexterity on the horn, while rendering one of his tracks, said he had lots of songs for every generation. He recalled that, at seven, his father, Ojudu, who is the Special Adviser to President Buhari, bought him a keyboard, while his mother, Omotola never allowed him to veer off. “I came to Lagos from Abuja for this screening of System because Lagos is where the market is. My dad was actually my inspiration because he bought the keyboard with which I first learnt how to play,” he said.

Now that he has pitched his tent with Music, will he combine it with Law? Responding, Morello admitted that it would be tough combining the two because of enormous reading and research that come with Law. “You don’t need any distraction. So, I guess as a brilliant guy I had to combine the two while in School and I was able to make it out of law school but practice may be a different ball game.”

He also admitted that being an upcoming artiste, there were still a lot of hurdles to cross before getting to the top. “Different things will come that you have to conquer so i’m expecting any challenge and I think i’m strong  and brilliant enough to handle whatever that comes.”

If there is anything Morello loves to talk about, it is the place of his father and Don Jazzy in his career. He is always eager to speak about his journalist father’s contribution to his Music and the influence Don Jazzy and Wizkid have on his career.

According to him, for now, his father remains a major game plan for him (Morello) in the industry. He pointed out that he has gotten a lot of support from him, adding that he hasn’t known yet what might come tomorrow.

Asked if his parents didn’t frown at his decision to take to Music after Law School, Morello said he was able to convince his parents through his commitment to music.

“Of course, there was initial resistance but I was able to convince them because of my seriousness.  As parents and role models for decades, they understand the fact that I’m not a frivolous person. The moment I said I wanted to do music, they knew it would be tough talking me out of it. At that stage they could only support me,”

Speaking on why he gave his nod to his son’s decision to go into music, Senator Ojudu said he was not shocked that his son took to music after graduating as a lawyer from the United Kingdom (UK) and the Nigerian Law School. “We are a liberal family when it comes to choosing courses. We allowed everyone to follow his or her heart and passion. When my children were younger, I used to buy them different instrument, which inspired them into music. When he arrived UK for his study, within a year of his study he had set up a band. But when he completed his degree in UK, he wanted to stay back. We had to convince him to return to Nigeria and attend Law School even if he wants to go into music full time,” he said.

Asked how he would support his son grow as a musician, the veteran Journalist said: “I will give him as much support as I can because it is his life and not mine to be a musician. It will interest you too that I also rebelled against my dad. He wanted me to study law and I told him I was going for journalism. And when I ran into troubles in journalism, he would say ‘but I warned you’.  My favourite music includes Afrobeat by Fela, reggae by Bob Marley and Peter Tosh.”