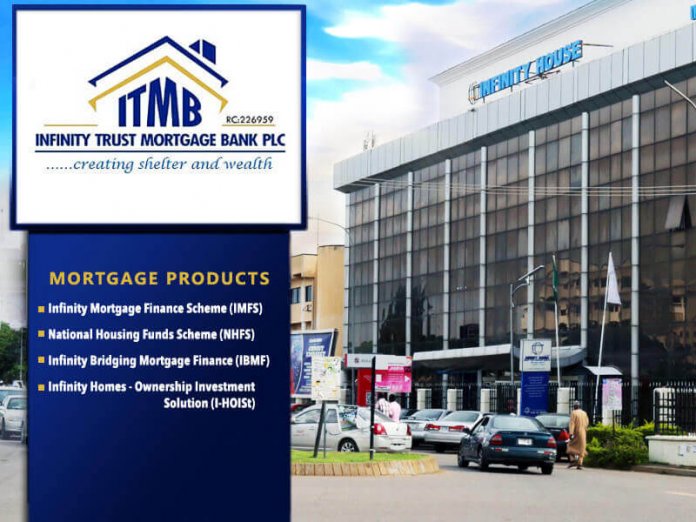 Infinity Trust Mortgage Bank Plc has said its loan portfolio increased by 201 per cent to N3.80 billion in 2018, compared to the N3.10 billion it realised in the preceding year.

The bank also recorded a profit before tax (PBT) of N366.7 million, indicating the 13th consistent year of profit reporting.
It gross earnings increased by 14 per cent to N1.005 billion, from N833.6 million in 2017, making it the first time the bank would cross the billion-naira mark.

Speaking at the 2018 Annual General Meeting (AGM), Chairman of the company, Dr. Adeyinka Bibilari, said total operating expenses also increased by 10 per cent to N577 million in the period under review, compared to N523 million in 2017.

According to him, the harsh operating environment notwithstanding, strategies in terms of the aggressive mobilisation of customer deposits paid off with deposits growing by 110 per cent to N2.467 billion from N1.176 billion in 2017.

This is as shareholders of the bank also approved dividend of 3 kobo per share which was proposed by the company.
The company’s Managing Director/Chief Executive, Dr. Olabanjo Obaleye, said with the dividend declared, the mortgage institution had paid dividend for the fifth year running as a listed company and for the 13th consecutive time since 2006.

“The bank is the only mortgage bank in Nigeria to achieve this feat,” he claimed.
He said the bank also published its first sustainability report in compliance with the recently issued Nigerian Stock Exchange (NSE) guidelines, the Global Reporting Initiative (GRI) standards and the UN Global Compact standards.

He also disclosed that the bank maintained its entity rating of A3 in the short term and Bbb+ (NG) in the long term; with a positive outlook and a service rating of SR3, adding that the routine risk based regulatory examination of the bank also returned moderate risk for the business operations of the bank.
Obaleye added that ITMB had maintained a robust asset base with total asset growing by 27 per cent as a result of the growth in investments, risk assets, deposits, on lending funds and shareholders’ funds.

He said: “The bank runs an excellent enterprise risk management strategy. Liquidity and capital adequacy ratios were well above the regulatory thresholds throughout the year. All other regulatory imposed ratios and internally stressed ratios were also met,” he said.