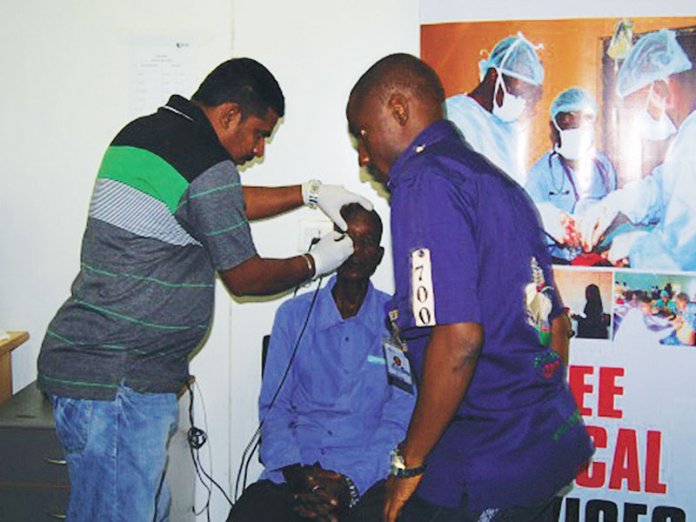 No fewer than 763 patients with eye related problems have received laser eye treatment in Abia following the availability of the procedure at a world class eye clinic with laser machines established in Umuahia.

This was made known by Senator Theodore Orji, popularly known as Ochendo, during his assessment of his free eye care programme in Umuahia.
Orji, who represents Abia Central Senatorial District, was instrumental to the installation of state-of-the-art eye treatment equipment at the centre in line with his philosophy of ‘health comes first before other social amenities’.

He said the health status of his constituents was of utmost priority to him, noting that the benefits of improved infrastructure and other dividends of democracy could only be more meaningful when the people are healthy.

He said: “If one is blind, he will not see the tarred road”, adding that he has made the healthcare of the people he represents a top priority.
Orji said he was satisfied with the success recorded so far in his free eye care programme following the emotional phone calls he had been receiving from beneficiaries, especially old people.

According to him, 604 people benefited from the free eye care programme which commenced last year while 159 persons have so far benefited in 2019.
“It means we are growing. The free eye care programme will be expanded to take care of people with diabetes and hypertension problems. We encourage the doctor in charge of the eye clinic and his team to do their best for humanity.

The Medical Director of the Eye Centre, Dr Anya Kalu, said that the facility boasts of the best medical equipment for eye treatment, including the latest model of Yag Laser machines.

The eye doctor said that the centre has, within six months, restored sight to 160 visually impaired persons, adding that its laser machine was the only functional one for eye treatment in the entire South-east zone.