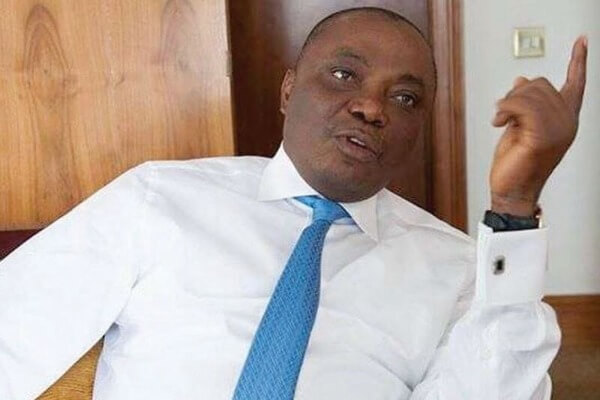 A Federal High Court in Lagos has ordered the Economic and Financial Crimes Commission (EFCC) to furnish the defence with the summary of evidence of its third witness in the trial of a Peoples Democratic Party (PDP) chieftain and senator, Peter Nwaoboshi.

The EFCC re-arraigned Nwaoboshi on October 5, 2018, before Justice Chukwujekwu Aneke in Lagos.

He is facing trial along with Golden Touch Construction Projects Ltd and Suiming Electricals over alleged N322 million money laundering.

He, however, pleaded not guilty.

The charge was formerly before Justice Mohammed Idris, but now before Aneke following the elevation of Idris to the Court of Appeal.

The EFCC has called two witnesses so far before Aneke.

However, defence counsel – Messrs George Uwechue (SAN), Clement Bassey and I.O. Aniakor – argued that the name of the witness was not listed in the proof of evidence.

They also submitted that Nogbeyintere’s statement was not in the processes filed, urging the court to disallow the witness.

The prosecution counsel had said that the witness was giving evidence as a representative of Zenith Bank, arguing that the bank could send any of its staff members to represent it.

“I do not know of any law that says a representative of any bank is bound to make a statement before giving evidence in court; such is not bound by law” he had said.

Aneke had adjourned for ruling.

Delivering the ruling yesterday, Aneke held that by the provisions of Sections 279 of the Administration of Criminal Justice Act (ACJA), the prosecution was obliged to file a proof of evidence.

The court held that the need for substantial compliance with the provisions of the ACJA could not be over-emphasised.

He also noted that the summary of the witness’s evidence was not included in the proof of evidence before the court.

“It is pertinent to note that Section 279 (2) of the ACJA gives the prosecution a discretion to file and serve notice of additional evidence.

defendant with the summary of evidence of PW3 (Prosecution Witness 3) in this matter in the interest of justice,” he ruled.

The judge held that to do otherwise might infringe on the rights of the defendant.

He consequently adjourned the case until June 14, for continuation of trial.

Aneke will on May 30, however, hear a motion seeking the release of Nwaoboshi’s international passport.

In the charge, the EFCC alleged that Nwaoboshi and Golden Touch Construction Projects purchased a 12-storey building known as Guinea House on Marine Road, Apapa, Lagos, for N805 million in May 2014 and June 2014.

The anti-graft agency claimed that N322 million out of the N805 million was part of proceeds of fraud.

The EFCC alleged that N322 million was transferred to property’s vendor on the instruction of Suiming Electricals, which was accused of aiding Nwaoboshi and Golden Touch Construction to commit money laundering on or about May 14, 2014.

According to the EFCC, Nwaoboshi got a contract through Bilderberg Enterprises Ltd. to supply new construction equipment to the state Direct Labour Agency at N1,580,000,000.

It alleged that the company imported and supplied used construction equipment rather than brand new ones in spite receiving full payment.

The EFCC added that Nwaoboshi, with the proceeds, bought a 12-floor building from Delta State Government at N805 million in the name of Golden Touch Construction Projects.

The commission claimed that the senator had no visible legitimate business venture to generate the amount spent to purchase the said property.

The alleged offences contravene the provisions of Sections 15(2) (d) and 18(a) of the Money Laundering (Prohibition) Act, 2011.