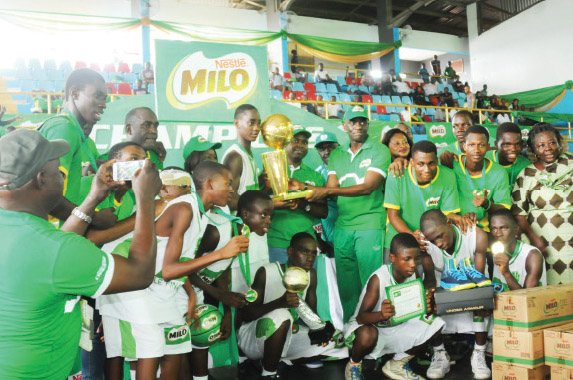 Reinhold International Secondary School Abiriba, Abia State was in scintillating form when it defeated Queens College Enugu 18-9, in the opening match of the Eastern Conference of the ongoing Nestle Milo Secondary Schools Basketball Championship which dunked off at the Indoor Sports Hall of the Nnamdi Azikiwe Stadium, Enugu last weekend.

The match took off in a frenzy but the Abia State representatives soon took over the initiative with their playmaker Favour Orji shouldering most of the task.

In the second match, Holy Rosary International School Owerri squared against the Twelve Apostles College, Ndiaborishagu, Abakaliki, Ebonyi State. The tie was a demonstration of grit and tenacity on the part of the Ebonyi State team. Their counterparts from Owerri led throughout the first quarter, but the girls from Abakaliki fought back and tied the scores at 9-9 mid way into the second quarter from where they took the lead and finished the match 21-11.

In the boys’ category, Bayelsa State represented by BDGS outscored their Imo state counterparts 22-14. But coach Tony Nelson said he was not happy in victory.

“I don’t think we played better than the Imo team. They were clearly the better side but we won through our technical superiority,” the youthful coach said.

“It was a very tough match. They came out to play but the technical bench failed to notice that their most dangerous man had committed enough offenses that saw him sent off. The moment he was out of the way, we had a leeway and that gave us the victory,” Nelson recalled.

In other results, Cross River State boys defeated their Enugu State counterparts 36-23, while their (CRS) girls saw off Akwa Ibom 0-9. Rivers State girls saw off Anambra 25-6 in another one-sided match

Edison Sofate Beauty of Rivers State who played so well noted that the Anambra representatives were not playing like a side determined to achieve a result. “Their minds were not in the game. I believe they could have done better if they concentrated on the game.”