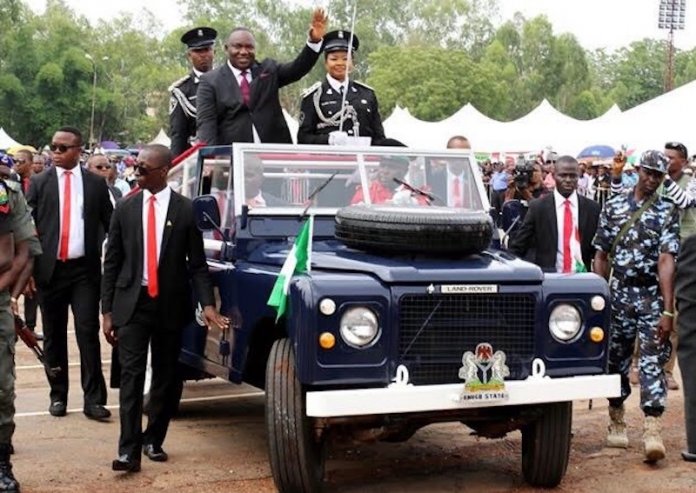 Tomorrow, May 29, Governor of Enugu State, Rt. Hon. Ifeanyichukwu Lawrence Ugwuanyi and his deputy, Mrs Cecilia Ezeilo, will be sworn-in into office for their second term, after being resoundingly and massively reelected in March 9 governorship election, following their remarkable achievements and good governance in office in the last four years.

It would be recalled that four years ago, precisely, May, 29, 2015, in an epochal event at Michael Okpara Square, Independence, Layout, Enugu, Ugwuanyi, after 12 years of quality representation at the House of Representatives as member representing Udenu/ Igbo-Eze North Federal Constituency was sworn in as the fourth executive governor of Enugu, amidst celebrations, hope and expectations. His cominginto office was confronted with myriad of daunting challenges that include recessed economy, paucity of funds, backlog of unpaid workers’ salaries, arrears of pensioners, infrastructural deficits, unemployment and others.

These apart, Ugwuanyi also became the first governor of Enugu State since 1999 to emerge on opposition platform following his party, Peoples Democratic Party (PDP)’s loss of the presidency to the All Progressives Congress (APC). Not deterred by these obvious discouraging and enormouschallenges, Gov. Ugwuanyi in his inaugural speech, committed the affairs of the state to the Almighty God and unveiled a four-point agenda of his administration, namely; employment generation, social services and good governance, rural development, security and social justice.

Without hesitation, Ugwuanyi’s administration hit the ground running, by bringing to bare the governor’s financial prowessand prudence in reforming, rejigging and repositioning the state’s Internal Revenue Service (IRS) system for better performance and improved revenue generation. This singular action improved significantly the states’ Internally Generated Revenue from N14b in 2016 to N18.4b in the first ten months of 2017 and now 22billion, thereby placing the state in a good financial stead, even without the monthly federation allocation as revealed by The Economic Confidential in its 2018 Annual States Viability Index (ASVI) released recently.

Also introduced in the day-to-day running of the government by Ugwuanyi were good governance, equity, fiscal discipline, accountability and transparency. Since then, governance in the state took a new direction geared towards peaceful co-existence, total integration, good governance and even development across the state. Ugwuanyi’s leadership style which is inclusive, progressive and eclectic is unprecedented in the state’s leadership history. In the last four years of his first term in office, Ugwuanyi’s administration has presence and footprints in virtually all the 450 autonomous communities, 17 local councils and three senatorial zones in the state.

All the sectors of the state economy had witnessed his government’s interventions like never before with rural development, education, health, infrastructure, security, workers’ welfare, youth empowerment, taking the lead. Across the state, roads like Opi-Nsukka dual carriage way, Obechara Road Junction-Umuakashi Mechanic village-Ikenga Hotels Junction-Enugu Road Nsukka Junction and Umuezebi-Nru Junction have been completed. Others include extension of Agbani-AforAmurri Road, the extension of Ituku Road, the construction of Ogonogoeji- Ndi Akpugo Road ( Atavu Bailey Bridge-AforOnovo) the construction of the 42-metre span Bailey Bridge and road works across River Nyama to Amichi, linking Umuogo and Umuagba Amaechi Uno/ Obinagu community, all in Nkanu west LGA. Of note is that the Agbani-Amurri Road was constructed newly for a community that has never witnessed any form of development or government presence on its land in the past 100 years. In the same vein, the Ogonogoeji-Ndiagu-Akpugo Road from Atavu Bailey Bridge to Afor Onovo is the first state government road in the entire Akpugo land since the creation of the Enugu State. Not left out is the popular and historic Milliken Hill Road, Ngwo, constructed in 1909, but was abandoned for several decades before Ugwuanyi’s administration reconstructed it with streetlight. The three-kilometre road is part of the 12-kilometre 9th Mile-Ekochin-Ngwo- Miliken Hill-New Market federal road which state government recently rehabilitated to serve as alternative route for commuters and motorists plying Enugu-Onitsha Expressway.

In the education sector, through the Enugu State Universal Basic Education Board (ENSUBEB), Enugu is among the states that have paid their counterpart fund making it possible for them to access the Federal Government Universal Basic Educationfund. In the last four years, ENSUBEB has built and renovated more than 400 primary school classrooms, provided learning and teaching facilities and recruited more than 2000 teachers and is currently recruiting 1500 teachers. Also recruited by Ugwuanyi’s administration through the Post Primary Schools Management Board ( PPSMB) are more than 1200 secondary teachers in addition to the 857 volunteer teachers( engaged during the past administration) who were recently regularised as permanent staff. Of great emphasis is the fact that Ugwuanyi’sadministration has in the last four years equitably distributed developmental projects and appointments across the state in spirit of unity, equity and fairness to the admiration and happiness of all and sundry in the state. This is a clear departure from the practice in the past that created bad blood among political stakeholders in three senatorial zones in the state.Ugwuanyi has not only continued to maintain the infrastructure he met on ground, he has built new ones, completed and still completing the abandoned ones across the state.

After many decades without any national or international trophy in its kit, the state-owned Rangers International Club with the massive support of Ugwuanyi’s administration in the last four years had won the 2015/2016 Nigeria Professional Football League and the 2018 Federation Cup. Notwithstanding that his administration inherited backlog of salary of workers and arrears of pensioners, Ugwuanyi never engaged in buckpassing or blame game for one day. His government boldly took the bull by the horn by clearing the outstanding salaries, promotion and introduced prompt payment of workers. Since then, workers in the state receive their salaries every 23rd of the month and 13 month in December as bonus. That is the first of its kind in any state in Southeast zone. This is despite the fact that Enugu State is not oil producing state and is almost at the bottom in the cadre of monthly Federation allocation. This made the national leadership of Nigeria Labour Congress (NLC) and workers in the state to confer on him the award of Most Workers Friendly Governor in Nigeria. Also being gradually addressed by Ugwuanyi’s administration is the arrears of pensioners that have piled up for years due to failure of the past governments to clear it.

In the last four years of Ugwuanyi’s administration, Enugu State has recorded the lowest crime rate. This milestone which brought about the peacefulness of the state was attested to by the leadership of Police Service Commission. This was responsible for the prevailing peace in the state, before, during and after 2019 elections.

The overwhelming support Ugwuanyi’s administration enjoyed in the state in the last four years and his resounding victory in his reelection is a clear testimony of his outstanding performance in office and style of leadership that give everyone,irrespective of religion, tribe, status and party affiliation sense of belonging in the affairs of the state. That is why from Enugu West, East to North, among the artisans, Christians, Muslims,workers, youths, adults, residents, visitors, religious leaders, oppositions and others in Enugu and beyond, Ugwuanyi is a unique exemplar in leadership. He is a performing, peaceful,responsible and responsive leader any day, anytime. He remains the most available and accessible governor by the people in Nigeria today. He is not only always in the State, he is always handy and live up to his responsibilities as governor.

It is for this reason and others that Ugwuanyi’s chieftancytitle, Gburugburu has become a brand, movement and household name in Enugu State today. His style of politics is emulative and tolerant. Unlike other political leaders, Ugwuanyi has in the last four years used power as shield to protect and unite the people, instead of the usual sword, political office holders normally use power as to divide and oppress the people, especially perceived enemies. This and many other feats and giant strides of Ugwuanyi’s administration endeared him and his government to the hearts of Enugu people and made his first term in office peaceful, developmental, progressive and eventful.

Critically dissecting Ugwuanyi’s first term in office, there is no doubt that his administration has excellently and committedlyimplemented his government’s four-point agenda for the betterment of the people, he has gone extra miles to stabilise the politics of the state and stimulate its economy with sound economic policies and implementations.

As Ugwuanyi takes oath of office for second term tomorrow, expectations and hope are high among the people, especially in the light of the positive actions, steps and decisions hisadministration has taken since he was reelected. There are clear indications that with the massive support of the people, availability of fund and God’s guidance, Ugwuanyi’s second term in office will be more inclusive, developmental and uniting than his first term. He will consolidate on his first term’s remarkable achievements, expand the frontiers of good governance and takes the state to enviable heights. And Surely, Enugu State will continually remain in the hands of God.