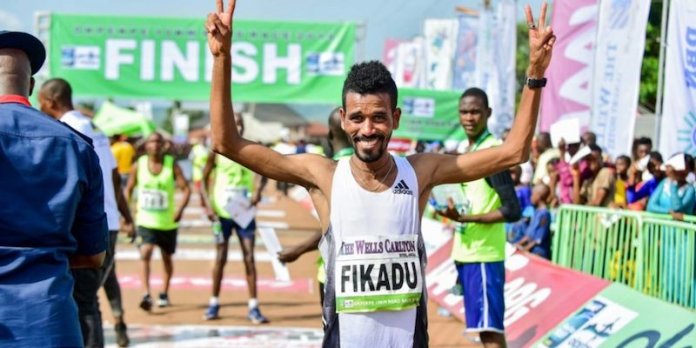 In what points to a departure from East African domination of the annual Okpekpe 10km Road Race in Benin City, this year’s edition saw a Bahraini, Fikadu Dawit, winning the male category with a time of 29.03 minutes.

Dawit beat two East Africans, Barechanu Tsegu and John Lotiang, of Ethiopia and Kenya who finished in a time of 29:04 and 29:17 minutes respectively.

However, the East Africans completed a clean sweep of the female category.

Sheila Chalangat from Kenya took the first position with a time of 33:14 minutes, while Tuitoak Jepchirchir also of Kenya and Kasegn Asefa of Ethiopia, returned with a time of 33:18 and 33:31 to emerge second and third respectively.

Edo State Deputy Governor, Philip Shaibu, and Secretary to the State Government, Osarodion Ogie, ran alongside other government officials as well as other stalwarts of the All Progressives Congress in the state in the VIP category.

While the first VP race that included the deputy governor took off at 8:45, that of the APC race, with the party’s national chairman Adams Oshiomhole participating, took off at 9:30.

Delivering an address, Oshiomhole, a former governor of the state, thanked the current governor, Mr. Godwin Obaseki, and the organisers of the Okpekpe 10 km road race for sustaining a tradition that has lasted seven years.

Oshiomhole said what the people of the community need is neither tears nor sympathy but what would impact on their lives positively.

The former governor further enjoined indigenes of Okpekpe to take advantage of the race to engage in exercise as it is cheaper than drugs.

Also, the Minister of Youths and Sports Development, Solomon Dalung, commended Oshiomhole for translating his dream into reality.

Dalung said the presidency is happy that the Okpekpe road race has come to stay, noting that in no distant time, the community will play host to the world.

He further noted that this year’s event has met the international standards.

On his part, Governor Godwin Obaseki whose welcome address was delivered by the Secretary to the Edo State Government (SSG), Osarodion Ogie Esq., said the state will always provide the needed facilities for the yearly event to thrive.

He said the dream of seven years ago was the dream of one man, Comrade Adams Oshiomhole, to the extent that “today, we have athletes who come here to compete in the event,” adding that his government will sustain the race.

However, the crisis rocking the Edo chapter of the All Progressives Congress (APC), took the shine off the biggest annual athletic event in Nigeria.

The event was devoid of the usual glamour, especially in the VIP race. This forced Oshiomhole to run alone in another VIP category tagged: “APC category race”, apparently created so that the political actors in Edo State can avoid each other.