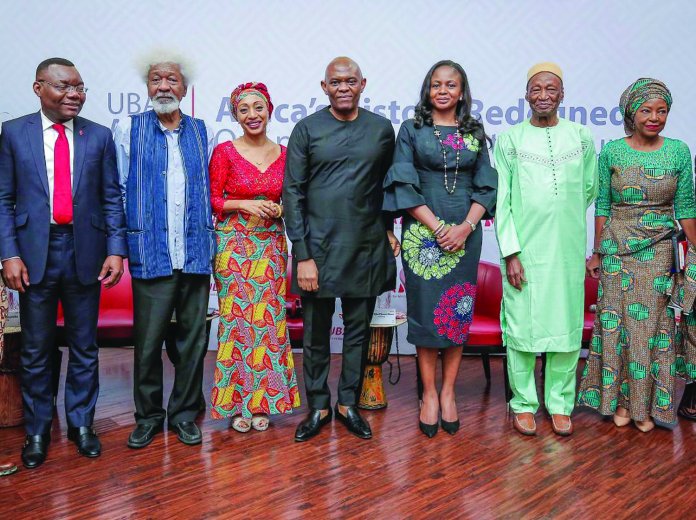 In commemoration of Africa Day, which is being marked across the world today, the United Bank for Africa recently hosted a panel session probing why history is key to the continent’s revival, writes Solomon Elusoji

Dressed in a simple but sleek, dark collarless shirt and trouser made out of African garment, Tony Elumelu, Group Chairman of the United Bank for Africa, was seated right in the middle of the panelists. To his right was Nobel Laureate, Wole Soyinka (“I am seated beside money,” the literary giant, would later quip) and Ghanaian politician, Samia Nkrumah (daughter of the legendary Kwame Nkrumah). To Elumelu’s left was one of Africa’s most accomplished history professors, Djibril Tamsir Niane and globally-famous musician, Femi Kuti. The amphitheatre was chilling, but as the panelists began to talk, prodded on by civil society professional, Ayo Obe, the cold coagulated and settled quietly, like a ball at rest.

“We understand the past,” Elumelu said, speaking to the reason why UBA had convened the panel session, which held recently at its Marina headquarters in Lagos. “We understand the need for African unity” because “we are a symbol for the economic empowerment for Africans.”

The panel, titled ‘Africa’s History Redefined, Our Past, the Path to the Future ’was part of activities set up by UBA to celebrate Africa Day, an annual commemoration of the foundation of the Organisation of African Unity celebrated in various countries on the African continent, as well as around the world.

Elumelu noted that UBA’s identity (the financial institution has presence in 20 African countries) cannot be separated from Africa and, indeed, Africa Day. “It presents us the opportunity to remind ourselves, the world and indeed Africa that we owe ourselves the duty of making Africa the continent of our dreams,” he said.

This remembrance, of course, is tied to history, which has been largely written and moulded , for Africa, by white Europeans and their imperial ambitions. In 1964, UNESCO launched the General History of Africa, a series of heavily researched volumes designed to remedy the general ignorance on Africa’s history; Soyinka, who was on the UBA panel, was part of the African scholars who worked on the UNESCO project. But, despite valiant efforts such as UNESCO’s and the democratisation of information by the internet, African history and the bastion of heroic stories it contains have remained a footnote in the world’s memory, even among Africans.

But this shouldn’t be so, Elumelu noted. “Our past provides a veritable tool to fashioning the continent’s development, renaissance and economic growth,” he said.

Speaking strongly on the issue, Soyinka, who commended UBA’s initiative for opening up discussions on these pressing topics decried the growing erosion of history from the curriculum in African schools. He noted that those who do not understand their past inadvertently truncate the future of their children.

“Those who expunge history from our schools decide to be taken out of history altogether,” he said. “You can imagine my shock some years ago when I discovered that history had been taken out of our (Nigeria’s) curriculum. I couldn’t believe it. A lot of crime is being done to our children. It is unconscionable that we allow these things to go on for so long. So our children grow up intellectually truncated.

“How can we cope with the modern phenomenon if we do not know the past? We should never forget the importance of history as it is not just an academic exercise.”

Corroborating Soyinka’s position, Professor Niane opined that reminiscing about Africa’s rich history is important as there is no people without history.

“A lot of work has been done by Africans and we have to be happy about it,” he said. “There is the need to continue the conversation about African unity. Policies have been put in place and our democracy can only get stronger. Peace will reign and Africa will be reunited. Economic transformation is also important but it is not the only thing we should concentrate on.”

Nkrumah, who has been described as the new Mandela by the Huffington Post, noted that it is important that Africans begin to orientate one another. “We need to understand where we came from,” she said. “An African centred education is what will give us the courage to make the changes we need to make.”

Femi Kuti also emphasised the value of history. “History is most important,” he said. “Our children need to learn this history so that they can come up and build the continent. We need everyone – both boys and girls to work towards this vision.”

As the conversations rolled to an end and the audience got opportunities to ask questions and make comments, Soyinka told Elumelu he has to support the arts and creative industry, an industry constantly engaged with the reverberations of history. Elumelu informed him about the Tony Elumelu Entrepreneurship Programme, which funds several creative businesses.

Also, UBA, in a statement released after the panel session, said it will “continue conversations around these important topics that are required to galvanise the African economy with the aim of attracting the much-needed support that will boost SMEs and support business growth on the continent.”