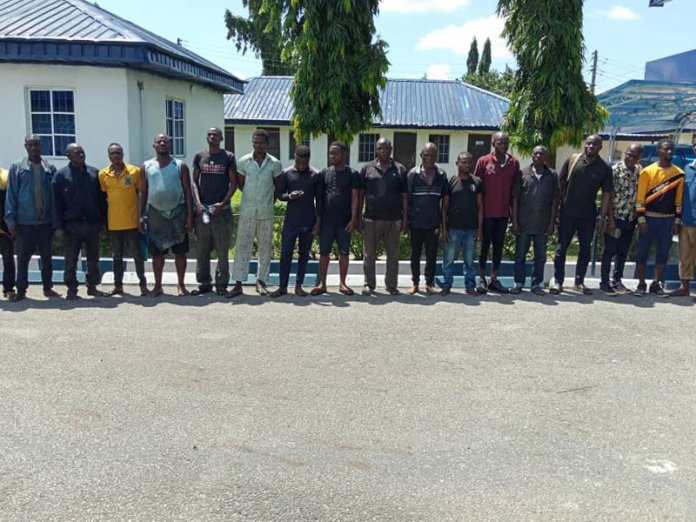 The Nigerian Navy has once again handed over 22 suspects and two sea-going vessels to the officials of the Economic and Financial Crimes Commission (EFCC) for urgent prosecution in its renewed efforts to clear the Niger Delta region of illegal bunkering and maritime criminality.

Also handed over to the anti-graft agency was a wooden boat, containing approximately 240,000 litres of product, suspected to be illegally refined diesel.

The handing over ceremony was held at the Nigerian Navy Ship (NNS) Delta at the Naval Base in Warri, Delta State.

Addressing journalists before officially releasing the arrested suspects and other seized items to EFCC officials, the Commander of the NNS Delta, Commodore Ibrahim Dewu, warned those still engaged in the illegal business within the area of operation of his command to desist with immediate effect.

Dewu boasted that the NN was poised to get the Nigerian maritime environment effectively covered so that there would be no escape route to criminals and those who are bent of depleting the nation’s oil revenue.

He stated that the vessels, wooden boat, the product and the arrested crew members were all nabbed offshore Escravos River, engaged in transfer of the illicitly acquired product on Sunday, May 18, 2019.

“In a bid to secure and sanitise the area of operation of NNS Delta, on May 19, 2019, at 0130 hours, NNS Delta patrol team arrested SD Waterman, MV NIPAL and two large wooden boats, offshore Escravos, carrying out illegal transfer of products. At the point of arrest, about 22 crew members were brought in after the arrest.

“While bringing in the arrested vessels from Escravos, one of the large wooden boats was seriously taking in water and in the process went aground and sank. Efforts are ongoing to salvage the vessel. Some of the drums and products were recovered and brought back to NNS Delta.

“In view of this, we carried out our preliminary investigations and found the arrested vessels and crew members culpable of committing economic crime. In that regard, we decided to invite in the EFCC to take to take over the case for further investigation and possible prosecution.

“The product onboard is suspected to be illegally refined AGO. At the point of arrest, one of the Cotonou boats, which was arrested beside MV NIPAL had about 150,000 litres, the vessel and the boat were arrested in the process of starting the ship-to-ship transfer, while SD Waterman had already taken some of the products from another Cotonou boat, which was secured alongside the vessel.

“There is about 80,000 litres in the boat beside SD Waterman, while about 10,000 litres had already been transferred into the vessel (SD Waterman).

“Let me use this opportunity also to warn and advise all individuals or persons involved in this nefarious act to desist from it because the Navy will not stop from doing everything possible to sanitise our maritime domains”, he warned.

Speaking on behalf of the EFCC team, a Principal Detective Superintendent of the commission from the Benin Zonal office, Mr. Richard Ogberaga, said investigation had already commenced into the circumstances surrounding the vessels, their crew members and the product found on them.

“We have just taken over the vessels. There are two vessels; MV NIPAL and SD Waterman, with one Cotonou boat. We are also aware that there are 22 suspects, whom we have just taken over. We have already commenced investigation by telling officials of DPR here, they are starting with the sounding of the vessels to determine the quantity of product in them. We are also looking at quality; samples will be taken and quality analysis will be done

“We are going to interview the suspects and find out the extent of their involvement and how they came about this product. We will brief you subsequently of developments as the investigation continues”, he said