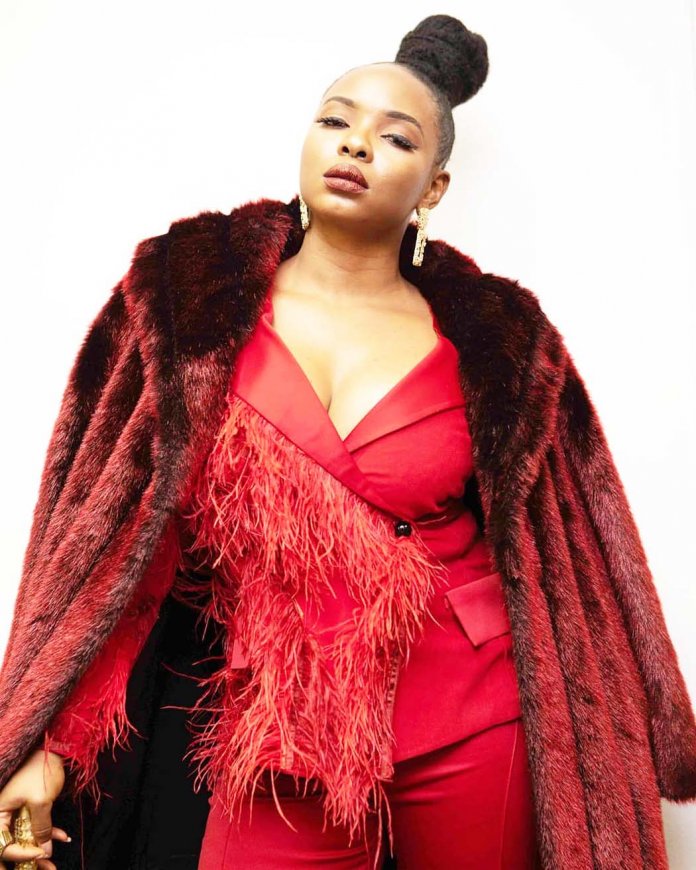 With three highly-rated studio albums and an EP to her credit, Nigerian Afro-pop artiste, Yemi Alade is getting ready to release her new body of work titled ‘Woman of Steel’. Just fresh off the release of ‘Oh My Gosh’ remix, featuring American rapper, Rick Ross, this fourth studio album and the fifth project by the ‘Igbo-Yoruba girl’ is coming five years after the release of her debut record in 2014.

To up the anticipation of the hotly awaited musical project, she posted a red stimulating picture of herself, posing boldly in two piece red suit, while she radiates confidence in her top-notch fur jacket exposing her cleavage. Yemi had barely two months back dropped her hot single, ‘Yaji’, which she featured Slim Case and Brainee.

The ‘Woman of Steel’ project follows her 2017 album, Black Magic. The Jonny crooner had early in the week taken to her Instagram account with the following message, “#WOMANOFSTEEL album out soon #yemialade” to excite her fans. The Effyzzie Music Group diva has been posting the hashtag #WOS on her social media for months, and now reveled stands for “Woman of Steel”.

Though there isn’t a hint to the number of tracks to be in ‘WOS’, The Rick Ross aided “Oh My Gosh” is the only confirmed track on the set, and may also include ‘Yaji’. Woman of Steel, as Alade’s fifth body of work, comes after Black Magic, Mama Africa, King of Queens and an extended play titled Mama Afrique.

As with her other albums which are not without collaborations, the singer/writer, according to reports, joined forces with versatile super-acts like legendary Grammy Award winner Angelique Kidjo, Duncan Mighty and popular Nollywood star Funke Akindele on her upcoming album which is projected to have major hits.

Expectedly, the ‘King of Queens’ of Nigerian music, working with “The Undisputed Queen of African music”, Kidjo, should draw out a song good enough to be great for her much anticipated album and crest her imprint on the record of African songs. Kidjo is a Beninese singer-songwriter, actress, and activist who is noted for her diverse musical influences and creative music videos

Funke Akindele as a singer, might just see the Nigerian actor on just a skit in the Woman of Steel work. On the part of Duncan Mighty on the album, the musician and music producer and his musical style known to demonstrate high-level of genre versatility and heavily influenced by the sounds and culture of his native Ikwerre dialect of Igbo language, might just see Yemi tapping from it.

In 2014, Yemi dropped her debut 17 tracks album ‘King of Queens’ which had collaborations from seasoned musicians and sound engineers who doctored the musical work to taste.

In King of Queens, Alade worked with producers such as Selebobo, Sizzle Pro, Philkeyz, Young D, GospelOnDeBeatz, OJB Jezreel, Fliptyce, and Beat Nation. The album was preceded by three singles: “Johnny”, “Tangerine” and “Kissing”. It featured guest appearances and skits from Bovi, R2Bees, Phyno, Chidinma. The deluxe edition of King of Queens followed and contained French versions (with Fally Ipupa) of songs originally performed in English.

She followed up her debut King of Queens with another acclaimed studio effort, Mama Africa in 2016, which met mixed reactions from fans and critics.

Yemi attempted to correct the flaws of ‘Mama Africa’ in ‘Mama Afrique’ EP, before releasing the 63-minute long 2017 project ‘Black Magic’, which served as her third studio album. Alade’s second studio album Mama Africa was supported by six singles: Na Gode, Do As I Do, Ferrari, Kom Kom, Africa and Tumbum.

The deluxe edition of the album also followed and featured guest vocals from South African musicians Bucie and AKA.