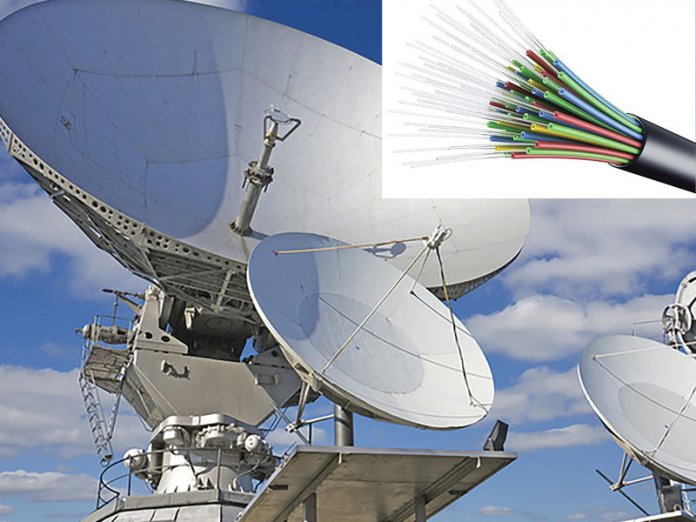 The incursion of satellite technology in global telecommunications business is on the rise, even though Nigeria and some other African countries still believe in fibre optic technology for efficiency and low cost delivery, writes Emma Okonji

There are several communications satellites in earth’s orbit, used by both private and government organisations. Many are in geostationary orbit, about 35,700 km above the equator, so that the satellite appears stationary at the same point in the sky.
But the fibre optic cable is connected from the submarine cable en-route Europe to most of the African countries and laid underneath the earth surface, covering a long distance area, before connecting it to homes and offices for internet access. In spite of the differences in the operations of the satellite technology and the fibre optic cable technology, both technologies complement each other and offer internet connectivity at high speed.

The high frequency radio waves used for telecommunications links travel by line of sight and so are obstructed by the curve of the earth. The purpose of communications satellites is to relay the signal around the curve of the earth, allowing communication between widely separated geographical points. Communications satellites use a wide range of radio and microwave frequencies.
To avoid signal interference, international organisations like the International Telecommunications Union (ITU), have regulations on the frequency bands that certain organisations are allowed to use. This allocation of band minimises the risk of signal interference.

Differentiating factors
Satellite communication is best suited for rough terrains, poorly connected areas and places where it is difficult to lay fibre optic cables. On the other hand, fibre optic cables are suited for urban areas with good infrastructure, where it is convenient to lay communication lines.
In the area of bandwidth, fibre optic promises extremely higher bandwidth with negligible electromagnetic interference, but satellites have lesser bandwidth and are prone to interferences. The data rates in fibre optics are high with minimal propagation delays.
Data rates in satellite communications are much lower. The large distance from the earth to the satellites introduces inadvertent delays in transfer.

In the area of broadcasting, satellites are inherently designed for broadcasting. Messages sent by a satellite can be received by thousands of ground stations simultaneously, but broadcasting by fibre optic cables consumes a lot of bandwidth.
In the aspect of mobility, fibre optics is immobile by design and their usage is limited within fixed locations, but the satellite communication facilitates mobile communications. For reliability, it has been proven that communication using fibre optics is more reliable than satellites and is less prone to errors.
But the cost of fibre cable depends upon distance between the links and number of points. The cost of satellites is independent of distance between the stations, which means that the cost will be same for 5km and 5000km. So the satellites have higher recurring costs than fibres.

Expert view
Speaking about innovation in satellite technology, the Executive Director in charge of Africa, Middle East and Asia at Yahsat, a satellite company, Mr. Boyd Chislett, said Yahsat uses the K band instead of the C and KU bands in offering its satellite services, adding that the choice for K band has more to do with the speed of internet services that the company offers its customers.
“For us, the K band operates at high speed internet connectivity, with low power consumption, and the technology allows us to deliver our technology solutions to the customer that needs speed in his or her operations. It enables us to provide cost-effective solution to the customers. On top of that, all the equipment that we use are low power consumption equipment, which allow us to deliver services to our customers on the back of effective technology that will enhance customer experience,” Chislett said.
Broadband in the traditional sense of it, he said, had always focused on Long Term Evolution (LTE) technology, through the deployment of fibre, WiMAX and other top solutions. He, however, explained that broadband has a meaningful role to play in internet connectivity and that Yahsat satellite services complement it.

Emerging trends and safety
Addressing emerging trends in satellite technology and the next generation of satellite, the Consultant, European Aviation Network (EAN) Regulatory at Inmarsat, Julián Seseña, and the Manager, EAN Regulatory, Inmarsat, Matt Evans, explained that Inmarsat, a satellite company, had been leading innovation in the mobile satellite communications sector ever since its inception by the International Maritime Organisation (IMO), in 1979, with the objective of delivering the world’s first satellite communications network dedicated to maritime safety.

Inmarsat, according to them, was the first satellite operator to meet the stringent requirements of the Global Maritime Distress and Safety System (GMDSS), and subsequently the International Civil Aviation Organization (ICAO) for global aeronautical safety communications. They added that as at today, Inmarsat satellite communication networks and services are not only saving lives but empowering people and communities, enabling business and trade, serving governments and supporting remote humanitarian work throughout the world.

“Our wide range of solutions help deliver mission-critical connectivity to our customers, ranging from governments and aid agencies to ship owners and airlines, beyond the reach of fibre optic networks. More than 90 per cent of the world’s aircraft crossing oceans use our safety and operational services for communication and surveillance today,” they said in a recent statement.
Most of the world’s leading airlines have used Inmarsat Classic Aero services for over 25 years, as well as small, medium and large business jet owners, general aviation and government agencies.

Inmarsat’s SwiftBroadband Safety (SB-S) service is the next generation of operations and safety connectivity, delivering game-changing visibility into airline operations. These services are provided by a fleet of Inmarsat satellites, which covers the world using spectrum in the L-band.

“With European air traffic forecast to double over the next decade, the European Aviation Network (EAN) is designed to grow capacity to match accelerating demand. Initially combining Inmarsat’s multi-beam S-band satellite with nearly 300 ground towers implemented by Deutsche Telekom, it is easily and cost-effectively scalable,” the statement added.

While successful compatibility conditions have been derived for operation of EAN and other international mobile telecommunication (IMT) adjacent band users, and considering the experience of sharing EAN with other terrestrial services operation co-frequency, there is a crucial need for international regulation to ensure adequate safeguards to avoid interference from IMT systems operating in the same band. In this regard, World Radio Conference 2019 (WRC-19), an initiative of the International Telecoms Union (ITU), has addressed the issue of regulation.

According to ITU, the global telecoms regulatory body, the scenario of potential interference from terrestrial IMT base stations to satellite space stations, the studies and Inmarsat’s own operating experience, have shown that deployment of terrestrial IMT systems with certain configurations could cause extremely high levels of interference to MSS satellites.

ITU, in one of its recently commissioned studies on satellite technology deployment and regulatory implications, said the ITU–R studies have identified that the most effective means to avoid interference to MSS satellite receivers is to ensure that the band 1980–2010 MHz, if used for terrestrial IMT systems, is used for uplinks only, which is from transmitting mobile user terminal to base station receiver.
Potential revisions to the Radio Regulations (RR) should be developed to protect interference free operation of MSS satellite, avoiding simultaneous and independent use by other IMT base station transmitters, or limiting the emissions from IMT base stations in the uplink band, ITU said.

Lagos Orders Civil Servants Below Grade Level 15 to Work from Home till Feb. 1