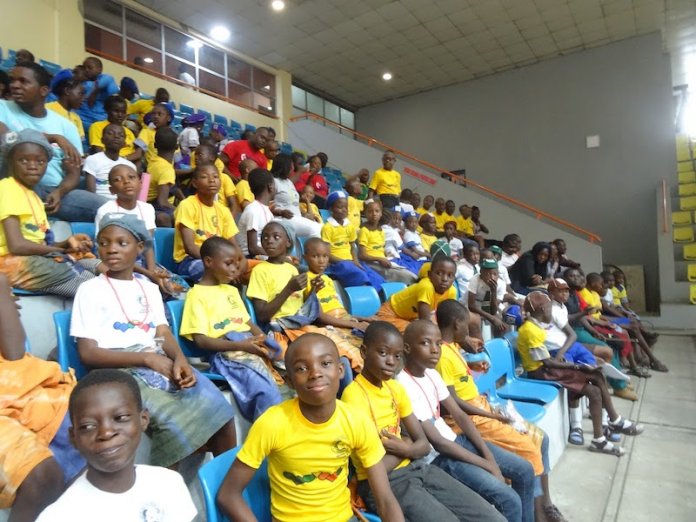 Touched by the need to rescue children being used as prostitutes, the Iyaniwura Children Care Foundation has expressed its disappointment at the Lagos chapter of the Nigerian Labour Congress for allowing the Owutu Diamond Women Initiative, a prostitute group, which had some children as its members to march during the May Day rally. The foundation is drawing a battle line with the labour body. Funmi Ogundare reports

On May 1, a day set aside to commemorate the International Workers’ Day, the Owutu Diamond Women Initiative, a prostitute group, which has some young adults among its members, were among those who filed out alongside other labour groups.
At the rally held at Agege Stadium, Lagos, the group carried a banner with the inscription, ‘Sex Workers Need Rights, Not Rescue’, to demand for their rights.

Not done, the convener posted on social media that ‘Today is May Day, ‘Workers’ Day’, in Lagos State, the first time participating in May Day march. The sex workers were demanding their rights and not rescue, they demand that they be treated like others regarding sex work as work’

Disappointed by this show of shame, the Founder of Iyaniwura Children Care Foundation (ICCF), Mrs. Jumoke Otitoloju told THISDAY that using children to get involved in the illegal trade is demoralising, while blaming the Nigerian Labour Congress (NLC), Lagos chapter for allowing the group to participate in the match past.

According to her, “we are already saddled with the issue of child sexual abuse every day, but when we portray sex as work; our children are going to bear the brunt because they will just be hiding them in brothels.

“We have a lot of brothels that harbour children who are brought from the villages to work as sex workers. It is really annoying that NLC will have that boldness to tell us that they are fighting for Nigerian workers and want sex to be part of a trade where children will work when they finish from school.”

Otitoloju said her foundation is still carrying out investigations to know where the children are and see how it can rescue them. “They are agitating that they don’t want to be rescued, but we want to tell them that these children are innocent, they do not know what they are doing. Prostitution is dehumanising, sex is a mutual activity between two people, but when children are forced to have sex with seven or eight men a day, it is no fun anymore.

“If you have a one-on-one with any prostitute, they will tell you that prostitution is not a trade. It is either they went into it out of frustration or depression or ignorance. So for someone to say it should be legalised as a trade is appalling. Some people will tell you they are fighting for human rights; does it mean that you have to infringe your right on other people?

“Rather than do that, I will prefer that they propagate polygamy. If you think you are a man and cannot hold on to one woman, you can marry as many as you can,” the founder stressed, adding that most organisations propagating sex to be a trade get funding from international organisations.

“Now they are saying that aside your one man, one wife, you can start practicing prostitution. We cannot tolerate that. We will stand against it. It is like kidnapping and robbery. We will stand against it. We don’t support prostitution to be a trade, rather I will allow polygamy.
Otitoloju expressed disappointed that NLC, which stands as a body for Nigerian workers, would allow the group to match with them.

“It is a disgrace! It is also a disgrace to those of us who went to the university. I am so proud that I can match on Workers Day, but when I saw what the NGO posted on social media, my mind blew off. It is a shame. Because we are humans, does it mean we don’t have our morals! There are rules and regulations guiding different countries and prostitution. No child should be used as a prostitute. NLC has the list of legalised trades in Nigeria which they can fight as a body for and prostitution should not even be among them. Now they are fighting for prostitution to be a right.”

The founder, who said ICCF gives holistic care to children from a day old to 17 years, in terms of health and education, security, development and preventing them from child abuse said, “NLC will meet us there because NGOs working with children will not allow that from them, neither are we going to allow them to legalise sex or prostitution as a trade. We will stand and kick against it.

“Our children are not safe because every day you hear cases of child abuse. Legalising prostitution will make children go into depression the more. If you ask children who go into prostitution, they will tell you they don’t know what they are doing. When NGOs are trying to rescue, empower and reintegrate them into the society so that they can go to school and seek better jobs in future, some people are saying they will legalise prostitution. What they have done is unlawful and criminal. I didn’t expect that from NLC.”
For children that are rescued from the illegal trade, Otitoloju said her foundation works hand in hand with the Ministry of Youths and Social Development.

“There is a brutal cartel that hides children in brothels, but when we get information, we move very fast. We call in the police and child protection agencies, which we are a member. The children gotten from the brothels are being rehabilitated.

“We have a home for them in Ipaja Ayobo established with the aim of reintegrating them into the society. Some are also taken back to their parents if they can actually tell us where they are, but most times, they have lost contact with their families.

“In terms of education, we have also supported schools, through the Lagos State Universal Basic Education Board (SUBEB) and in terms of community care, I work with local governments and I get their support too. So anything that has to do with children so that they can have the best, ICCF is ready.”

In a telephone interview, the Chairperson of NLC Lagos State chapter, Mrs. Funmi Sessi told THISDAY that the union was embarrassed that the sex workers were able to find their way in to march with other workers’ group, adding that they are neither affiliated to the NLC nor Trade Union Congress (TUC).

“While we were waiting with the representatives of the governor on the podium that day, we saw the group coming, an official reliably informed me about them asking me how they were invited. They claimed that they are an affiliate of NLC. But they are neither our affiliate nor Trade Union Congress (TUC), so they are not supposed to come up at all. What they have done is a criminal offense.

“The security personnel were supposed to challenge and stop them at the entrance on seeing their banner and the clothes they wore bearing the inscription that they are sex workers.”

She said by the time the workers were set to march, there was nothing they could do to stop them. “The only thing that could have been done was for the security details not to allow them. We wondered why and how they were able to come in. It was an embarrassment for us. We didn’t like it.”

According to THSDAY’s investigation, the sex workers had defied any untoward reaction or showed any form of fear that they might be arrested while trying to press for their demands during the match past on May Day.

The convener of the Owutu Diamond Women Initiative, Mrs. Margaret Onah confirmed to THISDAY that her group belongs to the civil society organisation and that it sent a letter to NLC, but didn’t get any response from the body.

“NLC accepted our letter, but didn’t give us a reply. We were on our right like every other person and we decided to join them to march on May Day,” she said.