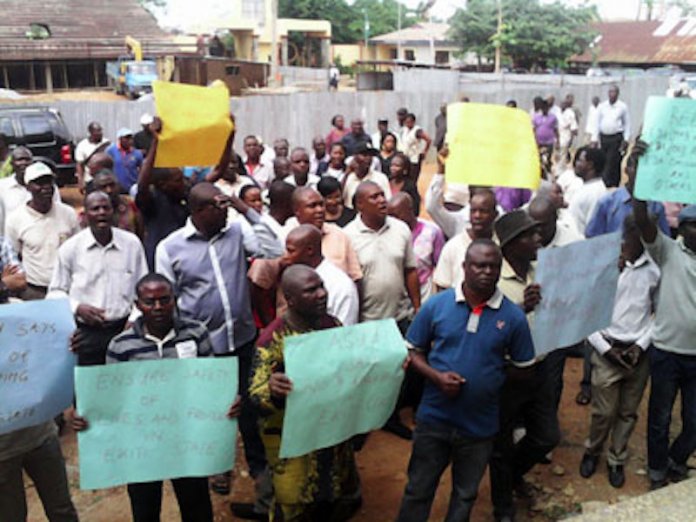 Workers of Ekiti State University, Ado-Ekiti (EKSU) yesterday stormed the university to protest against the management of the institution over non-remittance of their deductions from their 11 month salary to cooperative societies.

The protesters cut across academic and nonacademic staff members, who were members of various cooperative societies on the campus.

They moved from the institution administrative block at about 8:10 a.m. and proceeded to the campus gate to express their grievances

They displayed placards of various inscriptions like ‘Enough is Enough’; ‘Pay our 11 months’ salary’; ‘No more half salaries’; ‘Our members are dying’; ‘Help! Help! Save Our Soul EKSU is killing us’; ‘O to ge, pay our outstanding salary’, among others

Speaking with journalists on the issue, the President of Academic Staff Union of University (ASUU) cooperative society, Prof. Awe Ariyo, alleged that a deduction gulping up to N1.8 billion was not remitted to the cooperative societies’ account, making it difficult to access the loan.

He said non-payment of the deducted cooperative money had put the workers in shame as many of them who depend on it have had to deny themselves some basic necessities of life when they could not meet financial obligations.

Ariyo said: “They have turned us to paupers. And all our colleagues who are not in the cooperative collect full salary. Is it a sin to be frugal and set something aside to build a house, pay children school fees and buy a car?

“The problem we are having is that they are pretending to the government that pays full salary.

“Government gives them N260 million subventions whereas the wage bill is over N500 million. Instead of giving the true picture of how the wage bill rose to that level, they are pretending as if they are paying full salary.

“The Governing Council has decided to have a meeting with us but if the proposal is not acceptable, we would move en masse to the state Government House to express our grievances.”

Also speaking, the Secretary of the Senior Staff Association of Nigeria Universities, Mr. Aguda Azeez, noted that the workers are unbearably suffering while the management is enriching their members’ pockets unfettered.

Azeez said the institution Governing Council under the chairmanship of Prof. Bamitale Omole has derailed from its responsibility in ensuring effectiveness and efficiency in the university’s administration.