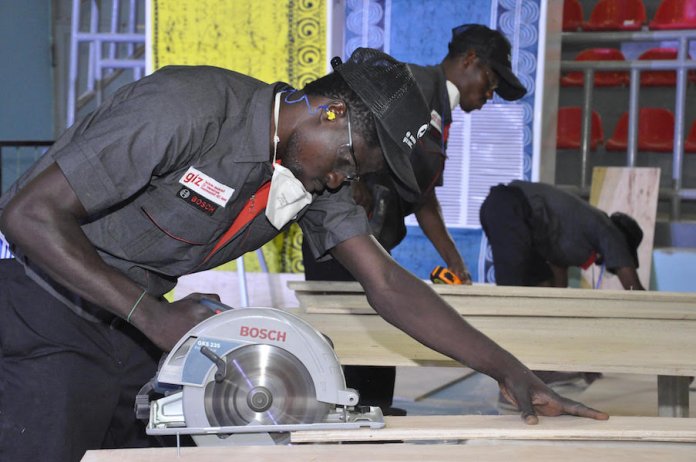 Ojo Maduekwe writes on how a leading global supplier of technology and services, Bosch Nigeria, has partnered iCreate Festival to organise training on various vocational skills for the young and talented who are aged between 18 to 28

A typical conversation on skills acquisition normally centres around the numerous empowerment programmes that has long been a fad for the three tiers of governments and their agencies, so much so that people consider public agencies as the main drivers of skills acquisition in Nigeria.

It doesn’t help that almost every new government that assumes power sets up skills acquisition centres as part of their agenda to tackle unemployment and youth restiveness. However, there are some private sector organisations that also invest in human capacity building through this means.

Leading global supplier of technology and services, Bosch Nigeria, has partnered the organisers of the iCreate Festival in an event that has been tagged ‘Africa’s Olympics of Skills’. Open to the young and skilled aged between 18 to 28, the iCreate Festival seeks to create awareness to various vocational skills training such as carpentry, automobile mechanics, solar or electrical installations, welding and fabrication, garment making industry, shoe and leatherworks, art, app development, graphic and web design, robotics and cooking, to name a few.

Bosch Nigeria will be focused on the construction segment of the 2019 festival where its Power Tools will be the preferred tools used by the competitors in the participating segments. Additionally, Bosch will be supporting with technical expertise and training, focusing on safety.

The festival is in three stages, starting with the Regional Technical and Vocational Skills competitions in Kaduna, which already held on April 26 and 27, to be followed by another regional competition in Enugu from July 19 to 20. The finals will take place in Lagos on December 4 and 5. All three events will feature exhibitions, entertainment and panel discussions around youth empowerment, and Bosch intends to participate in the entire event.

In a press release sent to THISDAY, “@The skill competition is an innovative strategy to curb the high youth unemployment, promote skill excellence and prepare youths for jobs of the future. By directing attention on vocational skills, iCreate Africa is addressing the societal perspective affecting the acceptance of technical skill trades while upgrading the value of skilled professions,” according to the organisers of the festival.

During last year’s event, 45 winners from 14 skill trades received cash prizes, equipment, endorsement deals from brands, internship and job placements, training and mentoring. The 14 Gold medallists were crowned as iCreate Skill Champions is representing each skill-trade and are billed to attend the 2019 World Skills Competition in Kazan, Russia in August.

Bosch is an arvid promoter of young, skilled and talented people, especially in Africa where it operates in 13 countries within the continent. As part of its Corporate Social Responsibility, the company is part of a group of about 20 companies offering scholarships to African junior executives that allows them spend a year in Germany completing a professional training programme. The initiative is called ‘Afrika Kommt!’ and Bosch has been involved since 2008 with more than 123 young Africans haven benefited so far.

In 2015, Bosch in South Africa invested in an outreach robotics program that provided the opportunity for children from various backgrounds to study Robotics, resulting in two teams qualifying and competing in the 2016 World Robotics Olympiad. Since then, Bosch continues to foster the program in bringing robotics to scholars in outreach communities.

Judging by the opinion of experts on the importance of skills acquisition as an effective means to tackle both unemployment and youth restiveness, one can understand the renewed interest in the topic by not just the public sector but also private organisations. The successes recorded by notable public agencies such as the Niger Delta Development Commission (NDDC) and Industrial Training Fund (ITF) have made the subject interesting.

Other empowerment interventions past and present that have made indelible mark and become popular overtime with Nigerians are the National Directorate of Employment (NDE), National Poverty Eradication Programme (NAPEP), Small and Medium Enterprises Development Agencies (SMEDAN), Subsidy Reinvestment and Empowerment Programme (SURE-P), Youth Enterprise with Innovation in Nigeria (YOUWIN) and N-Power.

In just two years, over 450,000 Nigerian youths have been empowered by the ITF in skills training, with the aim of making them self-reliant, according to Nigeria’s Vice President, Yemi Osinbajo, who was speaking at a recent graduation ceremony of over 11,000 Nigerian youths from the National Industrial Skills Development Programme (NISDP) of the ITF.

Trained in welding and fabrication, plumbing and pipefitting, tailoring, aluminium, tilling, Plaster of Paris (POP) as well as photography, according to the ITF Director General, Joseph Hari, start-up kits were given the youths to complement their training. “Our monitoring and evaluation template indicates that where training occurs without the accompanying empowerment tools, the results become less impactful,” he said.

In 2018, aside Bosch, other partners for the iCreate Festival included such notable brands like the ITF, GIZ, Sterling Bank Plc, Julius Berger Nig. Ltd, Mafita UKAid, the German Embassy Abuja, and Trace. There were also others that played very strategic roles as major sponsors of the festival.

Aside the ITF, the NDDC is also doing a good job with its involvement in skills acquisitions, especially with the segment of the population it’s affecting. Towards the end of the first quarter of this year, the NDDC trained persons living with disabilities in Edo state. The two weeks skills acquisition training was aimed at reducing poverty among Nigeria’s physically challenged.

According to the state chairman of the Joint National Assembly of Persons With Disabilities (JONAPWD), Henry Ebose, “For the past two weeks, we have learnt different skills that most of us did not know before now and we have gathered adequate knowledge to enable us earn a living. We commend the NDDC for the initiative aimed eradicating poverty among the physically challenged persons in Edo State,” Ebose said.

With a youth unemployment rate of 55.4 per cent as at Q3 of 2018, Nigeria is in dire need of effective skills acquisition programmes to bridge the unemployment gap, and curb young Nigerians involvement in crime. This is where ideas like iCreate Festival comes in, and also the fundamental reason why Bosch chose to collaborate with the organisers – to enhance participants lives.