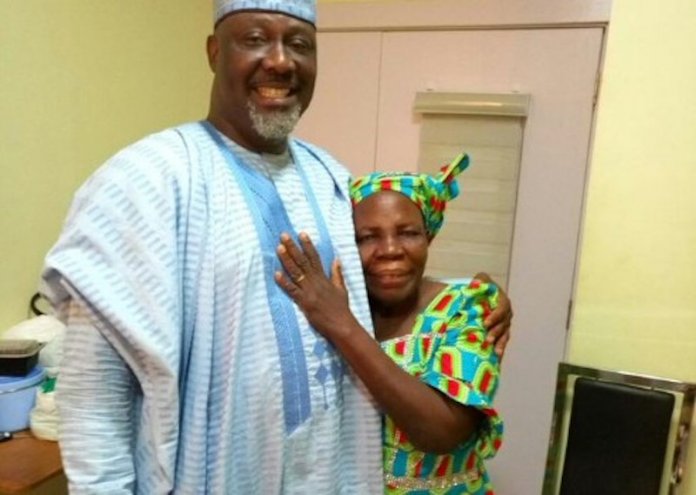 Outside the domain of politics where he has settled into the role of number one troublemaker and occasional clown with aplomb, Senator Dino Melaye is actually a devoted father, son and thoroughbred family man. There is nothing he loves more than his family so imagine his pain when his beloved mother abruptly passed on to glory last week.

The depth of Dino’s pain was obvious from the heartfelt notice he penned, expressing his grief and lauding his late mom Deaconess Comfort Melaye whom he regarded as his sister, mother, and best friend. The senator representing Kogi West at the national assembly treated her like a fragile glass while she yet lived. He went everywhere with her and doted on her with everything he had.

Over the past few days, condolences have been raining in on Dino’s Abuja residence as the Who’s Who in Nigerian politics come in their droves to comfort and support him in his hour of grief. Even his rivals across the political divide weren’t left out. There hardly remains any name of consequence that hasn’t sent out a message of sympathy.

Although life goes on for Dino – who was married to Tokunbo Melaye with three children with – he will never forget his precious mother for as long as he lives. Nor will he let her depart without a befitting send-off. He is already putting machinery in motion for a high octane burial ceremony that will shake Kogi to the foundations.

Even as he faces off in court with the federal government over a charge of giving false testimony to the police, Dino is really not bothered by public squabbles at the moment. What occupies his mind now is how best to celebrate his mother’s memory and legacy. To that end, consultations are ongoing with family and friends. He is leaving no stone unturned for what is sure to be a grand affair.