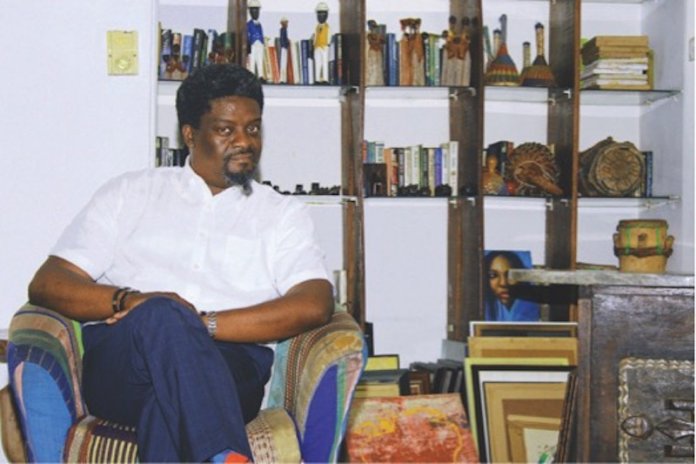 Looking dapper in a black blazer and fitted trousers, Dele Balogun cannot be easily missed in a crowd. His six-man band’s melodious music keeps everyone in their seats swaying gently from side to side with delightful grins he performs with depth and delight. He is the popular face behind ‘The Anchor’ has been serenading his high profile clients over the past decade. Following an interview with him,
Funke Olaode writes about the journey of a corporate-player-turned-event anchor, whose self-conviction plays an important role in actualizing his vision and mission

For years, he has been plying his trade as the anchorman at high-octane occasions. His six-man band’s melodious music keeps everyone in their seats swaying gently from side to side with delightful grins he performs with depth and delight. A game-changer who has transformed the hosting of corporate events in Nigeria, Balogun is also a pastor in This Present House, winning souls for Christ. Looking dapper in a black blazer and fitted trousers, Dele Balogun cannot be easily missed in a crowd.

His sense of humour, his eloquent delivery and high sense of professionalism distinguish him as a real anchorman and not a ‘joker’. Eloquent, articulate, self-assured, and suave, all combined to make him the go-to individual when it comes to corporate events. Balogun’s service delivery has earned him mouth-watering jobs among the high and mighty in society. He didn’t set out to be an anchorman, serenading high-profile clients, but self-discovery came after many years of plying his trade as a corporate player first as a banker and later telecommunication expert and now a pastor. He has combined his role perfectly well both in the corporate circle and in the church’s sanctuary – and has remained true to himself.

Born in Lagos but raised in the ancient city of Ibadan, the Oyo State capital, by his loving and disciplined parents. His late father was a senior lecturer at the University of Ibadan and his mother is a retired medical doctor. According to him, the Balogun are fervent believers of the Christian faith, resulting in the anchor man’s joining a choir at the age of six. Despite his exposure and education, he has not left the vineyard of God.

Recounting his good old days growing up in Ibadan, Balogun said, “I was born in Lagos but grew up in Ibadan right from a very young age. Ibadan to me was a blessing for me and those who were raised there. I have always expressed the pride of being raised in that ancient city because it gives you that strong of balance and identity in yourself as things were not done based on social classes or class system. It didn’t matter your background everybody was equal.”

Continuing, he added: “When we were young, my parents constantly sang into our ears that we should know whose child of who we are; family name, etc., that actually kept us in check to do what is right and what God stood for. I was blessed to have great parents who raised me in the way of the Lord. I was brought up to embrace God. I joined the choir at the age of six essentially and I haven’t stopped since except when I went to England for further studies. I have been brought up to know the important things in life. I am blessed to have parents with good health and long life. I did lose my father last year at the age of 87 and my mother is still alive and close to 80 now.”

No doubt, Balogun’s comfortable background gave him a good footing in life. After his secondary education, he moved to England in 1988 and enrolled at the University of Leicester for a degree in banking. He left the UK in 2000 to pursue his vision. Considering the mad rush to go abroad, what prompted his decision to return home? Is it self-conviction or a sense of patriotism?
His response: “Well, I lived in the UK for 12 years, I went to school; worked and the truth is that I have always wanted to come back home. You can call it patriotism. I have always had an eye on coming back and the opportunity arose in the year 2000 and I came back. I still go abroad but Nigeria is my base. Partly patriotism, self-conviction and I believe in the Nigeria project. Yes, we have our challenges but this is our land and we are all tasked with an assignment to fix it and we can be on the outside to fix it we have to be on the inside to make that happen.”
He returned to Nigeria in 2000 and joined the then Econet that went through four brand changes in four years. He later moved to Etisalat as a pioneer staff and together with his team helped build the company to one of the most enviable telecommunication companies in Nigeria. He later quit the corporate world to become his own boss – having been called into the ministry, he felt he needed something that would allow him to focus on his job and give top priority to God.

“I wear many caps as a banker, telecom expert and have a lot of experiences in the telecommunication sector. I am a pastor and an anchorman. And how I have been able to juggle all? God has been gracious. I didn’t even think I was juggling that much but the highest feeling of responsibility is being a pastor to look after others. I have been able to juggle it well. And being an anchorman – what many refer to as a master of ceremonies (MC) – I felt there was a gap in the corporate event space and I felt called to step into that space.”

Then what influenced his decision to be an anchorman? Is it Self-discovery or people’s observations?
“It is a bit of both in an equal measure. It is something that I had done for many years without even knowing it. I would go to an event, coordinate it and even in the church there is also event happenings and people look at me and suggested that I should do it professionally. In fact, a few people have been very instrumental of me doing it many years ago. I remember a gentleman who put me in his car and drove me to a photo studio that they needed to do my photo shoot today. So out of the push, this particular one was instructive because it got me thinking that ‘okay’ now I have to do this. So, it was partly self-discovery and people observations and God has helped me in that regard.”

Balogun as a master of ceremonies is always a man on the pulpit. You can call him a pastor in the afternoon and a master of ceremonies at night. At what stage did he develop a passion for the pulpit? And how does he strike a balance between the two?
“I didn’t develop a passion for the pulpit. It was a calling because it wasn’t something that I woke up in one day and said I wanted to do. I have been in church since I was a child. After coming back to Nigeria I came to Lagos. I was a choir in This Present House and that was how the call to leadership started. It was a gradual journey but within a few years I became a pastor in the choir,” he said. “And later on, my wife and I were appointed to co-start a work which we did and it was a turning point. I didn’t jump at it because I wasn’t sure but here we are. Interestingly, my wife and I were called about the same time. It’s been a journey of growth, ups, and downs but the truth is that you cannot serve God and remain down. It is always fulfilling and the best one can do.”
And striking a balance?

“The balance is not difficult because if you want to go scriptural, the Bible says we are the salt of the earth and light of the world and there is no way I cannot function outside of the church and there is no conflict because of my belief and standard,” Balogun explained. “I do not compromise my standards for anything. God has helped me and He will continue to help me. So striking a balance between the two is not difficult and of course, sometimes there are hard decisions that you take, the prayer is to take the right decision that will glorify God.”

If there is anything that gives Balogun fulfilment, it is the ability to see other’s people’s lives transformed. “I feel most fulfilled in helping people,” he admitted, “which is ministry and ministry for me is not just about preaching but bringing God to people and seeing that their lives are transformed in counselling, preaching, advising in whatever way one is meeting spiritual needs. Those are my best moments knowing that I am fulfilling my calling. And from my professional perspectives is when I deliver an event into the point where you know that every expectation of the client has been met and even surpassed it, it is also very special.”

To stay on top of one’s game, Balogun shares his life lesson. “There are always life lessons but more important is: whatever your hands find to do, do it with all your mind. Diligence is very critical, tenacity is very importance, focusing on the positive and not being a pessimist is very key. We all know that procrastination is an enemy that causes delay,” Balogun warned.
“Try and be the best at what you do, try and invest in yourself but most important, try and bring God close to everything you are doing. You cannot function or thrive without God. God created each and every one of us and he knows what the best is for us. Keeping the line of communication with God is very critical. And that is the differed between best and great.”