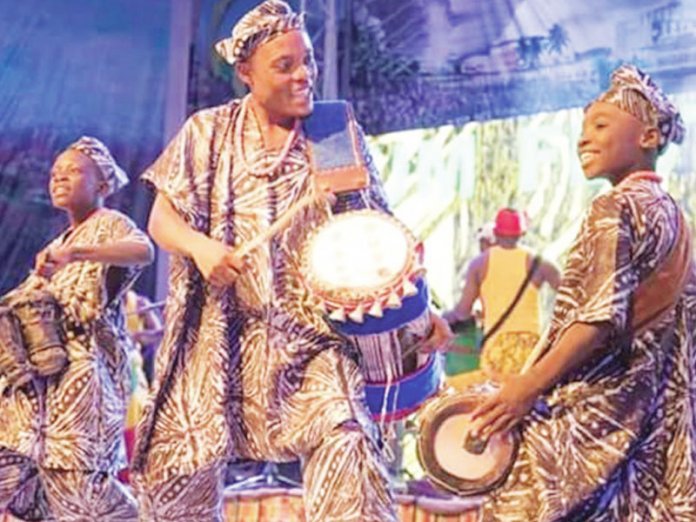 Leading ICT company MTN Nigeria and International Breweries via one of its brand, Trophy Lager were among the major brands that threw their weight behind the just concluded fourth edition of the African Drum Festival.

An initiative of the Government of Ogun State, the festival held its inaugural edition in the state in 2016. Originally dubbed as the Nigerian Drum Festival, it has quickly metamorphosed to African Drum Festival because of the reception and participation it received from other African Countries like Benin Republic, Ivory Coast, Uganda, DR Congo and a host of others.

The festival is designed to bring together participants from across the world to showcase the rich cultures of the different ethnic groups through dance, exhibitions, music and Drums.

Tapping into the theme of the festival ‘Drumming the Future’ which focused on the potential socio-economic contribution of Drumming to the future of Africa, MTN Nigeria sponsored the festival as part of its continued effort and contribution towards preserving the rich African culture.

“MTN as a brand is wholly African, and it is committed to ensuring that the African story is shared with the rest of the world. Drums are symbolic in the African tradition. They project our strength, tell our story, protect the people and promote our legacies.

“For us, this festival is a worthy opportunity to tell the African Drum story to the rest of the world and that is why we have consistently supported the various editions of the festival,” said Feb General Manager, Brand and Communications, MTN Nigeria, Richard Iweanoge.

On its part, Trophy Lager which is popularly referred to as the pride of the South-west and widely accepted as the Honourable beer that is deeply rooted in the region’s socio-cultural values aligns with the vision of the festival.

The Legal and Corporate Affairs Director, International Breweries, Otunba Michael Daramola remarked that “the African Drum Festival is a cultural showpiece which demonstrates our uniqueness, attributes, our rich culture and tradition of the black people.

“Trophy is a beer that is closely linked with culture and a brand that believes in celebrating life and always rising to the occasion to make connections and bring people together.”

The three-day festival which ran from April 25 to 27, featured over 20 states, 14 foreign countries and 70 private troupes. Notable highlights from the event include performances by the Egbere Band who gave a powerful rendition of Teni the Entertainer smashing hit ‘Case’; Ivory Coast’s Moyo Black Troupe who dazzled the crowd with their superb knowledge of Nigerian music with their powerful rendition of Afrobeat legend Fela Anikulapo-Kuti’s evergreen hit ‘Lady’; and of course the Anambra State Troupe that got Sally Mbanefo, a former Director General of Nigeria Tourism Development Corporation dancing.

As part its sponsorship, Trophy organised a music concert which was headlined by two music greats, Pasuma and 9ice whose genres resonate with the culture of the Ogun people. They performed to resounding applause of acceptance and unconfined joy for the opportunity to witness both artistes.