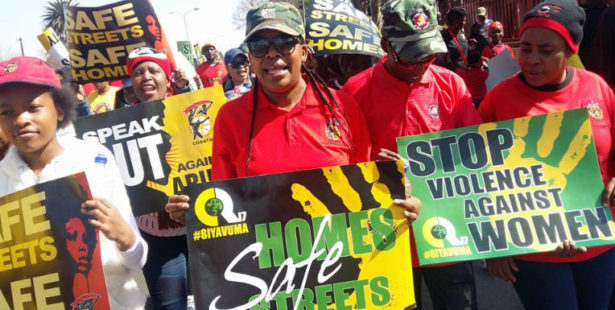 A group under the aegis of Concerned Abuja Residents Friday took to the streets to protest the recent arrests of over 100 women from public places on suspicion of loitering and prostitution.

The coalition sought an end to what they referred to as the unlawful raids by the FCTA Joint Task Team, which is made up of the police,  Department of Development Control, Abuja Environmental Protection Board (AEPB) and the Social Development Secretariat (SDS).

One of the group’s coordinators, Mrs. Chioma Agwuegbo, in the petition to the minister, said: “News and social media have been replete with reports of FCTA officials going to bars, restaurants and nightclubs around Abuja to arrest women on suspicion of being sex workers. Women who witnessed these arrests shared in media interviews, as well as on social media under the #AbujaPoliceRaidonWomen Twitter hashtag that the officials only arrested women.

“This march is to call on the Federal Government of Nigeria to curb the excesses of the officials from the Federal Capital Territory Administration (FCTA) Joint Task Team. The women who were arrested have reported cases of violence, sexual assault and molestation at the hands of the police officers and other members of the joint task force led by AEPB. These women also stated that they were denied access to legal representation.”

They further alleged that many of the arrested women were arraigned before a mobile court set up for the purpose of prosecuting the cases.

They claimed the women were advised by the government officials to plead guilty or risk serving jail term up to six months.

“Upon pleading guilty, they were sentenced to three months in jail with an option of N3,000 fine.

“Citizens are marching because it is clear that the raids and arrests are in contravention of the Nigerian constitution specifically Sections 34, 35, 36, 41 and 42, which affirm Nigerians’ freedom from torture; right to free movement and fair hearing; innocence until proven guilty; and legal representation,” they stated.

It was further alleged that even women who go to nightclubs with their husbands were also raided alongside suspected sex workers.

Some of the demonstrators wielded placards with inscriptions such as “Break the silence on police brutality”, “Respect my existence or expect my resistance”, “Where are the men?” and “Sex workers demand an end to police and AEBP harassment”.

Meanwhile, the National Coordinator, Nigerian Sex Workers Association, who simply identified herself as Amaka, told journalists that they were frustrated by the fact that only women are targeted and subjected to humiliation whenever a raid is carried out at a club or bar, while the men are usually set free. She said not even the hotel owners are ever questioned.

They further alleged that they were being raped by the members of the taskforce whenever there was a raid.

According to the group, “The level of impunity being exercised by the Nigeria law enforcement agents is despicable and unacceptable. The failure of the Nigeria government to investigate and punish state and non-state actors accused of human rights violations in the country has led to the entrenchment of abuses such as torture, illegal detention and sexual exploitations of women.

“It is time we ended this widespread impunity by the security agents; the government investigated reports of abuses against women and protected the bodily autonomy and the dignity of women.

“We, therefore, urge the FCT to stop the raids immediately and stop arresting women on the suspicion of prostitution and to respect the rights of Nigerians to gather in public spaces free of fear of violence and intimidation.”