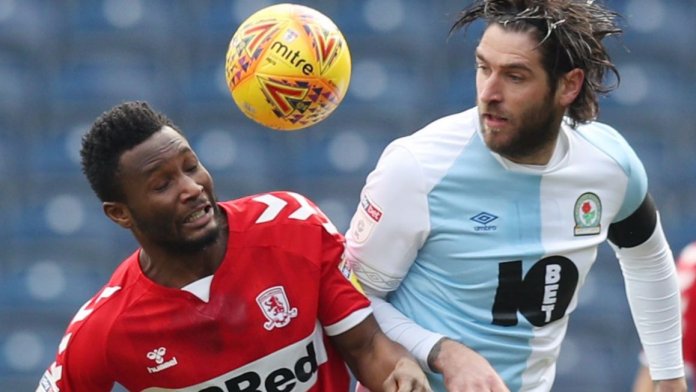 Super Eagles Captain John Mikel Obi waited till the last day of the regular season before netting his maiden goal for Middlesbrough in their 2-1 win against Rotherham United at the New York Stadium.

The victory meant nothing to Boro and their fans as the 73 points they garnered in the Championship season could not guarantee them a place in the top six positions after Derby County defeated West Brom 3-1 in a simultaneous game.

Speaking after the game, the former Chelsea stalwart strongly hinted that he was not extending his contract with Middlesbrough, stressing he has options elsewhere and wants to win trophies.

”I don’t know, you can never say never, that’s why I said they. My contract ends, if there’s a conversation, okay fine,” Mikel told BBC Sport.

”It’s a great club, it’s a big club. They will find the right players, get that dressing room back and make sure next season they are in the playoffs or automatic promotion.”

Asked if he would like to stay at Boro and if he has other options, Mikel answered : ”I don’t know, we’ll see what happens. I have conversation with my people and then we’ll see what comes out, options here and there.

”There’s a lot of option but you always have to pick the right one, the one that is going to suit you and suit the way you play and what you want to achieve.

”I still want to win trophies, so I will go somewhere where you know, the players, the fans and the team want to win.”

That Mikel’s goal was his first in English League football since September 21, 2013 when he found the net in Chelsea’s 2-0 win against Fulham and his first strike in five years and 226 days.

He made his 267th career appearance in the Premier League and Championship against The Millers, with 249 of those games in the colours of Chelsea.

The Eagles captain penned the short term contract until the end of the 2018-2019 season after terminating his contract with Chinese Super League’s Tianjin Teda.

Mikel appeared in nineteen matches across all competitions for Middlesbrough and captained the club in their last six games in the EFL Championship.