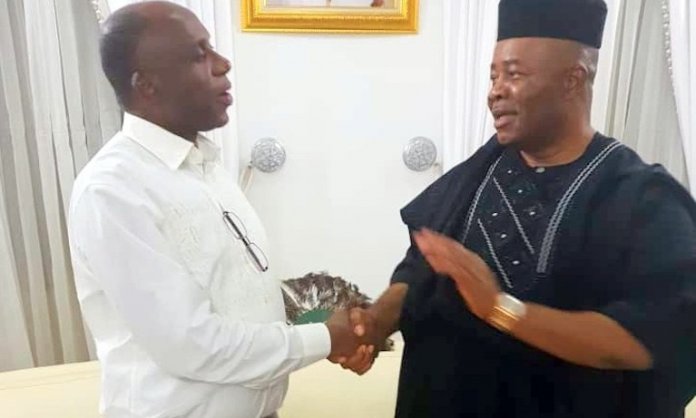 However, it was not known that they were at loggerheads. And what if they were? Of what use is their reconciliation? Recent events point to the fact that both actors in this comedic reconciliation are losing relevance. If anything, this reconciliation is a gimmick to keep them visible.

Amaechi, who is currently Minister of Transportation, has attempted to wield power in his state on several occasions by proxy, to no avail. Each time, he has been soundly defeated by his successor, Nyesom Wike.

The latest attempt must have haunt the most, with his influence waning in Rivers politics after the courts barred his party from participating in the election in Rivers. Amaechi somehow contrived to go into the election with a candidate that even the man’s neighbours didn’t know and expected him to win the governorship race.

All because he was blinded by his quest to unseat Wike and be the godfather of Rivers politics, he let the military loose on his people while backing a candidate from a lightweight party in a foolhardy bid to unseat Wike. He lost woefully.
And Akpabio? He decamped a little over a year ago and immediately started chest-thumping, promising his new party he would help unseat his erstwhile godson, Governor Udom Emmanuel, in a way similar to how Hitler invaded Poland.

“Warsaw saw war and war saw Warsaw,” Akpabio boasted before the election. Unfortunately for Akpabio, not only did Emmanuel bat his challenge away like one would do an annoying fly, he also lost his senate seat. Alas, in this war, he met his Waterloo, like Napoleon.

And since when did Keyamo become a press officer to tin gods? If we hazard a guess, Keyamo , who was Director of Strategic Communications for President Muhammadu Buhari’s re-election, doesn’t care one bit about these demystified, egotistic politicians. Keyamo explained that the meeting, which was at the instance of Akpabio, talked about their various disagreements from their days as governors in PDP and in the then Nigerian Governors’ Forum. While emphasise to us at who instance a meeting was called?

It is obvious that Amaechi and Akpabio are looking back wistfully at the good times with nostalgia. This was when they wielded power as unquestioned executives of two of Nigeria’s richest states under the umbrella of the PDP, the same party they keep accusing of squandering resources when the country enjoyed the benefit of sky-high oil revenue.

Now, as the first term of the present APC government winds to a close, these characters will soon be out of their jobs, and are obviously seeking ways to seem important by putting up a facade of relevance.