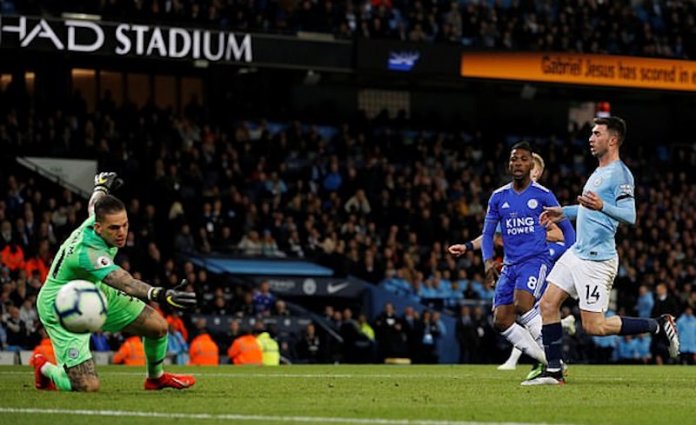 If Iheanacho had scored that begging chanced deep into the Premiership game at Etihad, the Citizens would have been trailing Liverpool on 93 points going into Sunday’s final round of matches rather than the edge of 95 points they enjoy now.

But most of the fans who pilloried the former Manchester city forward for his tepid play that went wide off mark insinuated that Iheanacho may have done his former club the favour to enable them win the trophy.

Iheanacho who moved from City in 2017, was put through clear on goal in the dying moments by Hamza Choudhury but he dragged his effort well wide of the post with just Ederson in goal for City to beat.

He could have come back to haunt his former side but instead City go into the final round of fixtures ahead of Liverpool in the title race with that stunning 30-yard kick by Vincent Kompany.

After that enthralling match, football fans – including those from Liverpool – flocked to social media to poke fun of Iheanacho.

One Liverpool supporter, devastated by the last-gasp miss, joked on Twitter: “That must be Iheanacho’s best game for Man City.”

Another social media user wrote: “Iheanacho should receive a Premier League medal after his shocking miss.”

But the teasing didn’t stop there, with plenty more fans taking to Twitter to voice either their frustration or delight depending on which camp they sit in.

Longclaw 🐺 (@somtozil) May 6, 2019 noted: “City selling Iheanacho for him to miss a sitter to help them win the league 2 years.”

One Manchester United fan, Scott Banks (@Twatots) May 6, 2019 clearly pleased with the result, joked: “Iheanacho couldn’t bear the thought of listening to Liverpool supporters for the next 40 years either. Good lad.”

“Someone needs to investigate that, Iheanacho didn’t want to score there,” another football fan alleged following the final whistle.

Iheanacho’s miss allowed Pep Guardiola’s men to hold on to their crucial advantage and they will be confident of securing the Premier League title on Sunday.

Man City is to travel to Brighton needing a win to defend their top-flight crown, while Liverpool host Wolves at Anfield in what should be a brilliant finale to the season.