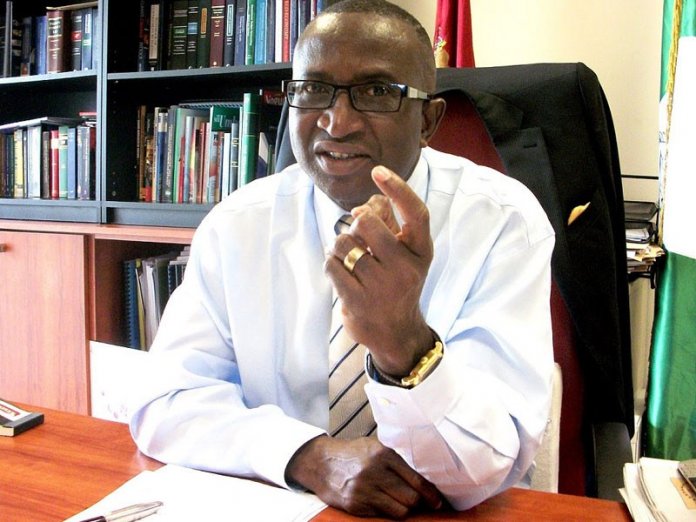 As President Muhammadu Buhari’s first term winds down, Ayomide Yusuf writes that vibrant individuals like former Senate Leader, Victor Ndoma-Egba, should be a member of the impending Federal Executive Council

In the light of the backlash that has trailed President Muhammadu Buhari’s administration in the last four years vis-à-vis the performance of members of his cabinet, pundits are of the opinion that the President has a golden opportunity to appoint eminently qualified men and women who would help in translating his vision and consolidating on his achievements as he begins his second term in office.

Prominent on the long list in the public space is a former Senate Leader and a former Chairman of Niger Delta Development Commission (NDDC), Victor Ndoma Egba.

He is an exceptionally talented lawyer and gentleman. Over the years, he has built a network of friends; spreading his tentacles across the length and breadth of Nigeria and beyond. Ndoma-Egba is indisputably a leading light from whatever perspective one chooses to assess him.

During his 12 year-old in the Senate, Ndoma-Egba sponsored and co-sponsored 38 bills most of which have become Acts of the National Assembly including the famous Freedom of Information Bill. This is an unrivalled feat in the history of parliamentary representation in Nigeria.

In the dark days of the cabal, Senator Ndoma-Egba stood to be counted as one of the wise men who framed the now famous “Doctrine of Necessity” that was adopted to stabilize the ship of state. Senator Victor Ndoma-Egba has remained the first and only lawyer to be recognised as a Senior Advocate of Nigeria while serving at the National Assembly.

Senator Victor Ndoma-Egba is a man of prodigious intellect and a man imbued with the capacity to multi-task.

Since 1984, Ndoma-Egba has built an untainted reputation of excellence, integrity, credibility and character in public service in addition to a thriving private legal practice which dates back to 1979 at K.G. Agabi Chambers in Ogoja, Cross River State.

He has served on many occasions as chairman or member of different government boards, agencies and commissions making unrivalled contributions to the development of his state and country.

In 1987, Senator Ndoma-Egba with a junior colleague in the bar, Richard Ebri (deceased) founded the highly reputable Ndoma-Egba, Ebri & Co (Legal Practitioners) in Calabar. For almost two decades after the demise of Richard Ebri, Senator Victor Ndoma-Egba has maintained the name of the chambers. He is a personification of loyalty. He gives absolute loyalty.

President Buhari needs a man that is credible, respected across the geo-political zones and amongst his people.

He is compassionate and kind to all manner of people. In 2007, Ndoma-Egba initiated the entrepreneurial scheme where more than 120 people were trained in different vocations/skills and empowered with start-up capital and now own their businesses. As a serving Senator of the Federal Republic, Ndoma-Egba was a master of legislative advocacy where he attracted projects in excess of N7 billion to his constituency in the Central Senatorial District of Cross River State.

His unceremonious exit from the hallowed chambers of the Nigerian Senate after 12 years of meritorious service to his fatherland has kept the tongues of watchers of Nigerian politics wagging and their mouths yawning for more of his unmatchable legislative depth. The void created by his absence at the 8th Senate is quite undeserving to the Nigerian people at this critical moment in history.

Recognising his capacity, President Buhari appointed him as the Chairman of NDDC and within two years of his stewardship, NDDC rehabilitated 90 per cent of roads in Cross River State.

The former lawmaker said that the initiative was to attract development to the state by way of expanding and rehabilitating urban and rural roads for easy movement of goods and commuters.

Justifying the intervention, Ndoma Egba said, “I have said this before and let me say it again, whatever road you see anywhere in the state that was tarred in the last two years, 90 per cent of the chances are that they were tarred by NDDC or the Ministry of Niger Delta.

“I want to be challenged on this. We have roads right from Calabar South to Bakassi, right down to Obudu and Obanliku Local Government area of the state.

“If you see any school renovated in the last two years, new roof, new building, new furniture; 90 per cent of the chances are that it was done by NDDC.

“These are some of the achievements we have recorded in Cross River. We remember that once upon a time, the Calabar-Itu Road was impassable, but the road became passable by the effort of NDDC,” he said.

According to him, same goes for the Calabar-Ikom-Ogoja-Obudu road.

He pointed out that from Ikom to Calabar that usually took up to five hours is now a journey of two hours plus.

Based on his track records in the National Assembly from 2003-2015, Ndoma-Egba is believed to have attracted over 74 projects within the period under review and facilitated federal employment for over 358 constituents.

He added that he also provided scholarship for 700 undergraduates, organised skills acquisition training, and sponsored the Freedom of Information Bill, among others.

“Some of my projects include the Faculty of Law in the University of Calabar, the Irruan Water Dam in Boki Local Government, the Edor community water project and many others,’’ he said.

In the dark days of the cabal, Senator Ndoma-Egba stood to be counted as one of the wise men who framed the now famous “Doctrine of Necessity” that was adopted to stabilize the ship of state. Senator Victor Ndoma-Egba has remained the first and only lawyer to be recognised as a Senior Advocate of Nigeria while serving at the National Assembly