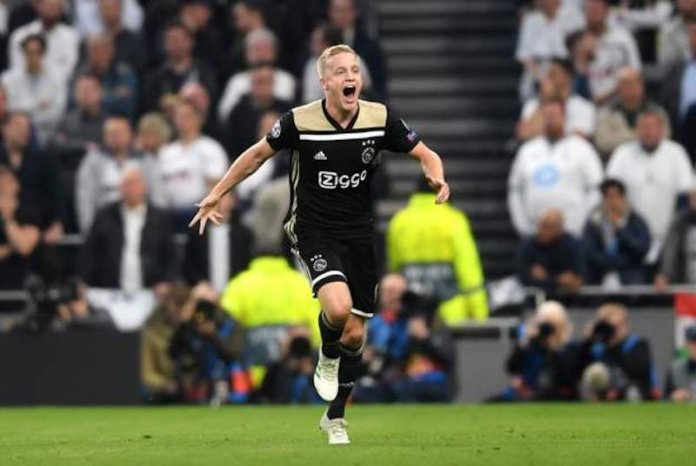 Spurs struggled to overcome the absence of forwards Harry Kane and Son Heung-min – injured and suspended respectively – and their job was made even harder by the loss of defender Jan Vertonghen after he suffered a facial injury in the first half.

Vertonghen’s problem raised questions about player welfare after he was allowed to continue, albeit for only a few seconds, when he was clearly badly shaken up after an aerial collision involving team-mate Toby Alderweireld and Ajax goalkeeper Andre Onana. He eventually had to be supported by two members of the Spurs staff as he went off.

Tottenham tried to force the pace after the break with plenty of possession, but it was Ajax who came close to adding a second when David Neres struck the inside of the post with Lloris beaten.

Ajax held on to their lead in relative comfort and it will need a stirring Spurs comeback to prevent the Dutch side facing either Barcelona or Liverpool in the final on 1 June.

Ajax’s advance to the Champions League semi-finals has made them the talk of European football after the manner in which they eliminated holders Real Madrid and Italian champions Juventus.

And it was easy to see what all the fuss is about as the visitors demonstrated maturity, composure and class in such a high-pressure environment to overcome Spurs.

Ajax took the game by the scruff of the neck early on, secured the goal their superiority deserved, then took the sting out of matters when required to close out the win.

And in Barcelona-bound Frenkie de Jong, 21, and fellow midfielder Van de Beek, who is just a year older, this is an Ajax team with the class and youthful appearance that plays to this club’s greatest traditions.

Ajax have almost come from nowhere after the group stages – but this is a team that looks like they have the quality and confidence to go all the way.

The winners of the tie will meet either Barcelona or Liverpool in the final in Madrid on 1 June.