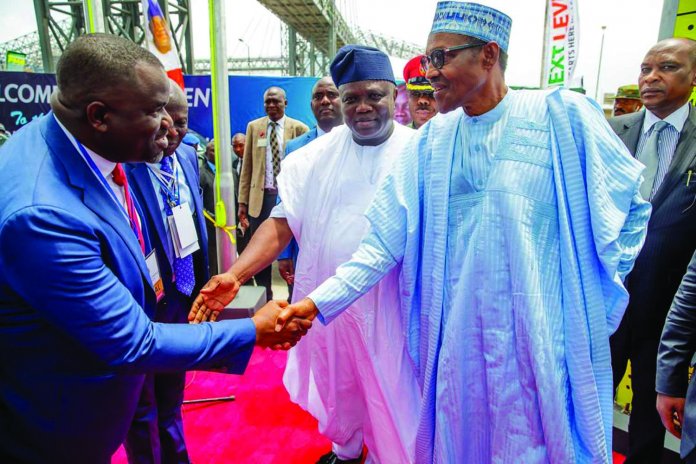 The Oshodi Transport Interchange Project, which is part of the Lagos State government’s planned effort to ease traffic challenges in Lagos, was during the week commissioned by President Muhammed Buhari, among a couple of other projects, following his second working visit to the state.  Described as Africa’s first mega bus terminal, the president had during the inauguration observed that the project would impact development in and across the state.

According to Buhari, the new Oshodi Transport Interchange; the Mass Transit Medium and High capacity public buses and the reconstructed Murtala Mohammed International Airport Road by Lagos State Government clearly demonstrate the need to continue to provide high impact projects for the development of infrastructure and opportunities for job creation at all levels.

He further noted that “Just as this transport interchange with three different terminals is going to change the face of public transportation; the mass transit buses totaling 820 will move the people of Lagos State in a more comfortable and more efficient manner. These projects by Lagos State are perfectly aligned with the efforts of the Federal Government to improve the country’s infrastructure especially in the transport sector.”

The project under the administration of Akinwunmi Ambode, the governor of Lagos State seeks to transform Oshodi into a world-class Central Business District (CBD) with business, travel and leisure activities conducted in a serene, secure, clean, orderly and hygienic environment.Constructed purely by an indigenous construction firm Planet Project, the Oshodi Transport Interchange as a people-oriented project would help at least one million residents commute easily daily.

The Chief Executive Officer Planet Project, Mr. Biodun Otunola had disclosed this while conducting newsmen round the multi-level transport interchange. According to Otunola, Terminal Three is ready and will kick off operations on May 2. Terminals One and Two are expected to be ready in less than three weeks. The terminals are expected to take care of inter and intra city transports. “About one million people use transport in Lagos State daily.

“What we have done is to create a state-of-the-art terminal that will ensure security, encourage passengers to shop as they are travelling and make them as comfortable as possible with easy to access ticketing system. The Multi-level bus terminal in Oshodi is to address the traffic, environmental, safety and transpiration problems in and out of Oshodi and Lagos at large.

“As you all know, a lot of us travelling from one part of Lagos to the other have to use this particular spot where we are, which is Oshodi. Oshodi is perhaps the busiest transport interchange in Africa. Based on the study we carried out at the initial stage, we discovered that over 76% of the open space in Oshodi is occupied by transport activities.   Here, we have three terminals. Terminal one is for inter-city transportation. So, if you are travelling to any part of Nigeria, including West Africa, you will be able to get the bus here and the terminal will run for 24 hours. The whole terminal has been designed to have all world-class facilities.

“Terminal two is to serve Lagos West and all the people going towards FESTAC, Mile 2, Abule Egba, Oshodi, Isolo and Ayobo. Terminal three will also serve people going to Lagos east and Lagos Island, Ojota, Ikorodu, Marina, Obalende, including Berger.” The terminal is meant to station up to 500 buses of Marcopolo brands comprising of 27 and 70 seat buses.”

Continuing he said, “each of the floor is about 3,700 square meters and that can take close to 40, 000 people at a time. The terminals can take one million people every day. And each of the terminals has six lifts and one escalator. So in all we have 18 lifts and three escalators. The skywalk connecting the three terminals is the longest skywalk ever in the country.”

The Oshodi Transport Interchange Project is part of the Bus Reform Initiative of the state government, designed to transform the axis forever and enhance connectivity. While is a laudable project, maintenance should be of utmost concern when it fully commences operations.