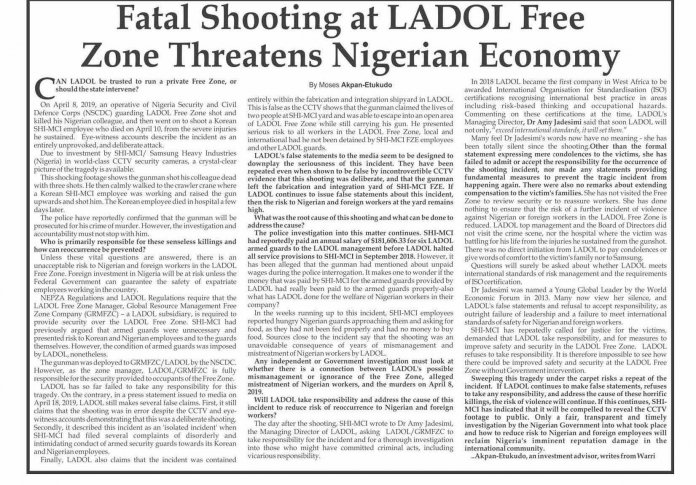 Can LADOL be trusted to run a private Free Zone, or should the state intervene?

On April 8, 2019, an operative of Nigeria Security and Civil Defence Corps (NSCDC) guarding LADOL Free Zone shot and killed his Nigerian colleague, and then went on to shoot a Korean SHI-MCI employee who died on April 10, from the severe injuries he sustained.  Eye-witness accounts describe The incident as an entirely unprovoked, and deliberate attack.

Due to investment by SHI-MCI/ Samsung Heavy Industries (Nigeria) in world-class CCTV security cameras, a crystal-clear picture of the tragedy is available.

This shocking footage shows the gunman shot his colleague dead with three shots. He then calmly walked to the crawler crane where a Korean SHI-MCI employee was working and raised the gun upwards and shot him. The Korean employee died in hospital a few days later.

The police have reportedly confirmed that the gunman will be prosecuted for his crime of murder. However, the investigation and accountability must not stop with him.

Who is primarily responsible for these senseless killings and how can reoccurrence be prevented?

Unless these vital questions are answered, there is an unacceptable risk to Nigerian and foreign workers in the LADOL Free Zone. Foreign investment in Nigeria will be at risk unless the Federal Government can guarantee the safety of expatriate employees working in the country.

NEPZA Regulations and LADOL Regulations require that the LADOL Free Zone Manager, Global Resource Management Free Zone Company (GRMFZC) – a LADOL subsidiary, is required to provide security over the LADOL Free Zone. SHI-MCI had previously argued that armed guards were unnecessary and presented risk to Korean and Nigerian employees and to the guards themselves. However, the condition of armed guards was imposed by LADOL, nonetheless.

The gunman was deployed to GRMFZC/LADOL by the NSCDC. However, as the zone manager, LADOL/GRMFZC is fully responsible for the security provided to occupants of the Free Zone.

LADOL has so far failed to take any responsibility for this tragedy. On the contrary, in a press statement issued to media on April 18, 2019, LADOL still makes several false claims. First, it still claims that the shooting was in error despite the CCTV and eye-witness accounts demonstrating that this was a deliberate shooting. Secondly, it described this incident as an ‘isolated incident’ when SHI-MCI had filed several complaints of disorderly and intimidating conduct of armed security guards towards its Korean and Nigerian employees.

Finally, LADOL also claims that the incident was contained entirely within the fabrication and integration shipyard in LADOL. This is false as the CCTV shows that the gunman claimed the lives of two people at SHI-MCI yard and was able to escape into an open area of LADOL Free Zone while still carrying his gun. He presented serious risk to all workers in the LADOL Free Zone, local and international had he not been detained by SHI-MCI FZE employees and other LADOL guards.

LADOL’s false statements to the media seem to be designed to downplay the seriousness of this incident. They have been repeated even when shown to be false by incontrovertible CCTV evidence that this shooting was deliberate, and that the gunman left the fabrication and integration yard of SHI-MCI FZE. If LADOL continues to issue false statements about this incident, then the risk to Nigerian and foreign workers at the yard remains high.

What was the root cause of this shooting and what can be done to address the cause?

The police investigation into this matter continues. SHI-MCI had reportedly paid an annual salary of $181,606.33 for six LADOL armed guards to the LADOL management before LADOL halted all service provisions to SHI-MCI in September 2018. However, it has been alleged that the gunman had mentioned about unpaid wages during the police interrogation. It makes one to wonder if the money that was paid by SHI-MCI for the armed guards provided by LADOL had really been paid to the armed guards properly-also what has LADOL done for the welfare of Nigerian workers in their company?

In the weeks running up to this incident, SHI-MCI employees reported hungry Nigerian guards approaching them and asking for food, as they had not been fed properly and had no money to buy food. Sources close to the incident say that the shooting was an unavoidable consequence of years of mismanagement and mistreatment of Nigerian workers by LADOL.

Any independent or Government investigation must look at whether there is a connection between LADOL’s possible mismanagement or ignorance of the Free Zone, alleged mistreatment of Nigerian workers, and the murders on April 8, 2019.

Will LADOL take responsibility and address the cause of this incident to reduce risk of reoccurrence to Nigerian and foreign workers?

The day after the shooting, SHI-MCI wrote to Dr Amy Jadesimi, the Managing Director of LADOL, asking  LADOL/GRMFZC to take responsibility for the incident and for a thorough investigation into those who might have committed criminal acts, including vicarious responsibility.

In 2018 LADOL became the first company in West Africa to be awarded International Organisation for Standardisation (ISO) certifications recognising international best practice in areas including risk-based thinking and occupational hazards. Commenting on these certifications at the time, LADOL’s Managing Director, Dr Amy Jadesimi said that soon LADOL will not only, “exceed international standards, it will set them.”

Many feel Dr Jadesimi’s words now have no meaning – she has been totally silent since the shooting. Other than the formal statement expressing mere condolences to the victims, she has failed to admit or accept the responsibility for the occurrence of the shooting incident, nor made any statements providing fundamental measures to prevent the tragic incident from happening again. There were also no remarks about extending compensation to the victim’s families. She has not visited the Free Zone to review security or to reassure workers. She has done nothing to ensure that the risk of a further incident of violence against Nigerian or foreign workers in the LADOL Free Zone is reduced. LADOL top management and the Board of Directors did not visit the crime scene, nor the hospital where the victim was battling for his life from the injuries he sustained from the gunshot. There was no direct initiation from LADOL to pay condolences or give words of comfort to the victim’s family nor to Samsung.

Questions will surely be asked about whether LADOL meets international standards of risk management and the requirements of ISO certification.

Dr Jadesimi was named a Young Global Leader by the World Economic Forum in 2013. Many now view her silence, and LADOL’s false statements and refusal to accept responsibility, as outright failure of leadership and a failure to meet international standards of safety for Nigerian and foreign workers.

Sweeping this tragedy under the carpet risks a repeat of the incident.  If LADOL continues to make false statements, refuses to take any responsibility, and address the cause of these horrific killings, the risk of violence will continue. If this continues, SHI-MCI has indicated that it will be compelled to reveal the CCTV footage to public. Only a fair, transparent and timely investigation by the Nigerian Government into what took place and how to reduce risk to Nigerian and foreign employees will reclaim Nigeria’s imminent reputation damage in the international community.