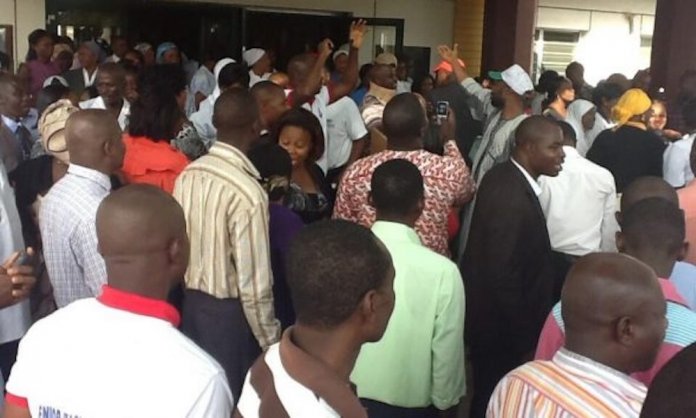 The teachers, who were over 500, converged on Ikere Ekiti around 8am, saying several efforts to get the attention of the government have not been successful, as no concrete step has been taken to either pay them or dialogue with them.

Speaking on behalf of his colleagues, Mr Bayo Omoyeni said that letters were written to the governor, his wife, the deputy governor and some traditional rulers urging them to intervene and end the untold hardship being experienced by the teachers, adding that: “These efforts have not yielded any desired result because we have not received any communication from them.

“I am speaking on behalf of secondary school teachers employed in September 2018. We are here today to protest the non-payment of our salaries. And we want the government to immediately react to our demand and such reaction must be done between now and Monday when we are resuming for third term.

“We are using this medium to tell Mr Governor to immediately speak with us. How can the governor set up a panel where none of us were invited to come and defend our case? The news all over the state is that we are politicians, that we are partisan; we want to use this medium to tell him that we are not members of any political party. We are youth of Ekiti State seeking employment and were given employment by the previous administration and it is trite that government is a continuum.

“We went through interview and letters of employment were given to us and not only that, we were deployed to various schools in the state to work. Up till today, there has been no correspondents with us by the present government. The government could owe us salaries but we demand that the governor speak with us.”

According to Omoyeni, “We can’t resume the third term without knowing what is going to happen to the two terms already spent. The governor should save us from psychological trauma by meeting with our representatives. Our people are having problems with their landlords in their areas of postings.

“The information at our disposal is that our counterparts that were employed the same time who are in other vocations have been attended to. They have been doing their biometric screening. We want to see that as discrimination against this crop of teachers. As we speak, nobody has addressed us on the issue of biometric screening that will lead to payment.

“Again, I want to stress that our direct employer, the teaching service commission, has been telling us that it doesn’t know whether we will be employed or not and this is not acceptable to us. Several letters have been written to the governor, the wife, deputy governor, some of the monarchs and we even held solidarity rally for the governor after the general election. We have done rallies to congratulate the governor and jingles to congratulate him. All these are to show that we are loyal citizens of Ekiti.”

Reacting to the demands of the aggrieved teachers, the Commissioner for Education, Mr Foluso Daramola, said that government was concerned about the plight of this category of teachers, adding that the committee set up to look into the circumstances of their employment has almost concluded its work.

“The government is concerned about their plight in the sense that they are equally Ekiti indigenes. Ordinarily, if this government does not have human face, such a last minute employment would have been ignored. But this governor says these people are my people. So everything must be done on its own merit. That is why they set up a high powered committee headed by the deputy governor.

“So their work is at an advance stage now and they will advise government on the way forward. The government can’t just inherit them without looking into how they are employed. This government is passionate about every citizen and it has come to restore the values that we lost in the past. That is why the governor is interested in how they are employed before knowing what to do. If the processes leading to their employment were exploited, they should be hopeful,” Daramola said.