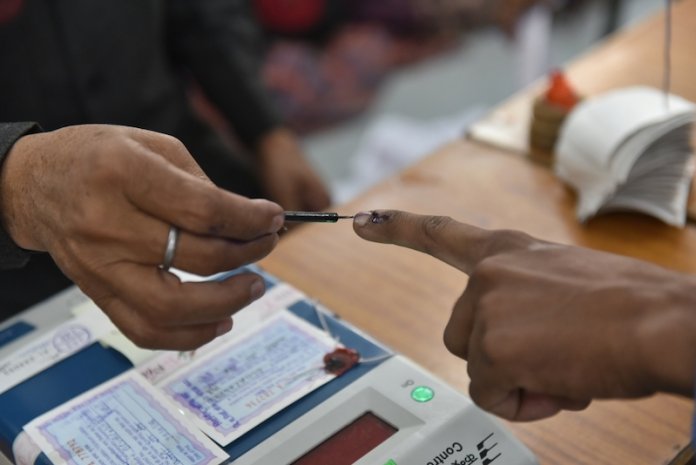 The election will underscore the ethos and values of the country in the coming decades, writes Rajendra Aneja

The world’s largest democracy India, with a population of 1.3 billion people, is voting in these few weeks to elect a new government. A general election in India is always a milestone, due to the sheer number of people voting, around 900 million. The electoral expenditure is estimated at USD four billion. India is also a functioning democracy where the verdict of the ballot-box rules.

The Indian elections are daunting in sheer numbers too. Over 8,200 candidates from about 450 political parties, compete for 543 seats in Parliament. There are around 9,27,000 polling stations across the country, with about 20,000 in forests and semi-forest areas, since no voter can be more than two kilometres away from a polling booth. Five million government officers and security personnel manage the elections, which deploys 1.8 million electronic voting machines (EVMs).

Elections in India are also important because the country is a crucible of people with varied religions like Hinduism, Islam, Christianity, Sikhism, etc., and an assortment of castes and tribes. Can people of various hues live together harmoniously? Hitherto, India has proved that they can do so, though there are occasional ruptures.

India is growing rapidly at an average GDP of seven per cent. Nevertheless, it is yet a poor country. About 23.6 per cent of the population lives below the poverty line. Almost 40 per cent of the citizens in the urban areas like Mumbai, Kolkata, Chennai, etc., survive in slums. In the villages, about 15,000 farmers commit suicide annually, since they are unable to sell their wheat, rice, etc., at remunerative prices and cannot repay their loans. So, can a large nation accelerate economic growth, reduce inequalities and yet continue to be an effective functioning democracy?

India is thus a test-tube democracy for the world to watch. Can a nation with varied religious and cultural hues, political polarisations and economic distresses survive and prosper within a democratic framework.

The current elections are crucial, for they are not merely about which party will govern India, or which Prime Minister will lead the country, but what will be India’s ethos in the coming decades.

India was governed for many decades by the Indian National Congress party, founded by Mahatma Gandhi, to fight for the independence of the country from the British. The party was ably led by Pandit Jawaharlal Nehru, India’s first prime Minister and also by his daughter, Mrs. Indira Gandhi. Subsequently, her son Rajiv Gandhi led the party and the country for a few years, before his assassination. His wife, Mrs. Sonia Gandhi led the party to victory in 2004, but being of Italian origin could not become the Prime Minister. Hence, a professional economist like Mr. Manmohan Singh was elevated as Prime Minister.

As the economy deteriorated, the leading opposition party, the Bharatiya Janata Party (BJP), gained ascendancy. This party has rightist leanings and has the strong support of the Hindu majority in the country. The Congress has always stood for a secular India, where people of all faiths coexist together. Mahatma Gandhi, always believed in a multi-religious society where Hindus, Muslims, Christians, etc., would prosper.

The disenchantment with the Congress led to a massive change in the balance of power in the 2014 elections. The BJP contested 427 seats and won 282. The Congress bid for 464 seats, but won a meagre 44 seats. The BJP mustered an aggregate of 336 seats along with its allies and formed the government.

Mr. Narendra Modi, the Chief Minister of one of the states, Gujarat, was capitulated to the Prime Minister’s job. He and his team had mounted a deafening decibel campaign through the media like press, TV, radio, digital, etc., to paint the Congress as a dynastic party riled by family princes and steeped in corruption. The Congress media managers were sluggish in deploying new social and digital platforms for mass communications. The new Prime Minister Mr. Modi had promised munificently to the poor Indian voters: 100 smart cities, a million jobs every month, “Make in India” foreign investments, free housing for the poor, a return of foreign moneys stashed abroad by rich Indians, etc. His catchphrase was “Acche Din Aayenge” (Good days will come).

Sadly, after five years, the good days have not arrived. Most of the promises are yet pending. It is widely accepted that the currency demonetization in 2017 was an unmitigated economic disaster that led to utter misery, unemployment, loss of livelihoods and cost lives of 106 poor people waiting to withdraw their own monies from their banks. The Goods and Service Tax was poorly executed with small businesses struggling for months to submit their taxes online.

The infrastructure in urban areas is tattered. Mumbai city has had three bridge collapses in the last two years. The largest airline in the country, Jet Airways, with 26 airplanes and 20,000 employees, has evaporated in the last few weeks, sending Indians scurrying back to rail travel, in this vast country.

Unemployment is at an all-time high, economic statistics dished out by the ministries are soft. The country is being fractured through divisive politics. The promised 100 smart cities, are not even in blueprint formats. Moreover, Mr. Modi is also known to act on his own without adequate cabinet consultation. It is widely reported in the Indian press, that he took an important economic decision like demonetization of the currency without consulting the Finance Minister. Mr. Shatrughan Sinha, a movie star and a former Member of Parliament of the BJP, who has now defected to the Congress, christened the Modi government, as a “one-man show”.

Yet, there is no clear alternative before the Indian people. No opposition leader, including Rahul Gandhi, the President of the Indian National Congress, has been able to project himself as a capable leader, who can lead the world’s largest democracy. Rahul Gandhi has not managed any government portfolio, even when his party governed India between 2004 and 2014. He should have taken over a tough economic ministry and delivered results. That would have cemented his image as a delivering leader, in whom people can repose their faith and future. However, he chose to stay on the sidelines.

Moreover the opposition social media has consistently depicted him as a prince charming, who is blundering through his speeches and actions. Much of the propaganda against him was Photoshopped and contrived. However, Rahul Gandhi did not fight the campaign actively enough. Thus, quite a few people in the country do not take his candidature and leadership seriously.

Rahul Gandhi has been a reluctant enrollment in Indian politics. His grandmother, Prime Minister Mrs. Indira Gandhi was assassinated in 1984 and his father Prime Minister Mr. Rajiv Gandhi was assassinated in 1991. In some private moments, he may wonder whether public life is worth it. Increasingly public life is becoming a 24/7 commitment, constant media scrutiny and little gratitude at the end of the journey.

Thus, the Indian Prime Minister Mr. Modi’s image and cult is strong and larger than life, principally because, there is no clear alternative before the Indians.

As the elections approach in India, all parties are chucking discretion to the winds, and deploying every gimmick to seek votes. The contest to outdo each other in making promises of a wonderful new India, is almost mortifying. Mr. Rahul Gandhi, leader of the opposition Congress, is promising a minimum income guarantee of Rs. 72,000 (USD 1,030) per annum, to the bottom 20 per cent of poor Indians. Prime Minister Modi has also promised an annual dole of Rs. 6,000 (USD 86) per annum to marginal farmers.

The key question is: from where will the money come to make these large pay-outs annually? The job of the government should be to create employment, foster business and industry so that people work and make a living and a career. Political parties are promising the moon to the voters, just to seek votes.

Tax collections are a mere 16.5 per cent of the GDP of India. So how will the country fund all these election extravaganzas? We will have an era of fiscal deficits, which will nurture inflation. Free monies or doles, only make people lazy and inefficient.

As an ordinary citizen, I have paid my taxes faithfully for the last 45 years, but have never received any medical assistance, unemployment allowance or pension from the government, whenever I need these. Such is the life of the middle classes in India.

So Modi seems powerful purely because the opposition cannot position a strong leader, who is intellectually able and street-smart enough, to sway the masses with the right appeals and rhetoric. Herein lies India’s tragedy.

In the ensuing elections it is widely expected that the BJP, which had failed to deliver its many promises, may drop from 282 seat to about 200-225. This would deprive the party of the simple majority that it had in 2014, when it needed no allies to form a government. The Congress under the more strident leadership of Rahul Gandhi and the growing disillusionment of the BJP may augment its tally of seats from 44 to about 90. Thus no leading party like the BJP or the Congress, will be able to form a government on its own.

This has an almost ominous undertone. It means that about half of India has more faith in local, linguistic, regional parties than the two mainstream parties. This regional empowerment may prevent the two national parties from forming governments on their own in the future. However it also underscores the trend amongst the various regions in the country, to think locally and not nationally.

So, the regional parties may decide who will rule the world’s largest democracy from 23 May, 2019. In all probability it will be the BJP who will club a coalition with its allies to form the government. However, the BJP is unlikely to have a simple majority and will depend on its allies to survive.

Eventually all elections are about values and how people wish to be governed. So, it is also likely the Indian voters in their collective wisdom may vote for a major metamorphosis, as they did in 2004 when the Congress came to power and in 2014 when the BJP seized the reins. So whosoever is the Prime Minister, he or she may have to listen to cabinet colleagues, the people and take them into confidence. In the ultimate analysis, no country is the private property of any leader. And leadership too, has to be earned. Daily.

Aneja, an alumnus of the Harvard Business School, was the Managing Director of Unilever Tanzania. He is the author of a book, “Agenda for a New India.”