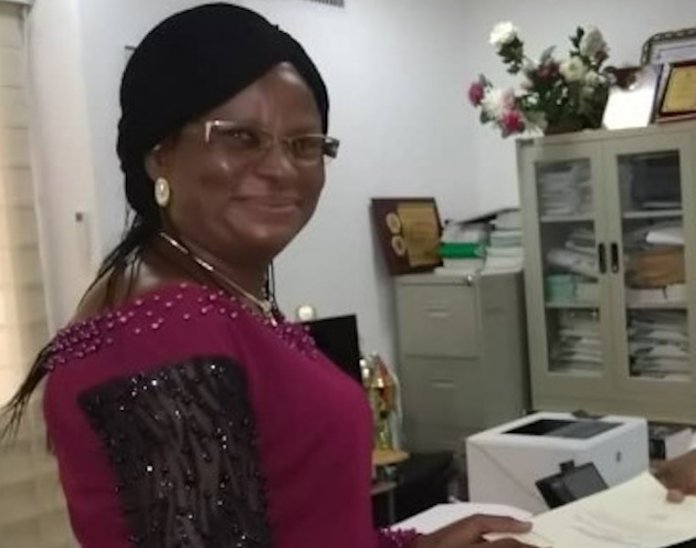 For the first time in its 38 years of existence, a female Rector, Dr. Francisca Nwafulugo was recently appointed at the Federal Polytechnic, Oko, Anambra State by President Muhammadu Buhari. Amidst jubilation by members of the polytechnic community, she has set to work to expand the frontiers of the institution in the areas of academics, innovations, creativity, ICT, entrepreneurship and infrastructural development. Uchechukwu Nnaike reports

The entire academic community of the Federal Polytechnic, Oko, Anambra State recently turned out in large number at the Convocation Arena to witness the inauguration of the first female Rector of the 38-year-old institution, Dr. Francisca Nwafulugo, who was appointed by President Muhammadu Buhari.

Nwafulugo, an engineer, whose appointment took effect from February 4, has lectured for 26 years at the Kaduna Polytechnic. She was the Chairperson, Association of Professional Women Engineers of Nigeria (APWEN), a division of the Nigeria Society of Engineers (NSE), Kaduna chapter and a member of many other professional bodies.

Prior to her appointment, Dr. Izuchukwu Onu was the acting Rector after the expiration of the eight-year tenure of the former Rector, Prof. Godwin Onu. Given the limitation of power exercised by an acting rector, staff and students had waited anxiously for the arrival of a substantive head of the institution.

A chemical engineer by profession and chief lecturer at Kaduna Polytechnic, Nwafulugo set a new record in the history of Oko Poly when she defeated other contestants for the leadership of the institution.

At her inauguration attended by members of the dissolved governing council, chief lecturers, union leaders, stakeholders, staff and students, the rector called for peace and unity in the polytechnic, stressing that the era of vendetta and bickering has ended. She urged all aggrieved staff to purge their hearts of bitterness and begin a new journey of transformation in the institution.

She explained that no sustainable development can be made in an atmosphere of rancour and industrial strife and appealed to warring factions to lay down their arms and embrace the wind of change.

Nwafulugo further unveiled her vision for the institution, saying, “I want to see this polytechnic attain new heights in the fields of academics, innovations, creativity, ICT, entrepreneurship and infrastructural development. This administration will create a conducive academic environment which will enhance quality teaching and learning, thereby producing graduates that would positively impact the nation and the world at large.”

She said her work plan for the institution entails staff training, welfare and academic research for intellectual development. She also rolled out other plans to promote science education, technology and infrastructure that would benchmark the standard of reputable institutions in the world.

To acquaint herself with the academic environment, Nwafulugo visited the traditional ruler of Oko Community, Prof. Laz Ekwueme, where she solicited his royal blessings and support towards the development of the institution. She also hosted the daughters of Oko (Umuada Oko) as key stakeholders in forging an amicable relationship with the polytechnic.

Addressing the Igwe in council, the rector said, “I have come to seek your support to take the Federal Polytechnic, Oko to the next level. I have come with a lot of plans, but this requires all hands on deck to make this dream come true. Women are pillars of our homes and I will bring my experience in the polytechnic system to bear to ensure that the institution becomes the envy of all.”

Responding, Ekwueme congratulated the rector on her appointment and promised to support her administration to achieve its set goals. He also call on the government to urgently consider upgrading the polytechnic to a full-fledged university, adding that the institution has all that is required for a smooth take-off. He expressed hope that the new administration would be more impactful, given the pedigree of the new rector.

With her 26 years work experience in the polytechnic sector, Nwafulugo said she knows the terrain quite well, adding that her deep understanding of the prospects, problems and challenges of the polytechnic sector has placed her on a vantage position to reposition the institution. She promised to invest her wealth of academic and leadership experience in the development of the institution.

Few weeks after her inauguration, the rector embarked on a tour of the various departments and units, where she interacted with heads of departments, coordinators, and heads of various units. She said the facility tour gave her the first-hand knowledge of critical areas that need immediate attention.

Nwafulugo said the facility tour also afforded her on-the-spot assessment of the institution, starting from the departmental level, and promised immediate action to address the challenges. One of the critical interventions of her administration was the renovation of students’ classrooms and lecture halls. She said the renovation was geared towards raising all students’ classrooms and lecture halls in the polytechnic to acceptable standard.

To improve power supply in the institution, the rector ordered the immediate installation of transformers which have been lying uninstalled. She also directed the reactivation of streetlights in key areas on campus to encourage security and enable students move about freely on campus. She warned that her administration would not tolerate wastage of government facilities, saying that various ongoing projects must be completed in record time.

Work has also commenced at the main gate of the institution to enhance its aesthetic quality and free flow of traffic. The work includes designing of a new name plate for the institution, revamping of the water fountain and beautification of the entire school premises.

The rector promised to diversify the Internally Generated Revenue (IGR) base of the college and reduce sole dependence on government funding. She said she has commenced discussions with reputable institutions to explore viable sources of revenue for the institution.

Also, Nwafulugo expressed concern over the lack of recreational facilities on campus, saying that her administration would make the necessary provision. According to her, since the polytechnic has a large youth population, a recreational centre would provide a platform for staff and students to exercise themselves and develop sporting skills for a lifetime career.

Impressed by the plans of the new rector, a lecturer in the Department of Mass Communication, Mr. Ugochukwu Onuegbu described Nwafulugo as a thorough bred scholar. He expressed optimism that she would deliver on her mandate of giving the polytechnic a new face.

Also speaking, a non-teaching staff of the institution, Ifeoma Okoye said the rector has a clear vision of the problems affecting the institution and expressed hope that her administration would be a blessing to the polytechnic.

The Senior Staff Association of Nigerian Polytechnics (SSANIP) Federal Polytechnic Oko chapter congratulated the new rector on her appointment and pledged to continually partner the management to move the institution forward.

The Chairman, Innocent Okeke expressed hope that the new rector would make the entire staff and students of the polytechnic the centre of her policy initiatives and actions.

While setting agenda for the new leadership, he said: “Her administration must be seen to be people-oriented and do everything within the law to be the voice of the voiceless in this institution. She must divest herself of petty politics of religion, ethnicity and gender. Also, rumour mongers and pretenders are the real enemies of any administration. We wish her tremendous success in all its ramifications.”

The newly elected Chapter Chairman of the Academic Staff Union of Polytechnics (ASUP), Signor Igbokwe, in a chat said the union’s expectations are high on the new leadership.

He urged the new rector to create an enabling environment that will help her work maximally, as well as to avoid sycophants that are already positioned to run others down. He also advised her to be union-friendly.

“A woman rector is good to have at this time in the polytechnic to unite all divides. Her coming will bring more progress and success,” he stated.

Also, the immediate past ASUP Chairman of the institution, Godson Okeoma urged the new rector to bring in innovations, adherence to due process and restoration of the lost glory of the polytechnic. He urged her to set machinery in motion to ensure successful accreditation of abandoned programmes; introduction of new courses and restoration of quality academics that the institution was known for.

“I expect to see the evidence that women can equally do it and even better. I expect a record that will outweigh what Dr. Njoku did at Federal Polytechnic, Nekede, Owerri. I expect good tidings instead of stories of woes at the end of her tenure.”

The immediate past spokesman of the ASUP, Kossy Ebunilo, said the polytechnic community is optimistic that the new rector would exceed other rectors in performance. He noted that her keen insight in the polytechnic system would be an advantage.

“Based on your strong roots in the polytechnic system, the sky is your limit. Our confidence in your ability to deliver in all fronts is therefore not misplaced,” he said.

The Bursars’ Association of Polytechnics and Colleges of Technology expressed delight with her appointment, describing it as a reward for years of hard work and determination. The association urged her to take the polytechnic to an enviable height with her experience as an astute engineer and academic.

Also, the Rector, Federal Polytechnic, Nekede, Dr. Michael Arimanwa, said the appointment was a reward of her innumerable contributions in the education sector.

“Your emergence as the rector of this great institution shows that the records of your achievements as a dogged engineer and educationalist are of note.”

With the pace of work already demonstrated by the new rector, students of the institution have expressed hope that the new administration would deliver on its vision of making the polytechnic an institution of first choice in the country.