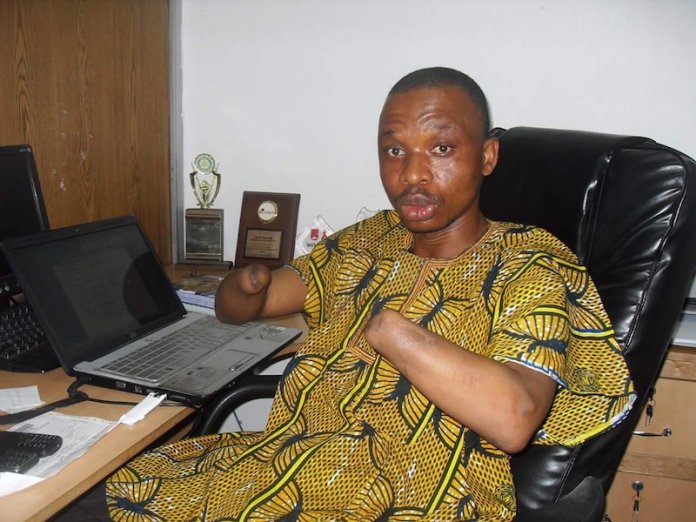 Gbenga Ogundare writes that Nigeria’s slack tax system poses a threat to the attainment of the eighth Sustainable Development Goals,

which covers minorities like People Living With Disabilities and seeks to ‘promote sustained, inclusive and sustainable economic growth, full and productive employment and decent work for all’

Nigeria, with no fewer than 20 million people damaged one way or the other, has yet to fully include this minority in its public spending—how much less floating a special tax regime to raise fund for their welfare.

On the other hand, in climes where inclusion matters in governance, tax credits to fund the welfare of Persons Living With Disabilities(PLWDs) are being proposed, and policy makers are taking a long hard look at them.

North America first: Canada, years ago, introduced the Disability Tax Credit to shore up its disability welfare fund—for its 500,000 PLWDs—to above a billion dollars. Even if it seemed a political move of the government at that time, Australia, too, proposed a disability tax in 2013. The policy meant to kick in by 2014 was expected to raise over $3 billion (Au)by increasing a compulsory health insurance levy from 1.5 per cent of personal income to two percent. The country has around 410,000 PLWDs.

But Nigeria, with no fewer than 20 million people damaged one way or the other, has yet to fully include this minority in its public spending—how much less floating a special tax regime to raise funds for their welfare.

Funding has always been the excuse. And the government will sing it out louder in these trying times as Nigeria’s oil fortunes dwindle, and its economic handlers flounder in uncertainty.

The world’s sixth largest oil exporter earned N207 billion from crude oil and gas export in the first half of 2018. This fell short of the N661.4 billion the federal government targeted.

These disappearing revenues threaten a lot of things, the most important being the eighth goal of the Sustainable Development Goals (SDG), which covers minorities like the PLWDs, and seeks to “promote sustained, inclusive and sustainable economic growth, full and productive employment and decent work for all.”

Tax revenue thus remains one of the sources to look to—in order to tide the nation’s 200 million plus citizens over the storm.

Goal 17 of the SDG addresses this: Strengthening the means of implementation and revitalising the Global Partnership for Sustainable Development. The first clause specifies the means: Strengthening domestic resource mobilisation, including through international support to developing countries, to improve domestic capacity for tax and other revenue collection.

Across all development, economic, and financial institutions working to save the world’s poor, taxation has been identified as one reliable means to oil the wheel of the global development agenda.

“Funding the SDGs is an economic and ethical imperative with major implications for taxation. Countries themselves need to raise more revenue in an equitable way,” IMF Managing Director Christine Lagarde said during the February 2018 Organisation for Economic Co-operation and Development(OECD) meeting in New York.

“And the entire international community needs to eradicate tax evasion and tax avoidance.”

Tax avoidance and evasion plague developing economies where their tax-GDP ratio is low—compared to the developed economies.

In 2016, global consulting firm PwC said in theJune edition of its Tax Watch that Nigeria earned N5.5 trillion ($27 billion) from taxation in 2015.“South Africa with a smaller economy and only about one-third the Nigeria’s population collected twice as much R808 billion (about US$57 bn) in taxes alone,” the report stated.

The difference is clear: 40 million, out of the 70million active citizens in Nigeria, said former Finance Minister Kemi Adeosun, pay taxes. And the 30 million tax dodgers cut across the rich and the poor. This shenanigan mirrors the tax situation in Africa, a situation not exactly bad, some international tax watchers say.

“Governments committed to expanding revenue collection, including through income taxes, have sometimes seen large gains,” researchers from the International Centre for Tax and Development (ICTD) stated.

They cited the Rwanda and Ethiopia success stories. “In individual cases, governments have been able to mobilisepopular support for new taxation by linking it more explicitly to benefits, for example in Sierra Leone and Nigeria.”

The Nigerian authorities won’t celebrate this research finding, though. The reality is starkly different. As at December 2017, only 943 Nigerians paid self-assessed taxes of less than N1 million, according to Vice President Yemi Osinbajo while addressing a gathering of members of the Chartered Institute of Taxation in Nigeria recently.

A partner with Deloitte & Touche Nigeria, Oluseye Arowolo, also revealed that of the 14 million registered personal income taxpayers, just 214 Nigerians pay up to N20 million as annual tax; 914 people pay up to N10 million. And according to the Corporate Affairs Commission (CAC), there are just 2.5 million tax-registered corporates out of the 30 million on the CAC list.

Worse, the 214 in the tax upper crust live in Lagos where just five million of the taxable nine million pay taxes, the state internal revenue service said. Ninety per cent of the tax payers are from the Organised Private Sector (OPS) and public servants while 10 per cent are from the informal sector in the state. The Joint Tax Board stated that Lagos raked in 40 per cent of the N684 billion the 36 states of the federation took in in 2015.

At least 46 per cent of Nigeria’s 10-million registered personal-income taxpayers, said the National Bureau of Statistics, lived in the state.

But this is not in praise of the Lagos elite. They could have done more, and declared higher than N20 million each, annually, considering the sheer number of the rich cocooned in the most populated city on the continent.

In a report by AfrAsia Bank and New World Wealth in 2017, Lagos warehouses$120 billion of Africa’s wealth. No fewer than four dollar-rich billionaires, 360 multi-millionaires, and 6,800 millionaires live in the city. Yet just over 200 of these moneybags remit about N20 million each, yearly, and just over 900 pay N1 million each every year.

Injustice against the Poor

It has actually been discovered the tax system is rigged against the poor in developing countries, thanks to the games the elite play in shaping politics of tax and its collection.

In Africa, the ICTD says, taxation of the wealthy remains ineffective. “The overall collection of income and property taxes is a fraction of levies on the OECD countries,” the group’s findings reveal.

“Taxation of professional incomes and capital gains are often almost negligible; corporations benefit from poorly monitored tax exemptions, and so on.”

In Nigeria in particular, the wealthy declare just single sources of income, when they have streams of multiple incomes hidden from the tax man.

“They are only taxed through the PAYE,” said Adeosun. “Yet, they earn so much from part-time jobs, and extra businesses.” These artful dodgers include the nerds in online businesses, entrepreneurs, Nollywood’s big earners, and others.

In the enforcement, the injustice is also obvious. “There is growing evidence that much of the cost of poor enforcement of taxes on the rich falls on the poor,” the ICTD says.

That happens through fragmented subnational taxes, formal and informal user fees, reliance on community associations for services, and the broad reach of informal taxation—all borne by the have-nots, including the PLWDs.

The PLWDs are not grumbling about paying taxes, anyway. “There’s nothing wrong in paying taxes as disabled persons,” said Tunde Muhammed, chairman of the Nigeria Association of the Blind, Lagos.

“It helps any disabled person paying his tax to stand up and insist on exercising his rights.”

Muhammed’s only worry is what he sees as the fundamental problem in government approach to disability in Nigeria. And he believes this approach makes the minority objectives of the SDG a tall dream—tax or no tax.

“Local laws that should promote and protect the PLWD’s right to inclusive development are not there in the first place,” he said.

David Anyaele, Executive Director of the Centre for Citizens with Disabilities, also pays his tax, though he thinks the PLWDs should be shielded from tax because the government has no plan for their welfare. But he agrees with Muhammed on one point: The problem goes beyond tax justice.

“It is about deliberate state policy to include and ensure no one is left behind in development,” he said.

Lack of good tax policies actually spawns the problem of the rich gaming the tax system at the expense of the poor. And that laxity permits just any smart alec, including multinationals, to also bend the tax rule, says Adewale Adeduntan, Social Mobilisation Manager at Actionaid Nigeria.

Adeduntan isn’t exactly wrong. Between 2005 and 2015, capital gains tax unremitted by some oil giants that bought the federal government assets stood at $270 million, according to a report.

The Impact of non-payment of Capital Gains Tax (CGT) and other Levies in the Oil and Gas Sector on the Socio-Economic Development of the Country, a report by the Socio Economic Rights and Accountability Project (SERAP), reveals that this failure has bogged Nigerians deeper into poverty and under-development.

This perceived injustice is not without its effect. The informal sector, which the Central Bank of Nigeria says contributes 48 per cent of Nigeria’s over $500 billion GDP, has no trust in the tax system. And the 36 million mom-and pops, (out of the 37 million businesses in Nigeria) employing over 60 million people, will do everything to blow off tax collectors.

And according to Adeduntan of the Actionaid Nigeria, it’s a loss that must be stopped in the effort to fund development.

The race for the SDG medals is actually spurring on responsible governments. No doubt, funds will determine how far a nation will go. But with shrinking government revenues in resource-dependent economies like Nigeria where oil generates 61 per cent of government revenues, attention has to shift to taxation.

And the administration of revenue so gleaned, just and equitable, will only create responsible taxpayers engaging an accountable government for an inclusive society.