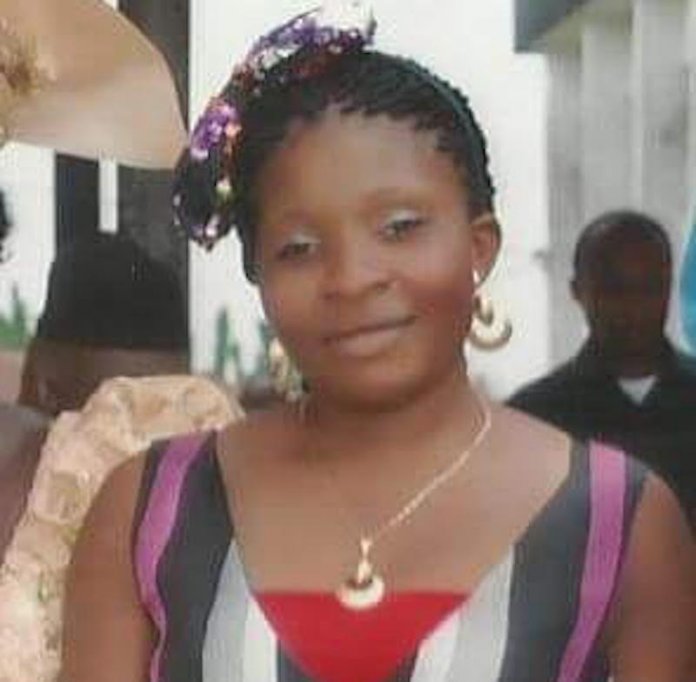 The family of late (Mrs.) Regina Iheanacho, who was allegedly murdered by her husband, Nkem Ihenacho, has approached an Ikeja High Court of  Lagos State, seeking an order to compel the deceased’s husband to pay them the sum of N100 million as general damages for the  death of their daughter.

Her corpse has since then been deposited in the mortuary till date while the husband, a brother to the former Minister of Interior, Capt. Emmanuel Iheanacho (Rtd) and staff of Genesis Worldwide Shipping was sentenced to 15 years imprisonment for involuntary manslaughter after four years of trial and is still serving jail term in Ikoyi Prison, Lagos.

Vexed over the alleged insensitivity and disregard by the Ihenaecho family over their loss, the bereaved family had  through their counsel, Onwu Ekowa, Udoh & Co., berated them for abandoning her corpse in the mortuary for six years now.

Consequently, joined as respondents alongside Nkem Ihenacho in the suit marked Temp/42473/19, are, his uncle, Captain Emmanuel Iheanacho and his company, Genesis Worldwide Shipping, where the deceased husband worked when the incident occurred.

The demand vis-à-vis compensation charge which was filed at the Lagos High Court, Ikeja, recently, a copy which was made available to THISDAY in Lagos, stated, “The brutal murder of Regina Iheanacho by her husband for no just cause, and for no reason whatsoever, is most reckless, inhumane, barbaric, illegal, unlawful and unconstitutional, and thus constitutes a crass flagrant, colossal and total breach of the deceased’s right of life, dignity of human person, right to fair hearing, private and family life and right to freedom of movement enshrined and guaranteed in Sections 33,34,36, 37 and 41 of the Constitution of the Federal Republic of Nigeria 1999 (as amended), the African Charter on Human and Peoples rights and the fundamental Right (Enforcement Procedure) Rules 2009, and thus a breach of the family rights to private and family life”.

A statement of affidavit in support of the matter in the same suit by the family of the deceased, stated that the conduct of the husband in killing his wife was confirmed by the police in Lagos and was found guilty in the court in Suit No: LCD/337/2013, adding that, “even after the husband has been found guilty of killing his wife, he and his brother, Capt. Emmanuel Iheanacho are still undisturbed about the corpse of his wife which has been  abandoned in the mortuary since on the April 25, 2013 till today without any arrangement for her burial, notwithstanding that she has three children for the husband.

The deceased’s family also alleged that since April 24, 2013, the Iheanacho’s whose brother killed someone’s daughter have not visited the deceased family to inform them about her death.

The deceased’s family represented by Chief Etubom Samson and Mr. Inyang James Nyoh, the deceased’s father, in a fundamental rights enforcement suit filed before the court by their lawyer, Mr. Silas Udoh, also wants the court to declare that murder of the deceased constitutes an unwarranted and unprecedented abuse, an absurd and sobering violation of the Constitutionally and Statutorily guaranteed rights; and a breach of the applicants’ right to dignity of human person. right to fair hearing right to private and family life and right to life of the applicant‘s daughter.

The deceased’s family in an affidavit deposed to by Chief Etubom Samson, averred that he is familiar with the facts of this case, having being the person that handled this matter from the police station to the Magistrate’s Court and up to judgement at the High Court.

Samson averred that the deceased had three children for the husband and that despite this, she was being subjecting to all manner of inhuman treatment, humiliation and degradation including restriction of access to her family members.

Samson further stated that the climax of this inhumanity occurred on April 24, 2013 when the husband beat the deceased whom he claimed to be his wife and mother of his three children mercilessly, and ignored all her dying pleas to take her to the hospital after the beating till she defecated on herself twice before she died.

He further said neither the deceased’s husband nor any member of his family made any effort to provide any medical attention to the deceased, but left her throughout the night to die from the pains and severe injuries she sustained from the beating, which was the constant habit  even on the day he beat her with a wire cable till she died.

He revealed further that the conduct of Nkem  Ihenacho in killing the deceased was confirmed by the police and was found guilty by the court in Suit No. LCD 337 2013. The State of Lagos and Ihenacho Nkem.

Samson also stated that the deceased’s family has no money to pay for the six years mortuary bill which is now N1, 500,000 and the expenses of conveying the corpse to Akwa lbom State together with burial rites which is about N5, 000,000.

He added that the deceased’s family is heavily indebted to people right now because of the expenses on the case, while their in-laws have abdicated their responsibilities.

Samson also stated that they have lost all the resources invested on the deceased in terms of clothing, medical care, education from her birth till a mature age when the Ihenachos took her away from the family in 2012, which expenses amounted to N50,000,000, adding that they  deserve to be compensated.

Speaking with THISDAY in his office last week, counsel  to the deceased’s family, said the family of late Regina are so worried and need the compensation to enable them remove the corpse of their daughter to bury as it has overstayed in the mortuary.

“They called Chief Etubom Samson and I, who have been on top of the matter to file the case so that when all parties agree, the burial rites of Regina could commence.

We have started the process and want to see the outcome, which I know will be positive”, Udoh said.

Meanwhile, no date has been fixed for the hearing of the matter, as it is is yet to be assigned to any judge as at the time THISDAY went to press.