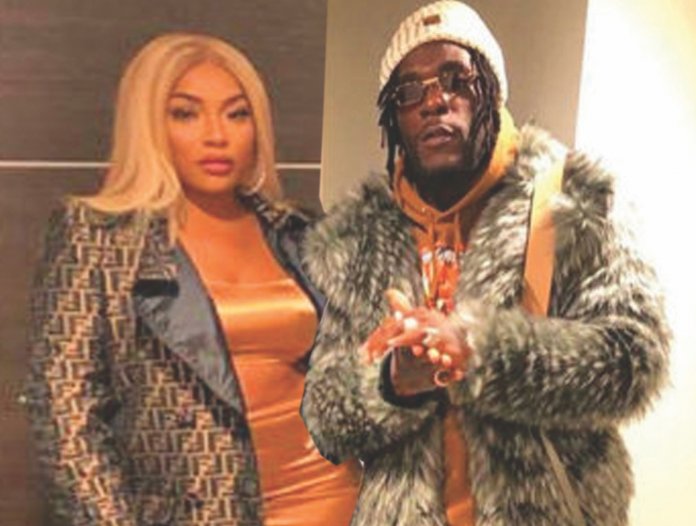 Weeks after making their romance public to the delight of their fans, artiste Damini Ogulu aka Burna Boy, and his girlfriend, British-Jamaican rapper Stefflon Don have remained a trending topic. In a recent interview on the ‘Beats1’ show on Hot 97 FM in the United States of America, the Nigerian music star said this about his love interest when asked by the show host to clarify their relationship status. “On a more serious note, that’s my wifey. If you wanted a wifey, she’s like the most perfect person with that perfect description. Unfortunately, she’s mine now…”

The Afro-fusion singer and songwriter had earlier taken to his Instagram stories to call her ‘wifey’ while commending her on becoming the 3rd best-selling female rapper in 2019. Sharing a post of the current selling female rappers with his sweetheart listed among Cardi B and Nicki Minaj, he wrote: ‘Wifey not playing with no one out here. Going #1 This year. Proud AF.’ Stefflon Don (real name Stephanie Victoria Allen) was ranked third with a million records sales.

She appeared behind Nicki Minaj and Cardi B who are in the second and first positions with five and eight million records respectively. Stefflon and Burna confirmed their romance with a steamy kiss in new footage that recently surfaced online. In February, the British-Jamaica singer and songwriter, Stefflon had addressed her relationship status with the Nigerian artiste after a video of them appeared on the internet. “Relax guys he ain’t hit yet, but that’s bae,” she wrote.

The nine seconds video of them getting cozy was posted by the Nigerian dancehall artiste who has become a UK favourite. In the footage, Stefflon who was featured in a remix of Mariah Carey’s ‘A No No’ released March 15, 2019, was seen lying on his body sleeping while he filmed the video. After the video surfaced online, a music critic on Twitter throwback when Stefflon Don revealed she was in love and dating a Nigerian but didn’t mention names then.

Events following their romance have shown healthy moments and gestures of both lovers appearing healthy. There’s been a valentine exchange of gifts which appears Burna’s first experience of such and then the British rapper describing herself as a ‘lover girl’ that soaks in tears when she leaves him after a stay. According to her tweets; “Nothing about him is small…I actually cried when I had to leave him….like who does that?! Me….”

Though it’s been argued that with Stefflon Don, Burna Boy, 27, seems to be revealing a vulnerability that has been surprising. On the other hand however, a few had expressed reservation about how mushy Stefflon has gotten over time with the romance due to her tough girl persona that she has often displayed in the past. Though, sometime in November last year, it was reported that American singer Drake hit up Stefflon Don on Instagram live and asked her out on a date. The British rapper was reported to have said yes and days later they were both spotted out together.

Well known for her single, “Hurtin’ Me”, featuring French Montana, which peaked at number 7 on the UK Singles Chart, Stefflon in 2016 released her debut mix tape Real Ting, followed by another mix tape, Secure, in 2018. The 27-year-old won Best Female at the 2017 Mobo Awards and narrowly lost out to Jorja Smith in the 2018 Brits Critics’ Choice category. Don put herself on the UK music map with a series of remixes and cameos, rising to fame in 2015 with her take on Lady Leshurr’s #LUKATAR and a gender-flipped version of Section Boyz’s Lock Arff.

Real Ting shares a name with her debut mix tape, which dropped a month later after a year of steadily increasing hype around the then blue-haired artiste. Real Ting went to number four on the iTunes hip-hop chart after being streamed over three million times in the first month of its release. True to her word, the mix tape sees Allen switching between sensual abashment (Tight Nooki), fierce rap (16 Shots) and smooth RnB (Gangsta), including Jeremih, Donae’o and Abra Cadabra as featured guests.

For the former Aristocrat Record artiste, Burna Boy who had a career-defining run in 2018 has made the UK music chart with ‘Location,’ a piece off the debut album of Dave, UK based Nigerian rapper, titled ‘Psychodrama’ – which entered as number one in last week’s official albums chart. On the Jae5 produced track, Burna Boy and Dave can be heard bragging about their success and the attention they get from ladies, seeking the location of their latest interest.

The afro-fusion singer continues with his fire streak after kick-starting 2019 with two tracks – ‘Dangote’ and the Zlatan-assisted ‘Killin Dem’ – which are dominating the Nigerian airwaves. Burna is gearing up for his “African Giant” tour and it has an exciting lineup. A couple of months ago, it was announced that Burna Boy will be performing at Coachella 2019 and the music star called out the organizers for putting his name in small print.

The ‘Ye’ crooner rose to prominence in 2012 after releasing the lead single “Like to Party” from his debut studio album, L.I.F.E in 2013. Currently, Burna Boy is considered one of the biggest artistes from Africa with impressive streaming numbers across Spotify, Apple Music, Deezer and Youtube, making him one of the most bankable music superstars of his generation. He rightly stated that he’s an “African Giant”, hence, the name of his 2019 tour. As part of the tour, in addition to performing at Coachella, Burna Boy would be headlining a concert at the historic Apollo Theatre in New York.

The event is set to hold on the 5th of April. Apollo Theatre, which was opened in 1914 and rebranded in 1934, is a noted venue for African-American performers. With this, Burna Boy joins an impressive list of artistes that have performed at the theatre, including Aretha Franklin, James Brown, Michael Jackson, The Supremes, Stevie Wonder, Marvin Gaye, Elton John, Smokey Robinson, Gladys Knight, The Pips, The Jacksons, Quincy Jones, Chaka Khan, Patti LaBelle, D’Angelo and Prince.