Ibrahim Shuaibu writes that despite a couple of incidents of violence, the supplementary governorship election in Kano, won by incumbent Governor Abdullahi Ganduje was well-managed by security agencies

The announcement of the result and the peaceful atmosphere recorded in all the areas of the state buries the uncertainty that rocked the mind of many people who anticipated crises after the supplementary election.

The supplementary election was the first of its kind in the history of governorship election in Kano.

The election was a serious battle between Governor Abdullahi Umar Ganduje of the All Progressive Congress (APC) and Abba Kabir Yusuf of the Peoples Democratic Party (PDP).

At the end of the day, Governor Ganduje was declared winner of the governorship election. Ganduje, defeated his closest rival, Yusuf.

On the eve of the supplementary election, some thugs wielding weapons dispersed electorates at Suntulma Gama Primary School in Nassarawa local government area.

The thugs brandished dangerous weapons freely and dispersed the electorates including journalists on election coverage.

Before the declaring the result, representatives of the PDP walked out of the collation room. Chairman of the party in the state, Rabiu Suleiman Bichi described the result as sham and rejected it.

Aliyu Sani Madakin Gini, a serving PDP member of the House of Representatives called on the Independent National Electoral Commission (INEC) to cancel the results from Nasarawa LGA in the supplementary election because it was marred by violence and intimidation of voters.

“INEC cannot be fair if it declares a doctored result when Gama ward result was cancelled due to violence in the last election and now accepted amidst the same violence in the rerun election,” Gini said.

Also, the Collation Officer representing All Peoples Party (APP) Hon. Fatima Abubakar Abdullahi, complained that no election took place at Kibiya local government area, one of the affected LGAs, but INEC received and collated results from the area.

She insisted that the rerun election was not free and fair and should be cancelled.

The state returning officer, Professor Bello Shehu, said Ganduje of APC scored 1,033,695 to defeat the candidate of the PDP Yusuf who scored 1,024,713.

Shehu added that the margin of votes was 8,982, while a total of 50,861 votes were rejected in the exercise due to violence and over-voting.

The atmosphere at the collation centre became heated as agents of some parties including the PDP wanted INEC to address the irregularities that marred the election before declaring the result, but the electoral umpire declined their request.

On the side of the security agencies, the Deputy Inspector General of Police in charge of the rerun election in Kano, Mr. Anthony Agbizili Micheal dismissed allegations that the police aided thugs in molesting voters to favour the APC.

“If thugs have taken over any polling units, INEC will not feel comfortable to bring out their materials and conduct the voting process. It was a secret ballot so we didn’t know which party they voted for. The police was never involved in the conduct of the election but in providing security for its smooth conduct. To accuse the police of complicity, is unfair” the DIG stated.

Agbizili was deployed to the state to take charge of the supplementary election, prompting the PDP to become suspicious over the role played by the police in the election. The police dismissed as baseless rumours that some people were killed during the election. He announced the arrest of 10 people for trying to disrupt the process.
The former Governor of Kano state, Senator Rabiu Musa Kwankwaso has called on INEC to conduct fresh re-run elections in the state, saying there was no elections in Kano state.

Kwankwaso, who spoke at his residence condemned the alleged role of the police under the command of Agbizili, who he accused of providing back-up for armed thugs to perpetrate violence and massive rigging.

He said the widespread violence and rigging of the supplementary polls took place in all the 28 local governments that the rerun took place.

“There are very few places where elections took place. In the city, there was no election because they were overtaken by thugs. People were going round with ballot papers and result sheets, writing what they wanted and submitted them to the INEC officials.

“Our prayer is that this elections should be canceled and re-scheduled so that we can have a better, free and fair elections in Kano. It is unacceptable,” Kwankwaso said.

The Senator representing Kano North on the platform of the APC, Barau Jibrin argued that the process of the collation should be respected by the PDP saying all complaints of irregularities should have been addressed at the polling units and wards not at the state collation centre where final submitted results were collated.

He added, “Whosoever is not satisfied with the result should seek redress at the Election Tribunal.”

The Acting Chairman of the PDP, Rabiu Suleiman Bichi insisted that there was no election in Gama ward.

The party rejected the declaration of Governor Abdullahi Umar Ganduje as winner of the Kano governorship poll.

Bichi who was also an agent of the PDP at the collation centre frowned at the exercise, describing it as a shame on democracy. He addressed journalists immediately after INEC declared Ganduje re-elected, saying the party was not satisfied with the outcome of the rerun in Gama, Nassarawa and Dala councils.

He accused INEC of encouraging thuggery, violence and irregularities which violated the Electoral Act.

The PDP leader and close associate of Kwankwaso also accused security operatives of abating multiple voting across the polling units. He insisted that the heinous crimes were perpetrated under the watchful eyes of the security men at the centres.

Rabiu also lamented that the results were doctored, mutilated and signed by APC agents.

Also reacting, Chairman of APC in Kano, Prince Abdullahi Abbas described the outcome of the election as a landmark victory to the people of Kano.

Election observers, however, called on INEC to work with the Nigeria police to investigate electoral offenders and apply measures to sanction any person or group of persons found culpable.

The leader of the group, Dr. Ibrahim Baba of Center for Intervention who spoke on behalf of others, noted that any person or group of persons involved in electoral offences should be punished to serve as deterrent to others.

Baba, added that despite reports of violence and intimidation, the overall political climate in the state during the rerun election remained peaceful and conducive for the conduct of democratic elections.

“The collaborative relationship between INEC and Inter-agency Consultative Committee on Election Security (ICCS), contributed to the generally peaceful atmosphere in the state.

“We give kudos to the security agencies for maintaining the highest level of professionalism before, during and after the conduct of the supplementary election.”

The group, however, called on the winners and losers to respect the rule of law and caution their supporters to remain peaceful and law abiding.

They called on politicians to refrain from disseminating false information and channel their electoral complaints and grievances through established legal processes.

The group congratulated the people of Kano state for their, “resilience, dedication, steadfastness towards this great democratic venture.”

However, Kano Concerned Citizens Initiative (KCCI) urged aggrieved politicians to shun violence and seek legal redress so as to sustain the peace in the state.

The chairman of the group, Alhaji Bashir Othman Tofa who was presidential candidate of the defunct National Republican Convention (NRC) reiterated to reporters in Kano the need for peace in the state.

“Now that the result have been officially declared by INEC, those who experienced disappointment over the outcome should take the opportunity of the adequate windows provided by the laws to redress any type of wrong.

“We urge that those opportunities be used. There is no reason whatsoever for anybody to resort to illegalities as means of seeking redress.”

“The greater responsibility of ensuring that peace reigns in Kano lies on the shoulders of those who are declared winners. They must shun vindictiveness in whatever in whatever form.

“They must embrace all as one family and treat all as equals so as to pursue an agenda for development. They need to be magnanimous in victory.

“We acknowledge and appreciate Governor Ganduje in this regard for making a call for peace in Kano.”

He also hailed the Emir of Kano, Muhammad Sanusi II for his persistent calls for peace in Kano throughout the election period.

They also commented the good work done by security agencies, while adding that, there was a need to sustain it.

In his acceptance speech after the victory, Ganduje thanked the people of Kano for reelecting him.

“The success is not mine alone or my deputy’s, but for the entire people of Kano.

“I might have won your votes but it is you people that have won the election,” the governor stated.

He also thanked President Muhammadu Buhari for his support and promised to continue to work with him for the progress and development of the country.

Ganduje promised to do more on agricultural development, free education and women empowerment to move the state to the next level. He also called for calm and understanding among Kano citizens as he pledged to continue introducing developmental projects to the state.

However, he warned that the government will not condone trouble making and intimidation while he called on people to celebrate peacefully and embrace one another.

“Don’t mind the blackmailers, Kano is in peace” he said.

He thanked the traditional and religious leaders in the state as well as security and INEC for their roles in ensuring peaceful election. 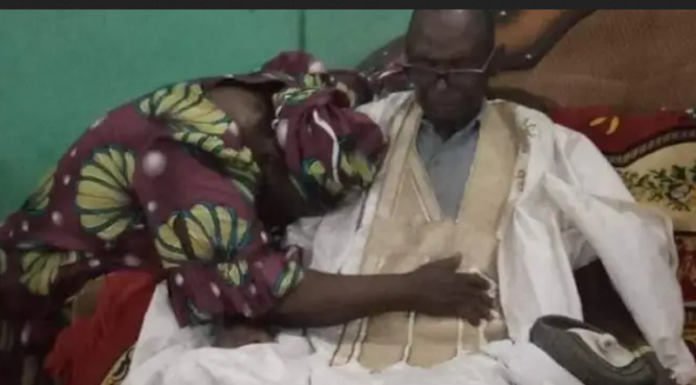