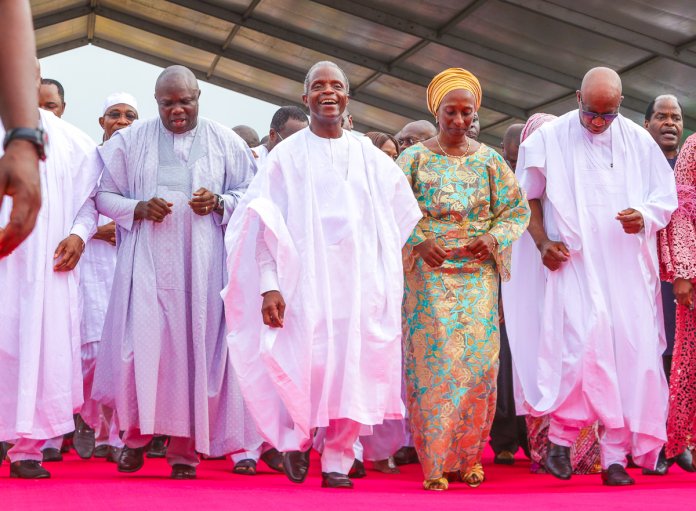 Vice President, Professor Yemi Osinbajo, yesterday went down the memory lane, describing his survival from the helicopter’s crash in Kabba, Kogi State, during the last electioneering campaign “as a product of God’s special mercy”.

Osinbajo was giving testimony at an Interdenominational Service of Praise and Thanksgiving organised for him by the Christian communities in Ogun State, held at the Obafemi Awolowo Square, Ikenne-Remo of the state.

With particular reference to his helicopter’s crash of  February 2, 2019 at Kabba, in Kogi State, the vice president, who acknowledged the omnipotence of God over his live, also reiterated that if it were not for God’s mercy, himself and other 11 occupants of the ill-fated chopper would have died in the incident.

Speaking at the event, which has in attendance, governors: Akinwunmi Ambode (Lagos), Abiola Ajimobi (Oyo); as well as the Ogun State governor-elect, Dapo Abiodun, the vice president ascribed his survival in the crash to the special mercy of God, who according to him, has seen him through ups-and-downs of life.

He offered prayers for peace, progress and stability in the country and acknowledged that God actually saw him through the rigours and hazards during campaigns in the build up to the 2019 general elections.

Speaking earlier, wife of the Vice President, Dolapo, who narrated how herself and other family members received the sad news, called on all Nigerians to continue in their prayers for President Muhammadu Buhari and Osinbajo to enable them take the country to the promise land.

In his sermon at the service,  the Archbishop of Ecclesiastical Province of Lagos, The Most Reverend Olusina Fape, said that the victory of the All Progressives Congress (APC)  at the just-concluded presidential election was because of God’s mercy.

While praying that God should see the country to the next level of greatness, Fape, added that it was God’s mercy that diverted untimely death of Osinbajo and urged him to continue to serve the God who has been merciful to him and his family.

“The election has come and gone. But it was won through the mercy of God. It is mercy that makes difference in lives of individuals. Election is not according to your power, your ability and your wisdom; election is a matter of mercy.

“Mercy does five things; it brings victory; it brings exaltation; it brings wisdom; it brings deliverance and success. Your Excellency, whatever you might have achieved is not by your power or wisdom, but by the sheer mercy of God.

“As you celebrate today, God’s mercy will catapult you to the next level according to the slogan of your party”, Fape stated.