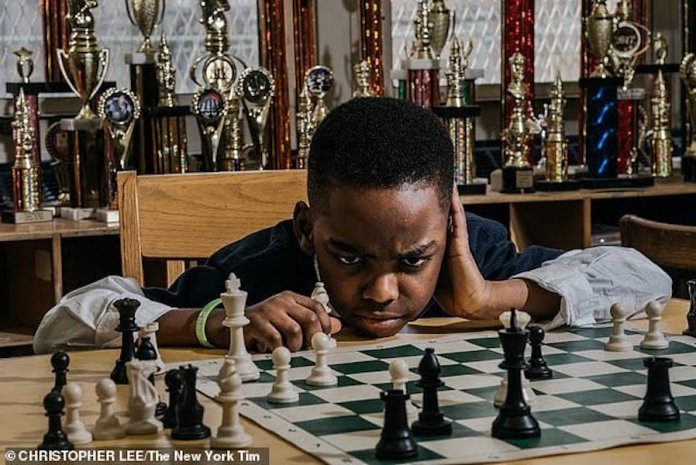 In what can well be described as a grass to grace story, 8-year-old Nigerian, Tanitoluwa Adewumi, who relocated to America with his family in 2017, has become the latest sensation in a chess championship in New York.

The brilliant little boy, who started training on the brain-tasking game barely a year ago, has surprised a lot of professional players with his latest victory.

His emergence as the winner of his category (kindergarten through third grade) at the New York State chess championship last weekend continues to dominate many news reports in America and beyond.

Tanitoluwa, who before this time has won seven trophies in chess, has said that his greatest goal his to be the youngest grandmaster.

By this pronouncement, the Nigerian wonder kid is eyeing the place of the current grandmaster, Sergey Karjakin Ukraine, a chess prodigy who qualified for the title at the age of 12 years and seven months.

Clearly, this is by no means a mission impossible for the ambitious boy who is unusually hungry to be on top of the game.

Tanitoluwa, even though a little boy, is not a stranger to challenges which obviously have been helping to build his determination and resolve at this early stage in life.

In 2017, little Tanitoluwa and his family left Northern Nigeria for New York. His father, Kayode Adewumi, recounts that they had to leave their home country because he was afraid they would be targeted by Boko Haram terrorists since they are devout Christians. “I don’t want to lose any loved ones,” he told The Times.

Upon arrival in the US, the available abode for them was a homeless shelter. While waiting on their asylum request to be accepted, the eight-year-old started attending the local elementary school, P.S. 116.
There he met a part-time chess teacher, Shawn Martinez, who taught his class how to play. Adewumi enjoyed the game so much he asked his mom, Oluwatoyin Adewumi, if he could join the chess club. His mother agreed.

She emailed the club to tell them about her son, adding that they could not afford to pay the fees. And Russell Makofsky, the head of the P.S. 116 chess program, decided to waive the fees.

Upon enrolment, he started attending a free, three-hour practice session in Harlem every Saturday and using his father’s laptop to practice at night. His parents also let him miss church whenever he had a tournament to attend.

During his first tournament, he had the lowest rating of any participant, 105. One year later, his rating has gone up to 1587. This is a huge feat considering the fact that the world’s best player, Magnus Carlsen, stands at 2845.

Makofsy, who runs his chess club, says he is very impressed by his progress.

“One year to get to this level, to climb a mountain and be the best of the best, without family resources. I’ve never seen it,” he told The Times.
“He is so driven. He does 10 times more chess puzzles than the average kid. He just wants to be better, ” his chess teacher, name? added.

With his mind set on the biggest prize and continuous progress, Tanitoluwa could possibly emerge at the zenith of the game that he so desires sooner than imagined.