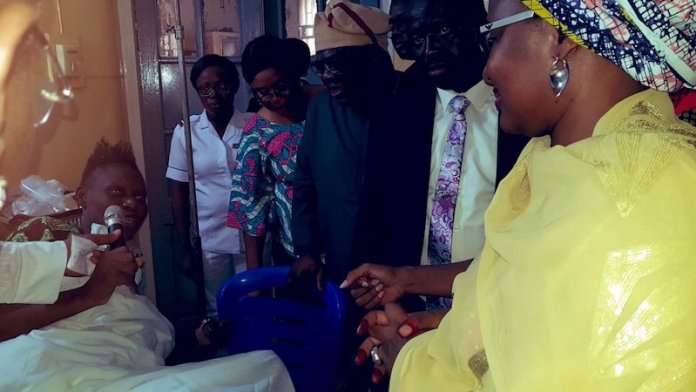 The wife of the President, Mrs Aisha Buhari, on Saturday visited victims of the Ita-Faji building collapse at the Lagos Island General Hospital to sympathise with them.

The wife of the President offered her condolences to the victims of the incident, which claimed the lives of no fewer than 20 people, including school children.

Mrs Buhari, who took time to visit women and children wards of the hospital, prayed to God to grant the families that lost loved ones the fortitude to bear the loss.

She also wished those still on admission speedy recovery.

One of the victims and teacher in the school located in the collapsed building, Miss Easter Samuel, expressed her shock over the incident.

The 19-year-old teacher, who was receiving treatment in the hospital, prayed to God not to experience such unfortunate incident again.

The Chief Medical Director of the Hospital, Dr Gani Kale, said 10 children were admitted in the hospital after the incident.

According to him, three out of the patients have been discharged, having certified their medical fitness.

Kale said there was no case of referral to another hospital.

The wife of the President was accompanied to the hospital by former military administrator of Lagos State, retired Brig.-Gen. Buba Marwa, and former Deputy Governor of Plateau State, Pauline Tallen, among others. (NAN)