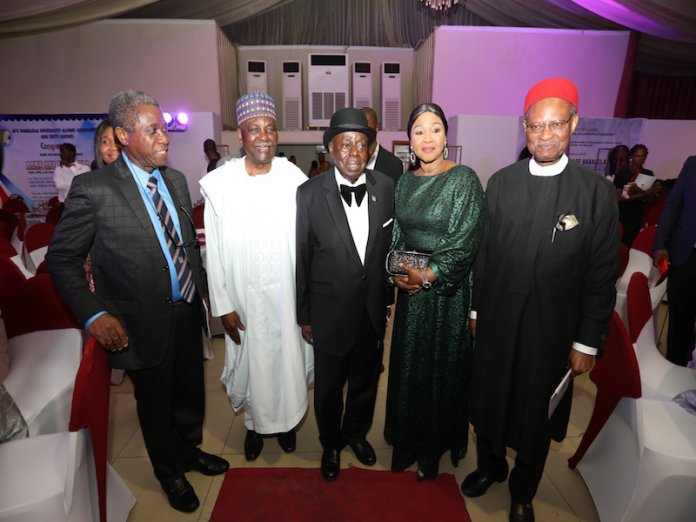 He has been described by many as an advocate per excellence, who has made outstanding contribution to the development of Nigerian Law and Jurisprudence through advocacy in the court of law. The Chancellor and founder of Afe Babalola University, Ado-Ekiti (ABUAD), Chief Afe Babalola has also been an advocate of quality and functional education and has played a major role in higher education.

He recently received the Obafemi Awolowo Prize for Leadership Award 2018, by the Obafemi Awolowo Foundation instituted in 2011 and awarded to individuals who have demonstrated sterling qualities in leadership, good governance, education, caring for the welfare of the masses, consistency of policies and courage. The Awolowo prize awarded every two years consists of a medal, certificate and a plaque.
Babalola has become the third recipient of the award after Nobel Laureate, Professor Wole Soyinka and former President of South Africa, Thabo Mbeki.

“After four long years, we are gathered to honour our 2018 awarded, Chief Afe Babalola, a man who is not only worthy of the honour, but who coincidentally shares many traits with Chief Obafemi Awolowo in his journey to greatness,” she said, adding that like Awolowo, Babalola rose from humble beginnings and had to overcome so many odds to acquire education.

The executive director said Babalola has impacted the lives of many through scholarships and various philanthropic, adding that he has been an advocate of human capital development especially through education.
“He is an unrelenting of political restructuring or federalism in Nigeria. We are proud to welcome him the illustrious company of Awo Prize awardees,” she said.

In his remarks, the former Secretary General, Commonwealth of Nations and Chairman of the Selection Committee, Chief Emeka Anyaoku said Awolowo has been aptly described as the best president Nigeria never had and his accomplishment have remained most admirable aspect of Nigeria’s history.
On his part, the Chairman, Board of Trustees of the foundation, General Yakubu Gowon described the award as a celebration of the 110th birthday of Awolowo, saying that the sage’s noble virtues and high ideals of integrity, selflessness, public spiritedness, philanthropy and strict self-
discipline, as well as the pursuit of excellence in leadership and good governance easily put him in the pantheon of great historical figure.
Ekiti State Governor, Kayode Fayemi described the leadership award conferred on Babalola as truly deserving, saying that he values education and also happened to have walked the same path like the sage to educate himself.

He said the state, being a fountain of knowledge also prepared him for what was being witnessed at the programme.
“Aare Babalola went through the same experience Papa Awolowo went through to go to school and get educated that is why they have both given much to education. For those who recognise that education is an antidote to poverty, you cannot but recognise the efforts of Afe Babalola in the field of education.”

Fayemi described ABUAD Teaching Hospital as the best ever in the country to be put in place by an individual, saying, “papa we are proud of you,” while describing Babalola, a Senior Advocate of Nigeria (SAN), as an exemplar and a passionate believer in hard work.
In his response, the award recipient thanked the governing council and board of trustees of the foundation for finding him worthy of the honour and for the privilege to join the eminent past recipients of the award.

“It is one of the greatest joy of my life that I am associated with an award named after an accomplished leader of men, iconic pan-Africanist, resolute nationalist, astute administrator, consummate family man, bridge builder, revered leader of the Yoruba people and one of the greatest African leaders of all times, Chief Jeremiah Obafemi Awolowo.”

Babalola, who delivered a lecture at the occasion titled, ‘Awoism and the Unending Search for Transformation Leadership in Nigeria: Political, Economic, Educational and Social Challenges’, extolled the virtues of the sage, saying that the award is a direct call to reflect upon and exemplify the principles of good governance, selflessness, public spiritedness and transformation leadership, which Awolowo exhibited all through his life time.

The legal luminary described Awolowo as an arrow head and defender of the rights of the Nigerian people to qualitative education, adding that he was instrumental to providing free primary education in the western region and the establishment of Obafemi Awolowo University (OAU), formerly known as the University of Ife.

“His vision for OAU was to promote quality university education, character development and Spartan self-discipline,” he said adding that the lofty ideals and visions of the founding father of OAU, which is to reform and promote qualitative education in the country are the same visions and ideals he has championed and dedicated his life to.
He expressed concern about the infrastructural decay and other challenges confronting the university system while describing the situation as an unbearable dishonour to the legacy of Chief Awolowo.

“It was the commitment to play a role in reforming Nigerian educational system that spurred me to initiate diverse reform programmes during my tenure as the Pro-Chancellor and Chairman, Governing Council of the University of Lagos. Many of the achievements we recorded during the period have been lauded and remain a reference point till today, including being adjudged twice as the best pro-chancellor in Nigeria,” Babalola stated.
Emphasising on the establishment of ABUAD in reaction to the rot in public universities, he said, “this same vision led me to establish ABUAD in 2009. Since then, it has grown astronomically in reputation and has won several national and international awards and recognition as the fastest growing university in Africa and as a shining beacon of university education in Nigeria.

“The reforms we embarked on at ABUAD cut across curriculum development, practice-based learning, funding, teaching research and entrepreneurial and vocational skills. Consequently, just eight years of existence, the institution has been recognised by the Nigerian Universities Commission (NUC) as a model, benchmark and reference point for other universities, as well as the pride of university education in Nigeria.”
He regretted the poor funding of education and failure of successive Nigerian government to build world class universities in the country and meet UNESCO funding benchmark of 30 per cent to address the current infrastructure deficit.

“In Nigeria, the 2017 budget, N448.01 billion was allocated to education, representing only about six per cent of the N7.30 trillion budget. As a signatory to these important international law instruments, Nigeria has a fundamental obligation as a responsible nation, to fully respect, protect and fulfil the right to education of every citizen in accordance with the provision of international law.”
The legal luminary therefore stressed the need for the government to provide robust financial support for public universities, as well as set aside special finance to also support the establishment of private universities so as to bridge the gap of insufficient space for interested and qualified university candidates.

Also he said government should set up more scholarship schemes and avenue for students to obtain loans to finance their education.
“Government must appreciate individuals who have the means and interest in education. This is why I am thanking the Awolowo Foundation for appreciating what I am doing in education,” Babalola said.