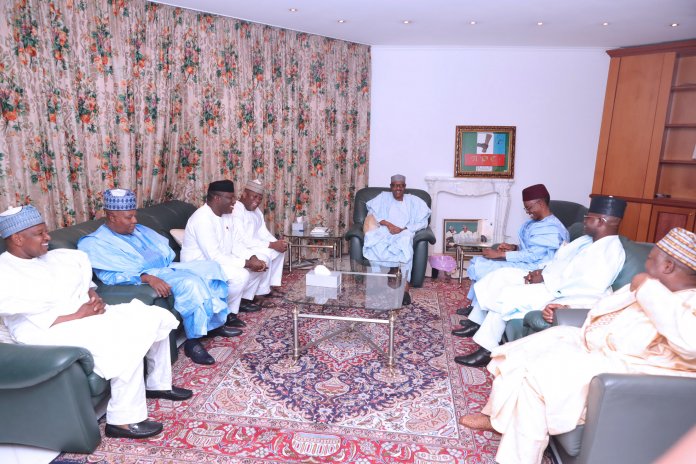 The meeting, said to be initiated by el-Rufai, it was learnt, was aimed at mapping out strategies to save four APC governors and two governorship candidates of the party walking the tight rope following the declarations of inconclusive elections in their respective states.

In the two other states of Sokoto and Benue, two Peoples Democratic Party (PDP) governors, Aminu Tambuwal and Samuel Ortom, respectively, who had dumped the APC for opposition PDP last year, are already holding sway. But APC also looks determined to unseat them and take charge of governance in the two states.

While the opposition was leading in five of the affected six states before the elections were declared inconclusive, the APC was leading only in Plateau State.

The elections in these states were declared inconclusive by the Independent National Electoral Commission (INEC) because the number of cancelled votes at the polls exceeded the margin between the winner and the runner-up.

According to an online medium, Sahara Reporters, the essence of the governor’s meeting with the president Tuesday was to convince Buhari to interfere in the conduct of the rerun elections.

According to the medium, the interference of the president in the forthcoming supplementary elections was sought by the governors with a caveat that “if the governors of Adamawa, Plateau, Kano and Bauchi states are sacked in this manner, it will be a slap on the APC as a whole, therefore Mr. President must wade into the matter to save the situations.”

However, while State House correspondents awaited the end of the meeting Tuesday with a view to asking the governors questions on the rationale behind the meeting, they did not come back to the press crew to brief it on their mission in the State House.

Against this background, it could not be ascertained at press time if the president acceded to their request or not.

Oliseh: Current Players Must Be Consulted before Biennial World Cup