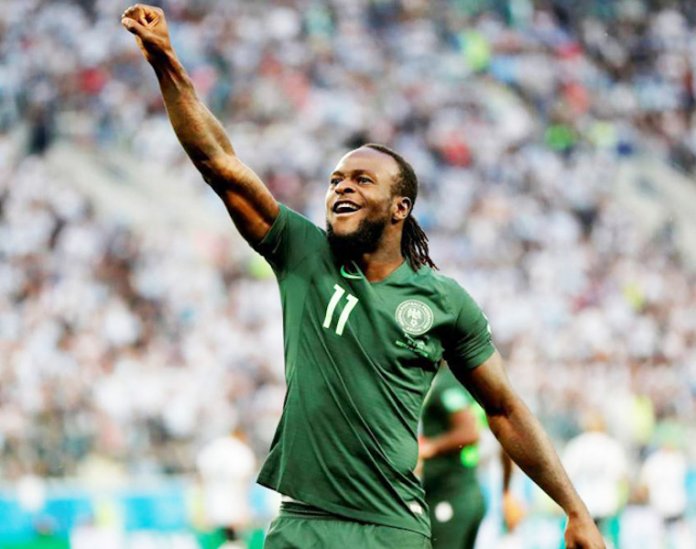 Super Eagles Technical Adviser, Gernot Rohr, has confirmed that Victor Moses has not reversed his decision to quit the national team ahead of the 2019 Africa Cup of Nations.

The Chelsea loanee is enjoying a new lease of life at Turkish side Fenerbahce, for whom he has scored two goals in the last six matches in the Super Lig, and there was speculation he was to be recalled for this month’s games against Seychelles and Egypt, which has not happened.

Having represented the Super Eagles at the World Cup, Moses called time on his international career in August 2018, citing family and career concerns.

Speaking to the official website of Confederation of African Football, Rohr said : ”I was against his international retirement and, if he changed his mind, he must tell me but I have no information about it. We’ll see,” observed Rohr at the weekend.

On the situation of his captain, John Mikel Obi who was omitted from the latest Super Eagles roster released last week, Rohr said : ”He (Mikel) has arrived in Middlesbrough recently. He told me he was not ready and needs to work after his knee injury in China.

”He did not play all winter either. He is not ruled out for the AFCON but could not make that match in Asaba. We will see for the future,” stressed Rohr.

A former England U-17 international, Moses appeared in 37 matches for the Super Eagles and won the 2013 Africa Cup of Nations.

Rohr also defended his decision to hand maiden call-ups to striker Paul Onuachu and defender Valentine Ozornwafor for the upcoming games against Seychelles and Egypt.

The invitation of the FC Midtjylland star was a good public relations move as several Super Eagles fans wanted him in the team thanks to his rich vein of scoring form in Denmark, while the Enyimba defender was one of the players who shone for the Flying Eagles as they qualified for the 2019 FIFA Under-20 World Cup last month.

On Onuachu, Rohr said: ”He has the experience of Europe at the height of his 24 years.

”His size is obviously his strength with his 2m01 and the beautiful goals scored in the Danish championship. This is another profile for us in attack,” observed Rohr with pride.

Explaining the choice of Ozornwafor, the German tactician stated : ”I expect this player to bring his freshness, his physical strength (1m97) and technical quality left-handed.

”It also offers us an additional option since we have a lot of right-handed advocates. I saw him in Niger at the CAN and I like his aerial game.”

Onuachu is the only Scandinavian-based player named to the Super Eagles latest roster while Ozornwafor is the only home-based outfield player selected.