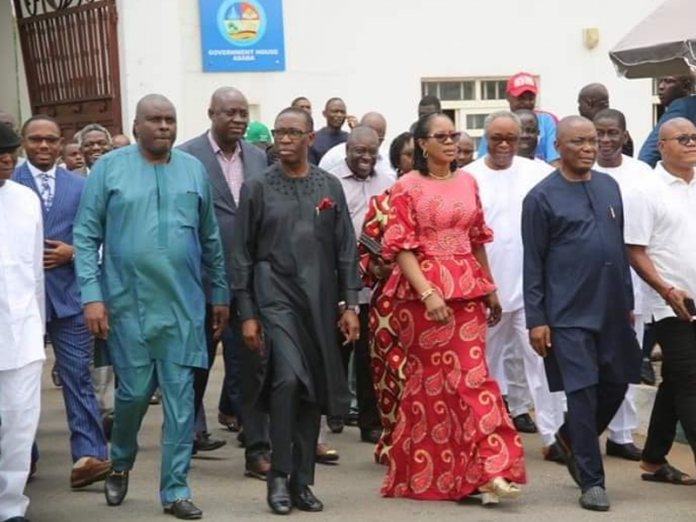 The Delta State Governor, Dr Ifeanyi Okowa, was on Monday joined by former governor, Chief James Ibori, family and government officials at a special thanksgiving service shortly after being declared winner of the March 9, 2019 governorship election by the Independent National Electoral Commission (INEC).

The Government House Chapel was packed to overflowing as the governor, his wife, Edith, wife of the deputy governor, Dr Ebieri Otuaro, and hundreds of Peoples Democratic Party (PDP) leaders including the state Chairman, Mr Kingsley Esiso, and others sang and danced to glorify God for his re-election.

Okowa is regarded as a beneficiary of the principle of rotational power in the state instituted by the Ibori political family when he was governor, a structure that previously produced Ibori and Dr Emmanuel Uduaghan as two-term governors.

However, Okowa said he was dedicating his reelection victory to God who averted the many perilous events predicted before the election, assuring the people that his administration would continue to work equitably for the state irrespective of political differences.

The governor promised to be magnanimous in triumph, saying that his victory is a victory for the unity and progress of the whole state as there was really no victor nor any vanquished.

Okowa said: “We have come here (Government House Chapel) to give thanks to God because, we are a praying state and whatever victory or success we have recorded is as a result of His benevolence. Before the elections, we heard all manners of stories but, we trusted in God and those who led the campaign trusted in God and I want to appreciate everyone of them. I want to appreciate my leader, former Governor James Ibori.

“I must publicly appreciate the Independent National Electoral Commission (INEC) for being very firm and fair and doing what they ought to do as a commission. We must continue to grow and know that whatever we do, it should be in the best interest of the country. I want to appreciate the security agencies for standing for fairness; and I must thank our religious leaders for their prayers and mobilization. We are all victorious together. It is a victory for justice, equity, fairness and a victory that will bring better love in Delta State.

“There is no loser, but this is the time to join hands together and build a greater Delta State. Our opponents should join us as I seek the cooperation, the partnership of all Deltans because, we have done so much but, a lot more will be done in the next four years starting from May 29, 2019. As I ask for your cooperation and partnership as Deltans, I also seek for your prayers. We must work hard to take Delta State to greater heights; we need to be peaceful because, with peace, we will achieve a lot.

“My desire is that as I leave office as Governor in 2023, we should be proud of the job we have done together in our state and give thanks to God; please, trust in the Lord our God.”

The Chaplain of Government House Chapel, Venerable Charles Osemenam, had in a sermon, stated: “Delta State is unique and the uniqueness of Delta makes everything work peacefully.”

In a related development, the state Commissioner for Information, Mr Patrick Ukah, has thanked the people of the state for massively voting the PDP during the election while congratulating Governor Okowa on his election victory.

He said that the victory of Okowa was well deserved and an eloquent testimony that diligent hard work pays as the governor has ”worked round the clock to ensure that inhabitants of the state benefit from his Smart Agenda of his administration”.

Ukah particularly commended the people of Oshimili North Local Government Area for their love for the governor by giving him 37,774 votes against the 2,906 the APC scored, assuring the people of the area of more developmental projects during the second tenure of Okowa.

INEC declared that Governor Okowa polled a total of 925,274 votes against his closest rival, Chief Great Ogboru of the All Progressive Congress (APC), who got 215,938 votes.