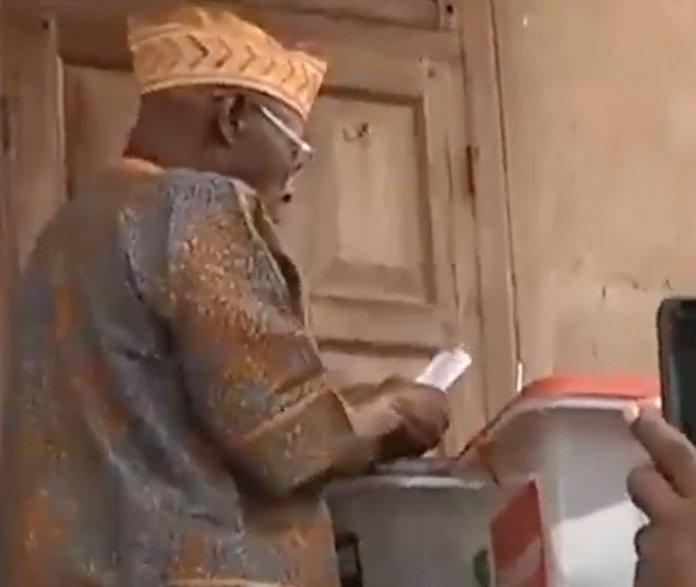 Former President Olusegun Obasanjo on Saturday refused to comment on the conduct of the governorship and House of Assembly polls in Ogun State.

Obasanjo arrived the ward 11, unit 22 of the Olusomi compound polling centre at Totoro-Solori area of Abeokuta at about 9.56 a.m for voting.

The former president, who voted at about 10.08 a.m., refused to speak to newsmen.

After voting, he simply walked pass the waiting newsmen and got into his vehicle waiving and signalling that he had no comments.

Earlier, Ogun State Governor Ibikunle Amosun and a former governor of the state, Chief Segun Osoba, however, expressed satisfaction over the conduct of the polls in the state.

Amosun, who voted at ward 6, unit 8 of Ita-gbangba polling centre at Itoko area of Abeokuta, noted a significant improvement in INEC’s performance compared to the previous exercise.

The governor told newsmen after he had voted that he had received encouraging news of peaceful conduct of the polls across the state.

“There has been a lot of improvement in the conduct of the polls today than the presidential poll.

“The voting process has been peaceful and has taken a shorter period today than the previous exercise which took about 45 minutes.

“We pray that this situation will continue till the end of voting and counting period, and till the announcement of the winner by INEC,” he said.

Amosun, who observed that “there are rooms for improvement”, called for reduction in the number of participating political parties.

He noted that more than 70 political parties participated in the polls across the nation, explaining that “the situation is stressful and cumbersome for INEC and the electorate”.

According to him, the situation is expensive in terms of funding and stressful to organise in terms of logistics.

He added that the development required more efforts on the part of the electorate who needed to check carefully through a long list of political parties on a long ballot paper to identify their preferred party.

Amosun therefore called for a maximum of six political parties in subsequent polls.

“You discover that in advanced countries, results are announced within five hours after polls.

“The reason is because they have very few political parties to cater for and this often quickens the entire voting and counting process.

“I hereby call for a maximum of six political parties in subsequent polls because the country is divided into six-geopolitical zones.

“It is a good thing that I am going to the Senate because this will give me an opportunity to continue to push for this position,” he said.

Osoba, who voted at Ward 14, unit 15 of the Omololu polling centre at Ibara Housing Estate area of Abeokuta, commended the peaceful and orderly conduct of the polls.

The former governor, who expressed concern over the state Commissioner of Police Hammed Ilyasu and called for his transfer during the presidential polls, said the situation had since changed.

“As for the commissioner of police, we have settled. The security situation is very good and heavy presence of security agencies and patrol officers on the roads are evidence of well organised and well planned security arrangement.

“The situation has encouraged the electorate in turning out in large number and I am sure the polls will go on well across the state.

“In summary, my general assessment is that there has been noticeable and significant improvement in terms of logistics, security, turnout and other important variable that can be used to measure the success of the polls,” he said.

Osoba, a chieftain of the All Progressive Congress (APC), urged eventual winners of the polls to be magnanimous in victory and advised losers to take defeat in good spirit. (NAN