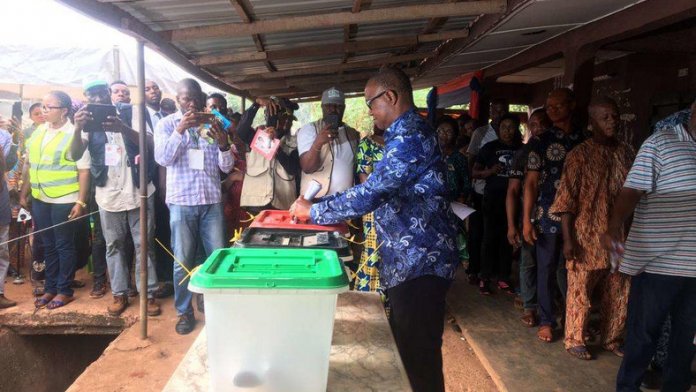 The vice-presidential candidate of the Peoples Democratic Party (PDP) in the just concluded presidential election, Mr. Peter Obi, has decried what he called the “persistent lack of preparedness” on the part of the Independent National Electoral Commission (INEC).

Obi expressed his frustration as he was unable to vote at 9am due to a faulty card reader at his Umumasiaku polling unit, Amatutu, Agulu.

Though he later cast his vote at 12 noon, Obi told journalists that the card reader was the same during the presidential election, when card readers did not work in many places, which INEC acknowledged and promised to correct.

“It is a shame that the same problem repeated itself on grander scale today, with news of faulty card readers all over the state. This has raised the issue of whether the problems are genuine or contrived for other purposes,” he said.

He wondered Why INEC cards should not work due to persistent card reader problems.

The former governor said he was not so keen on who wins the House of Assembly positions in Anambra State.

“I am not so much interested in who wins the state Assembly election as it is family business. My position is that the best candidates should win in order to bring democratic dividends to the people of the State,” he said.

He said that if Nigeria did not get it right, it would remain a problem for the country now and in future.