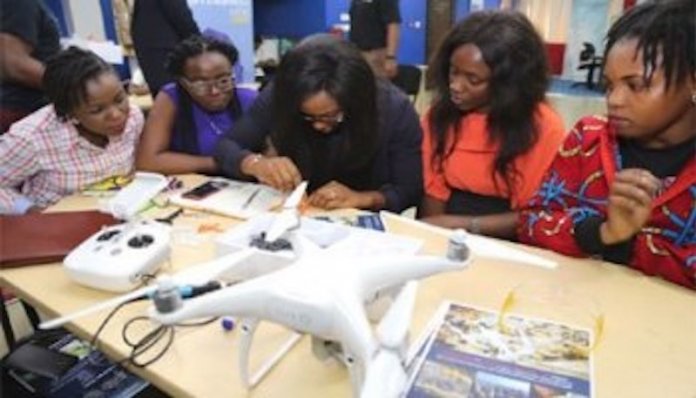 In commemoration of the 2019 International Day of Women and Girls in Science with the theme ‘Investment in Women in Science for Inclusive Green Growth’, Oando PLC, led by a delegation of its female engineers have mentored female pupils in one of the Oando Foundation adopted primary schools, Arch Bishop Taylor Primary School, Victoria Island, on the role and importance of Science, Technology, Engineering and Mathematics (STEM) in the world, why they are passionate about STEM and proud to have built successful careers in it.

The aim of the programme was to provide a platform for the female engineers to engage female pupils towards considering and embracing STEM subjects for a future career in STEM by sharing real life and relatable stories that would inspire the young girls.

In order to achieve full and equal access to, and participation in science for women and girls, and to further achieve gender equality and female empowerment, the United Nations General Assembly adopted a resolution declaring February 11 of every year as the International Day of Women and Girls in Science. According to the United Nations (UN) “a significant gender gap has persisted throughout the years at all levels of STEM disciplines all over the world. Even though women have made tremendous progress towards increasing their participation in higher education, they are still under-represented in these fields.”

Globally, less than 30 per cent of researchers worldwide are women. According to UNESCO data (2014-2016), only around 30 per cent of all female students select STEM-related fields in higher education. Worldwide, female students’ enrolment is particularly low in ICT (3 per cent), natural science, mathematics and statistics (5 per cent) and in engineering, manufacturing and construction (8 per cent).

In a bid to fight the long-standing biases and gender stereotypes steering girls and women away from science related fields, a cross section of Oando’s female engineers spoke to the pupils on a wide range of STEM related topics such as: Why mathematics and science are important in the real world; opportunities that exist for girls/women in STEM; as well as games and engaging activities intended to stimulate the pupils’ interest in the sciences.

Researches from different bodies are singular in their belief that there is little to no difference between boys’ and girls’ average ability in STEM subjects, however girls are still lagging behind boys in studying and in a career in STEM. In order to attract more girls to aspire to STEM careers, experts suggest the need to encourage young women through mentorship programmes, creating an enabling environment and profiling women in science as role models. Such initiatives can inspire and encourage young women and girls to become more confident in their capabilities and can serve to empower aspiring and early career women scientists.

One of the mentors, the Principal Reservoir Engineer, Oando Energy Resources, Seun Solanke advised the girls to be proactive in their research into STEM-related careers. She also spoke extensively on what motivated her to a career in the sciences.

The Project Planning and Controls Engineer, Oando, Lolade Shebanjo said: “I felt fortunate to be surrounded by future female scientists. I was reminded of the fact that when you wear a helmet, it doesn’t matter if you are a woman or a man; your mission is to keep achieving.”

Also, the Project Document Comptroller, Oando, Abimbola Otulayo said: “It was awe-inspiring seeing the little girls’ faces light up with attentiveness and interest during the sessions. I am definitely inspired to do more to help the youth of Nigeria.”

Through its independent charity, Oando Foundation, Oando is setting the pace for other corporates by adopting dilapidated public primary schools across the country; carrying out infrastructural upgrade in these schools; training teachers and establishing digital learning (ICT) centres to promote STEM, aimed at creating a more conducive learning environment and improving learning outcomes for pupils.

To date, Oando Foundation has established 46 ICT centres in its adopted schools impacting over 45,000 pupils; a deliberate attempt to encourage an interest in technology and science from an early age because innovative technology would not be possible without scientific research.

Speaking during the event, the Programme Manager, Oando Foundation, Tonia Uduimoh emphasised the need for girls to embrace STEM at an early age. “It is pertinent for young girls to understand that STEM subjects and careers are not for a select few; that with hard work and a real desire they too can excel in subjects that will enable them build successful careers in STEM. Globally, it is estimated that the percentage of young girls enrolling in STEM-related courses is relatively low compared to their male counterparts. The resultant effect of this becomes evident with fewer women pursuing long-term careers in STEM.”

Women make up over 50 per cent of the population of Africa and form the majority of the work force in most African countries. However, women account for only 30 per cent of the workforce in STEM fields in sub-Saharan Africa. The presence of women in STEM careers is essential to ensure the continent realizes its full potential of innovative solutions to Africa’s developmental challenges. February 11 serves as an opportunity for African countries, Nigeria included to reflect on the importance of science and technology to the development of the continent.

Science-related fields are critical to developing national economies, unfortunately, most countries are yet to achieve gender equality in STEM. To bridge this gap Uduimoh said: “At Oando Foundation, we are committed to changing the narrative, particularly for young girls in our adopted schools. We are achieving this through various initiatives such as the digital literacy component of our Adopt-a-School programme that provides solar-powered ICT centres for effective curriculum deployment in schools; the Girls Code Club that is empowering young girls with technology skills through creativity and learning, among others.”

Speaking on the initiative, the Head, Corporate Communications, Oando, Alero Balogun said: “When barriers to the participation of women and girls in STEM fields are removed, women do better, countries do better, and the world does better. To ensure more female participation in STEM, we need to create an enabling environment for them, starting from the primary level of education where their interest can be piqued at a very young age and they can then be gradually and intentionally steered into STEM careers. “For us at Oando, we didn’t want today to just be another international day; we wanted it to be a day that we could proudly say we contributed our quota no matter how small to changing the way girls think about STEM.”

In a joint statement, the Director-General of UNESCO, Audrey Azoulay and the Executive Director of UN Women, Ms. Phumzile Mlambo-Ngcuka said: “Young women scientists are already making a difference in the fight against climate change, including South-African teenager Kiara Nirghin, whose inventions minimize the impact of droughts. By harnessing the creativity and innovation of all women and girls in science, and properly investing in inclusive STEM education, research and development and STI ecosystems, we have an unprecedented opportunity to leverage the potential of the Fourth Industrial Revolution to benefit society.”